As expected, Pine64 PineTab Linux tablet with Allwinner A64 processor, 2GB RAM, and a 10.1″ touchscreen display has just launched for $99.99 or $119.98 with a detachable backlit keyboard on Pine64 Store. Note those are pre-orders with shipping scheduled for the end of July. 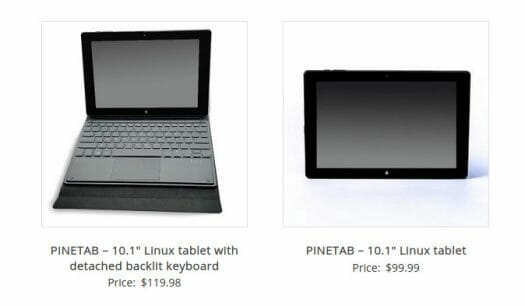 PineTab won’t shatter performance records with a quad-core Cortex-A53 processor with Mali-400MP GPU, 2GB RAM, 64GB eMMC flash, but it’s one of the rare Linux tablets on the market, and certainly the most affordable. The tablet offers a decent set of features too with a 10.1″ 720p capacitive display support for M.2 SATA SSD, Mini HDMI output, front-facing, and rear cameras, built-in WiFi and optional 4G LTE via the M.2 socket. It also comes with a 6,000 mAh battery that should be good for many hours.

PineTab also leverages all the software work done since the launch of Pine A64 board in 2016 including mainline U-boot and Linux development from linux-sunxi community, and will also benefit from the software developed for the company’s PinePhone Linux smartphone with three operating systems currently supported: UBPorts, postmarketOS, and Arch Linux Arm. All resources to get started and download links can be found in the Wiki.

Pre-ordered PineTab tablets will ship with UBports OS (fork of Ubuntu Touch), and should still be considered beta, so the first launch is mostly for enthusiasts who don’t mind about bugs here and there, or missing features. All Pine64 hardware is community supported and sold with barely any profit, so the usual warnings apply to PineTab as well:

Small numbers (1-3) of stuck or dead pixels are a characteristic of LCD screens. These are normal and should not be considered a defect.

When fulfilling the purchase, please bear in mind that we are offering the PineTab at this price as a community service to PINE64 communities. If you think that a minor dissatisfaction, such as a dead pixel, will prompt you to file a PayPal dispute then please do not purchase the PineTab. Thank you.

It seems a lot of people are interested, the site is currently down 🙂

Is it arch or manjaro?

Can i modify kernel/boot(loader?) to turn on the tablet when charger plugged (ac power on) and detect ac power loss(and turn off) from a custom (gecko-based) kiosk application? We did these with android tablets, but its required root rights (we used to use Huawei tablets, but cant root them anymore…).

Can i run light Unity3D projects on this os/device for example?

Besides the open lima drivers also the arm mali driver is available.

Auto power on is the usual behaviour if no battery present, with battery im not sure.