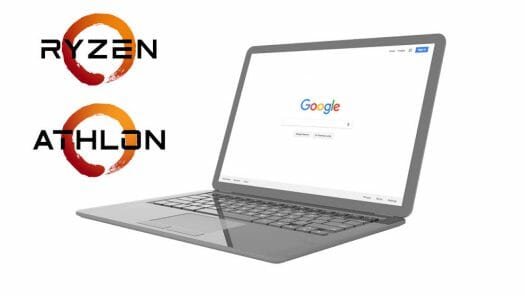 There are currently five 15W Ryzen/Athlon 3000 C-Series processors for Chromebooks.

All processors are manufactured with a 12nm CMOS processor and look to be based on existing AMD U-series processors namely AMD Ryzen 7 3700U, 5 3500U, Ryzen 3 3250U, Athlon Gold 3150U, and Athlon Silver 3050U. All basic parameters are the same on AMD Chromebook-optimized processors, and it’s unclear to me what the differences are exactly.

AMD also reported other performance metrics around with AMD Ryzen 7 3700C Mobile Processor offering up to 251% better graphics performance, up to 104% faster office productivity performance, and up to 152% better photo editing performance compared to AMD A6-9220C powered Chromebooks. The performance delta looks impressive on paper, especially AMD A6-9220C was unveiled less than two years ago until you realize A6 is a 6W processor, while the new processors are listed with 15W TDP.

AMD 3000 C-Series Chromebooks are expected in Q4 202 from Acer, ASUS, HP, Lenovo, and others. More details may be found on the press release and product page.

So this means that the previous CPUs were more efficient then, if they achieve 50-60% of the new one’s performance using only 40% of their power usage. Of couse when you factor every power-eating device in a laptop, it may happen that the whole new laptop completes a task using less energy (race to halt), but that remains to be verified.

Along with the Excavator-based A6-9220C and A4-9120C at the lower 6W TDP, this is a lot of Chromebook SKUs. Watch Chromebooks with the top two get priced above Ryzen 5 4500U systems or something stupid like that.

These laptops have no chance of running Linux?