Raspberry Pi Trading has just launched 32 different models of Raspberry Pi CM4 and CM4Lite systems-on-module, as well as the “IO board” carrier board.

Gumstix Raspberry Pi CM4 Uprev is the same except it adds a Google Coral accelerator module. 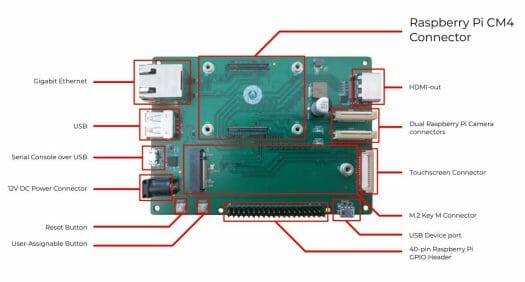 The board is quite more compact than Raspberry Pi’s official IO board, and is designed to develop production-grade embedded hardware for robotics, AI at the edge, and advanced industrial automation. 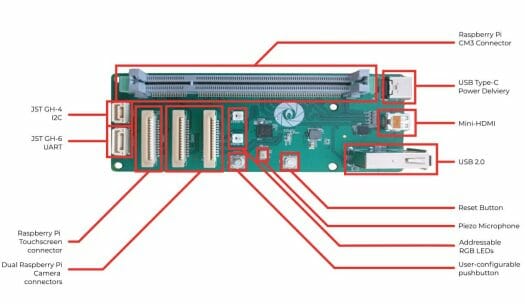 That’s one is a small robotic breakout board designed for Raspberry Pi CM3, but it can also be used with Raspberry Pi Compute Module 4 thanks to the aforementioned adapter board.

With autonomous vehicles in mind, the board comes with two Raspberry Pi camera connectors for stereoscopic depth mapping for object avoidance or front- and back-facing cameras for feature identification or manual control.

Another board that combines RPi CM4 module support with a Google Coral accelerator module. Gumstix Raspberry Pi CM4 PoE Smart Camera board also features a Gigabit Ethernet port with PoE, a camera connector, and as such offers a solution for image classification, object identification etc.. with low latency and single-cable deployment. 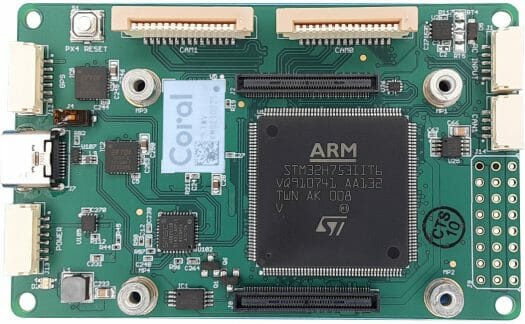 The last carrier board from Gumtick is made for drones as it complies with Pixhawk‘s v6 specifications for Flight Management Units (FMUs). The board features an STM32H7 Cortex-M7 microcontroller with 2MB Flash, a Google Coral module, various sensors (accelerometer, magnetometer, gyroscope, and barometer), two camera connectors, standard Pixhawk data and power connectors (GPS, analog power, RC, and CAN connectors), and octal PWM outputs. There are programming ports to flash CM4’s eMMC flash and STM32 firmware, as well as monitor their respective serial consoles from the same USB Type-C ports.

All boards without a Google Coral module are available now, while boards with the AI module are shown as “Coming soon”. Prices are as follows:

You can purchase or pre-order to boards on Gumstix store. Since all boards are designed with Gumstix web platform, you can also customize the boards in your web browser to better match your requirements, and the company is currently waiving the usual $1,999 manufacturing fee for “qualified” CM4 custom designs until the end of the year, meaning customers only need to pay for the cost of the board and quantity ordered, plus tax and shipping.

As a side note, Gumstix is not the only company offering a promotion for custom CM4 carrier boards, as Seeed Studio offers around $500 in sponsorship for boards manufactured through its Seeed PCB Assembly service and if you sell the boards via the Seeed Marketplace. The company offers to manufacture 5 boards for free, with two sent to the designers, and three placed on the marketplace. Check out the relevant blog post for details.

Pitty the development board is so expensive compared to official rpi io board, i like the m2 slot for a nvme ssd

It would be interesting if every Pi5 and up had an AI accelerator in the SoC.

Does this CM4-to-CM3 adapter work with the Turing Pi cluster motherboard?
I’d like to use CM4 modules to upgrade the performance of my current CM3 cluster.

It should work electrically, but this will add to the thickness of modules, so you’d have to make sure this works mechanically, and cooling may become an issue as well.

As a side note, I can see a Turing Pi 2 is in the work for CM4 modules. It looks like they still use SO-DIMM slots, so they will probably have an adapter of their own.

Yes, they will have an adapter and a very thick heatsink, and I decided to write about it: https://www.cnx-software.com/2020/10/21/turing-pi-2-mini-itx-cluster-board-takes-four-raspberry-pi-compute-modules-4/ 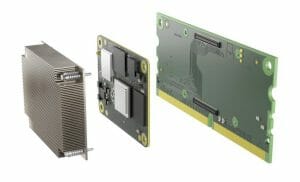