SiFive may just have announced a mini-ITX motherboard for RISC-V PCs, but if you’d like a RISC-V Linux platform in a more compact form factor, Sundance PolarBerry may better fit your requirements, albeit the board will target different use cases.

Powered by Microchip PolarFire RISC-V SoC FPGA, PolarBerry is both a single board computer with Gigabit Ethernet and 40-pin GPIO header, as well as a system-on-module thanks to three Samtec board-to-board connectors. 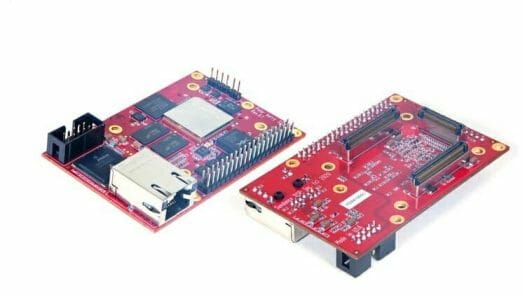 Just like Microchip own’s Polarfire Icicle development kit, PolarBerry will be supported by the Microsemi Mi-V ecosystem with Yocto, BuildRoot, FreeBSD as well as FreeRTOS, Zephyr, and others RTOS, and popular compilers such as GCC, IAR, and others. Supported tools include Renode & Libero, and the board will ship with a free Libero Silver License renewal (for free) each year.

While the board can be used as a standalone single board computer, it is also a system-on-module compatible with carrier boards such as the Sundance DSP SE215 pictured below with another module from the company.

PolarBerry is said to be best suited for applications that require high-performance at relatively low power with military-grade security and a real-time Linux-capable RISC-V processor such as autonomous vehicles or defense applications.

PolarBerry is not available just yet, but LinuxGizmos reports the SBC/SoM will be soon launched on Crowd Supply for $995 and shipments are expected to start in January 2021 [Update November 3rd: PolarBerry crowdfunding campaign has just started for $750 for the SoM, $750 for the carrier board]. Besides the aforementioned crowdfunding page, additional details may be found on the product page.

Just was a bit confused if it was now a soft core or a real cpu.

And as far as the microchip leaflet’s block diagram shows it seems its a cpu in silicon paired with some fpga fabric, like the compeeting zynq soc.

Maybe not long until microchip comes with riscv based PICs?

jeebus, can risc-v board vendors price things affordably? why would anyone prototype anything on this vs cheap x86 or arm sbcs

Because it has an fpga for custom logic interfaces, check what products are based on zynq SOCs, often high-speed logic analysers or SDRs or similar data acquisition systems like i.e. measurement equipment.

* While the board could be used as a stand-alone single-board-computer.

You’ll need to wait a few years for Allwinner or someone to switch over then. I wouldn’t keep your hopes up though.