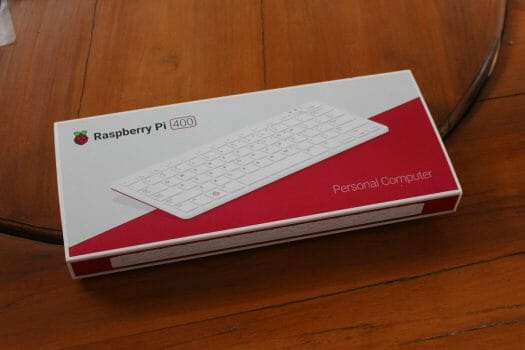 The Raspberry Pi Foundation has gotten us used to wait for a while between new hardware releases, but right after having announced Raspberry Pi CM4 and CM4 Lite a couple of weeks ago, the company has now introduced Raspberry Pi 400 keyboard computer with many of the same features as Raspberry Pi 4 single board computer, but as a fully integrated computer inside a 78-key keyboard, and equipped with a slightly faster Broadcom BCM2711C0 processor clocked at 1.8 GHz instead of 1.5 GHz. 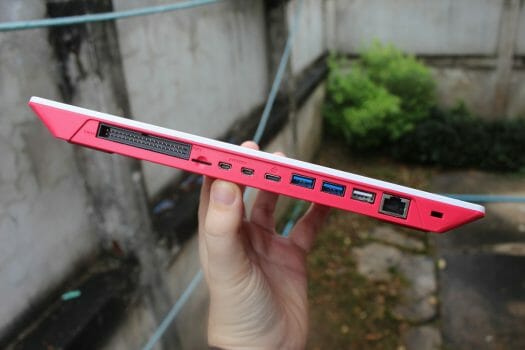 All ports and the 40-pin GPIO header can be conveniently found on the back of the keyboard PC. Most Raspberry Pi 4 features are included, except for the CSI (camera) and DSI (display) connectors, and PoE support. A USB 2.0 port is gone, probably for the keyboard itself.

Raspberry Pi 400 is software-compatible with RPi 4 and supports Raspberry Pi OS as well as 3rd party operating systems such as Ubuntu, OSMC, and so on. I remember I first got my taste of computers at school with a Thomson TO7 keyboard computer, although Commodore 64 might be more popular around the world. So I suspect it may be popular in schools since it’s more compact and easier to move around than a Raspberry Pi plus a separate keyboard.

You’ll find more details in our teardown and our Raspberry Pi 400 review where we focus on thermal cooling and differences against Raspberry Pi 4. The first keyboard computer from the Raspberry Pi Foundation can be purchased for $70 plus shipping and taxes in the usual places including  RS Components, Cytron, Element14, Seeed Studio, and many others. There’s also a $100 kit with the keyboard computer, power supply, mouse, 16GB MicroSD card pre-loaded with Raspberry Pi OS,  a micro HDMI to HDMI-A cable, and a user’s guide.

Nicely integrerad, by why doesn’t it use eMMC for the OS?

Now I’m so sure anymore whether I used Thomson TO7 or MO5 at school.

MO5 was the small, black one (looking like the ZX81), while the TO7 was the larger gray one.

Well I put a link to wiki but its been deleted.

ZX Spectrum had connectors all a long the back.

Why not use the CM4 and make a new carrier board for this?

Probably because they expect to sell a lot of them.

I would like to have the full-sized HDMI there or at least more space between micro HDMIs, so it will be compatible with more adapters for dual screen setups. But well, they clearly wanted to have everything soldered to one PCB here tu cut costs. At least it’s consistent with basic version… There is one thing which is interesting for me tho, the new CPU revision. Is it done in new lithography or maybe the just stored selected, better performing CPU dies? Are we going to see updated basic raspberry pi 4 with this processor? I think, at least first… Read more »

Probably also a product of a large PCB allowing them to dissipate more heat.

Or the huge keyboard sized heat sink they attached to the processor and USB chip.

I love the design. I’ve always liked a lot fully-integrated computers. Having started with these with everything under the keyboard, just having to plug a few cables and voilà! This thing can be convenient for hacking in various ways, even to control various machines with a small LCD or a few LEDs for feedback. I think I’ll buy one even if I have no use for it 🙂

Is it available with azerty keyboard?

It looks like they only have a french azerty, not a Belgian one

Damn! No swiss qwertz… This is the only french layout I’m finding convenient to use.

No need posting the same question under every article…