The BBC Doctor Who HiFive Inventor Coding Kit was announced at the end of November 2020 with the goal of teaching IoT to young kids. But one day,  I noticed the postman left a package on the ground right next to my house’s gate for some reason. I had no idea what it could be until I read it was from SiFive on the package.

So here I am about to review BBC Doctor Who HiFive Inventor Coding Kit! The package actually included two small packages with one being an “expansion board”… 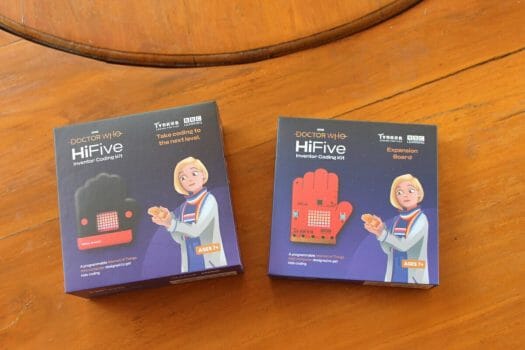 We’ve already written about the specs in the announcement post, but here they are again for those who forgot it’s based on SiFive FE310 RISC-V microcontroller and ESP32 for WiFi and Bluetooth. 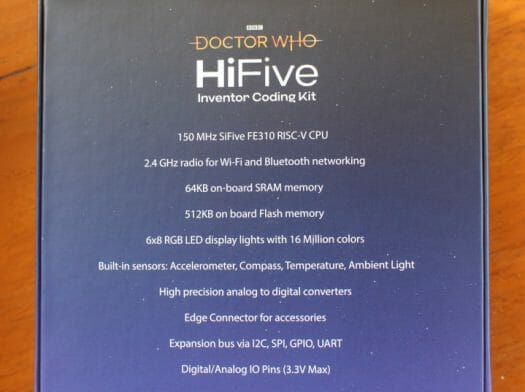 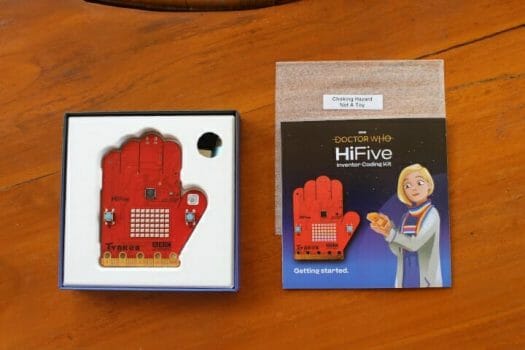 It’s actually the HiFive Inventor board – aka the mainboard – that comes with a getting started guide as well as a USB-C to USB-A cable to connect to the host computer. 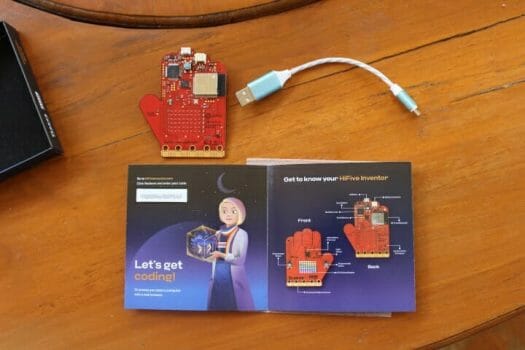 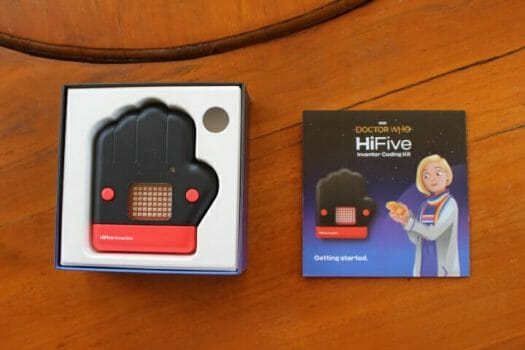 We also have a few other accessories including alligator clips, a speaker board, and a battery box for three AA batteries. 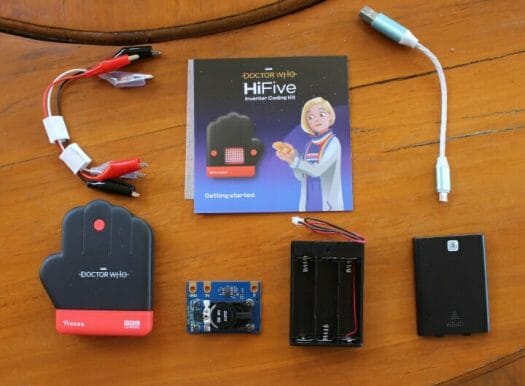 Registering the board and following the teaching guide

We can put the board aside for while, and go through the registration process. We’re being told to register the board with the code in the getting started guide @ https://www.hifiveinventor.com/. 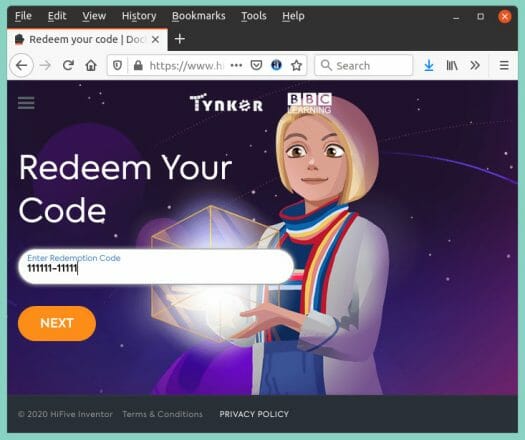 Then I had to go through an identity crisis of sort having to decide whether I was a student or a childless parent. 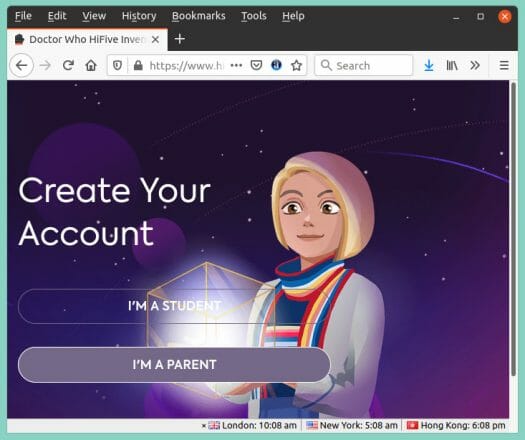 I went with the latter, and also had to create a student account in the process. Finally, I had access to the main dashboard. 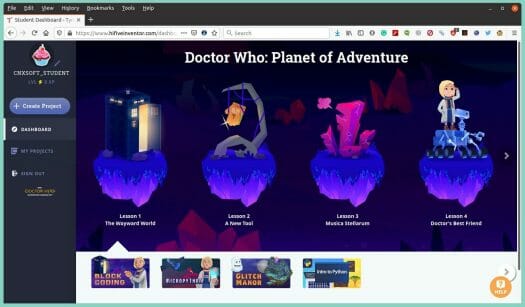 The first lessons take us through the basics of visual programming using a storyline from Doctor Who with music, and text that’s narrated by a voice-over artist. At some point, the heroine finds human technology on some faraway planet that happens to be our HiFive Inventor board. 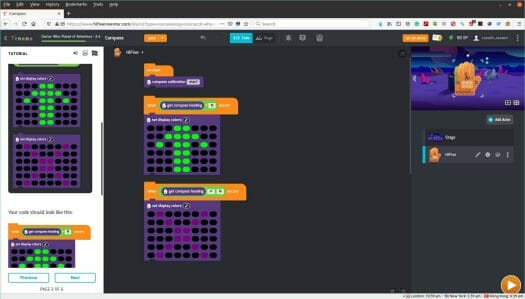 The first lesson where we are asked to program the board tells us to use the compass to display a green arrow when the kit is oriented to the north or a red cross in the other cases. 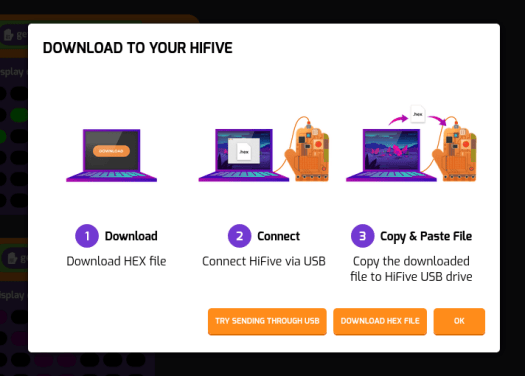 It would have been extra nice to get the resulting firmware uploaded from the web browser, but instead, we are asked to download the hex file (tynker.hex), connect the board,

and then use our OS file manager to copy tynker.hex to HiFive USB drive. 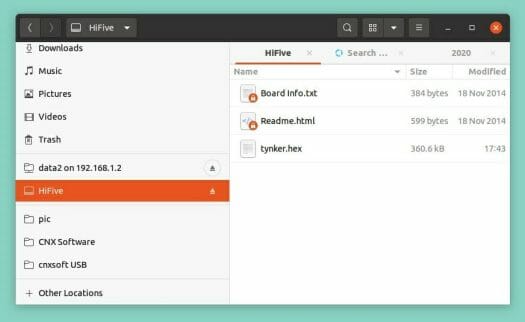 We’d have to do for each lesson. It’s possible to save progress, so the student can resume learning where he/she left off.

Once the student has mastered visual programming, he/she can switch to MicroPython lessons. 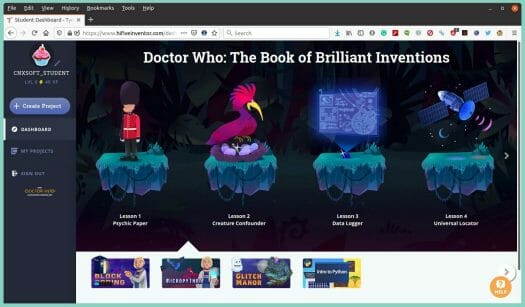 Unsurprisingly, the first lesson is a “Hello World” example. 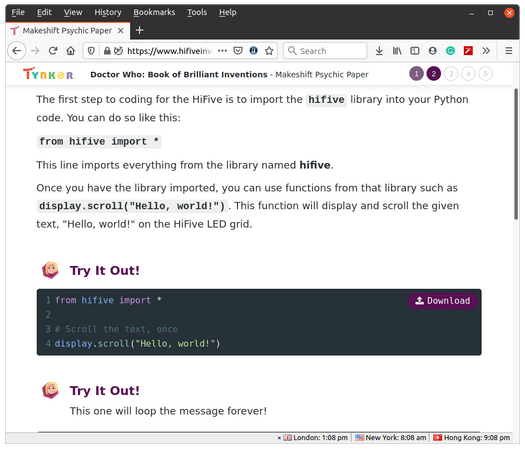 But it’s not your usual “Hello World!” showing in a serial console, as it will be displayed on the RGB LED matrix instead. Just like for the visual programming tutorials, we are asked to download a file (hifive.hex) and copy it to the HiFive USB drive. 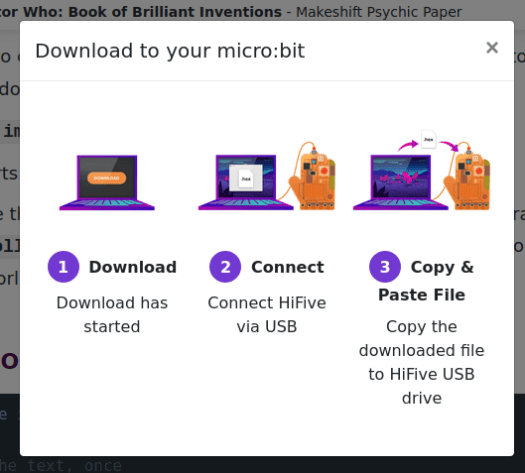 So that’s “tynker.hex” for visual programming, and “hifive.hex” for MicroPython. Nevertheless, this worked just fine, and we got the text scrolling once. That also means it does not support “live” MicroPython programming as we have to copy a binary file each time.

The lessons are getting more complex as we progress, and let’s jump to the “Music Tracker” lessons to try out our speaker! 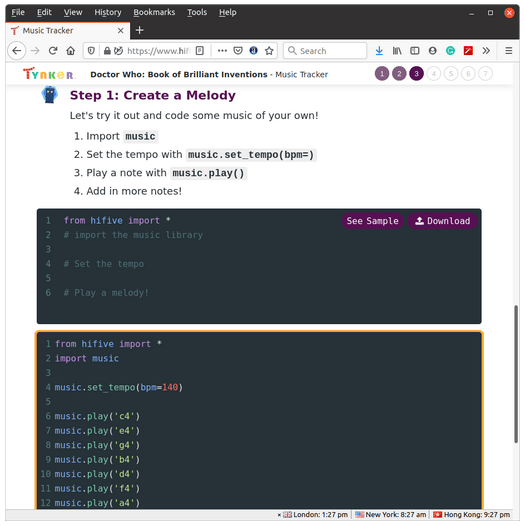 Somehow, I never managed to get any sound coming out of the speaker even after making sure there are no short-circuit with the alligator clips. I suppose that means I miserably failed first-grade… MicroPython is not as fun anyway as there’s no music nor storytelling in the web interface 🙂

So if your student moans that MicroPython is sooo boooring, you can always take a break and switch to the Glitch Manor section where he/she will learn how to create games with Tynker visual programming. 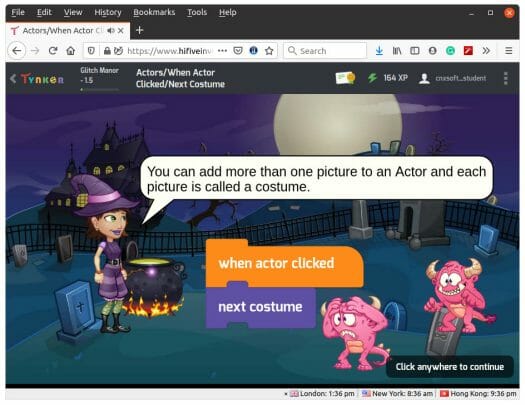 But you only learn so much by playing, so at some points, your student may want to switch to more formal learning by going through the fourth section of the web interface: “Introduction to Python”. This teaches the basics of Python programming, and the common errors made by programmers such as forgetting a parenthesis, spacing issues, and other syntax errors. 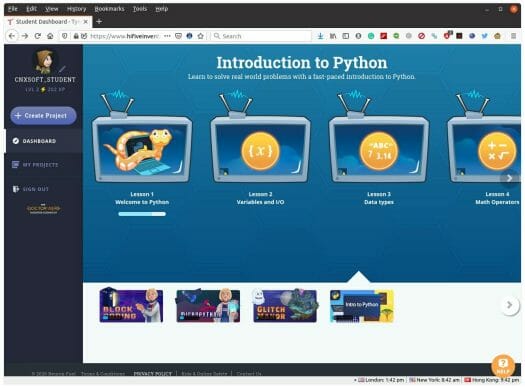 BBC Doctor Who HiFive Inventor Coding Kit feels like a nice educational platform to let kids learn about IoT and sensors using both Tynker visual programming and MicroPython. The web interface used for teaching is entertaining at times with storytelling while learning visual programming, and more formal educational materials are provided to learn MicroPython although it still goes through step-by-step tutorials. A supervising adult is probably needed to guide the student, or maybe I’m just underestimating 7-year old kids.

If you think it would be a good present for your kids you can order the full kit on Amazon for $74.95. I was unable to find the “expansion board” kit for sale at this time.

Why would anyone want anything connected to that awful show?
They completely ruined one of my all time favorite franchises.
Burn them all! Burn them all to hell!

Is it possible also to give the set as a present also to someone else after using it( i.e. Does it have an unregister function for the hardware and the tynkers academy)?

I’ve just sold mine. I could not find a way to unregister it, and indeed the new owner was unable to redeem the same code again. I ended up giving him the username and password of the parent acccount, and he could create a new student.