MINIX NEO P1 is a 66W USB-C power supply/charger that can handle up to 3 devices, but I’m already using its big brother NEO P2 (100W) to power single board computers or other compatible devices that I may have to review.

So instead, I plugged it in my bedroom’s power extension since it’s so tiny and provides three extra USB ports for charging devices. The problem is that two of those are USB-C ports, and I don’t own any USB-C to USB-C cable, so I went shopping for such cables, but soon realized I could probably “save money” by purchasing USB-C to USB-A adapters for less than one dollar each as I already own several USB-A to USB-C / micro USB cables. 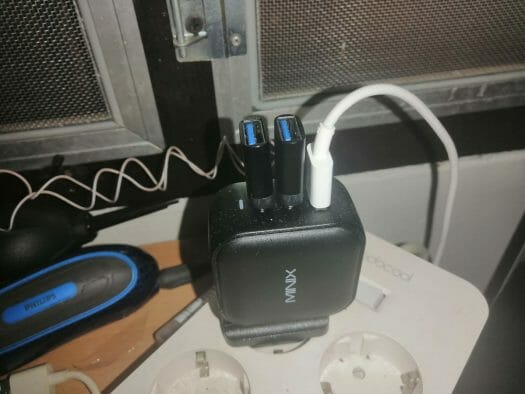 I got two of those and inserted them in the tiny USB PD charger. Spacing between the two USB-C ports was wide enough to the adapter fitted just right, and it looks great!

So let’s try to charge a smartwatch… hmmm it does not work… using the other port yields the same result. Nevermind maybe just an incompatibility issue. So let’s switch to a phone, and… still not charging. Is there a problem with the adapters? 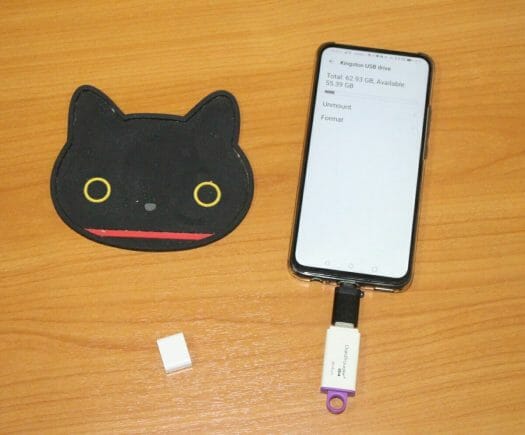 Nope. I can plug in and mount a 64GB USB flash drive without issues… it then dawned on me that I had no thought through that USB Power Delivery requires negotiation, and a USB Type-A connector does not route all necessary signals:

The USB Power Delivery (PD) Specification describes a standard negotiation process for establishing all PD power contracts. Although the USB Type-C standard allows for providing 5 V at up to 15 W of power, following the PD protocol is critical for offering or receiving any voltage higher than 5 V. As a result, any product that requires or  delivers power from 5 to 20 V (15 to 100 W of power) must negotiate according to a specific set of standardized rules.

Notably, the CC1 and CC2 pin won’t be available on a USB 3.0 Type-A port, and that should be the main problem as the charger would not even know a device has been plugged in. One would think a safe 5V could be outputted by default, but no. I still double checked with MINIX and they confirmed this would not work:

That is to be expected, it’s not possible to connect USB-C to USB-A adapters to the USB-C ports on NEO P1.

That’s quite a significant limitation! So you can’t even expect to use it to power SBCs using a C-to-C cable since SBCs will not negotiate anything either. This means that your device is essentially a smartphone charger only.

I’ve used the USB-C port on NEO P2 to power Raspberry Pi 4 and NanoPi R4S boards. So it works, It’s probably because they’ve got some resistor on the board to pull the pin high or low as needed, even though they don’t support USB PD.

CC1 and CC2 are pulled down to the ground in NanoPi R4S schematics. 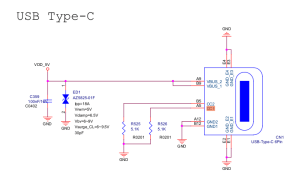 OK thus you’ll need to try to do that inside your adapter.

yeah what’s happening is that the raspi is emulating a USB-C device predating/incompatible with USB-PD. That works since the USB-PD spec IS backwards compatible.
Obviously the adapter is not doing that (being extra dumb) but it could.

for example there are a lot of cheap usb-c to micro-usb adapter for charging legacy phones witha a usb-c pd charger.

But in that case that’s a limitation of the sbc that’s not properly implementing power delivery, not of the charger, isn’t it? I find it quite annoying to have apparently super modern devices with usb-c charging connector that actually don’t support being charged by a USB-C charger, but only with Usb-A-to-C cables. The original Onyx Boox Note e-reader is one such candidate (I don’t know if their newer devices have fixed that). To me this defeats one of the core purposes of having a USB-C connector since you’re still stuck having to carry at least two different types of cables… Read more »

No because the point here was to use an already available A-to-C cable for the board, connected to a C-to-A converter plugged into the PSU. The problem here is rather the C-to-A adapter not pulling the line properly if that’s mandated by the standard (which I don’t know).

yeah the problem is that usb-a has only six pins (besides VCC & GND). and that’s half the violet & half the blue pins on your pinout.
USB-PD is backwards compatible, but only if you pull down CC1 & 2 to GND (like the rpi does). all this does is mark the usb-c device as a power sink. (pull-up marks it as a power sourcE).
so it’s the adapter’s “fault”.

So the lesson is to never buy USB C to USB A adapters. I had considered getting some so that I could use my 12 foot USB cable that has USB C on one end and USB A on the other. I wanted to be able to use that cable on my 25 watt USB C wall charger because the long cable really needs some extra power to charge as quickly as I would like. So you can confirm that this configuration will not work for charging my phone? I’m wondering why they even sell these adapters if they don’t… Read more »

The adapter works fine if people just wan to connect USB Type-A devices to their phone.

Your configuration may or may not work. See George comment as he seems to have an adapter that does the job.

I can charge my Apple Watch using an Apple USB-C to USB-A adapter with my Anker USB- C PD.
So maybe the issue is with the adapter?

In that case, I suppose your adapter pulls CC1 and CC2 signal to the ground. That’s why it can work.

I have some Aliun adapters that were slightly more expensive at ~$2, but include the pull up resistor so I can use them for charging.