MINIX, the Hong Kong company, is well-known for its Android media hubs and Windows 10 mini PC‘s but in recent years they’ve started designing accessories for Windows & Mac computers and laptops.

In the past, we’ve checked out MINIX NEO C Plus USB-C Adapter, an M.2 SSD card pre-loaded Windows 10 Pro for N42C-4 Mini PC, and another USB-C hub with integrated 120 or 240GB SSD. The company has now unveiled four new accessories with three USB-C hubs, including one with a 480GB or 960GB SSD, and one compact 100W USB charger using the latest Gallium Nitride (GaN) technology. 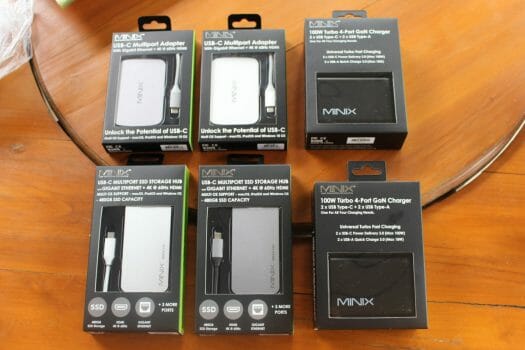 This morning, I received two pairs of USB-C hubs with different colors and two 100W USB chargers. The model I did not get – MINIX NEO Storage Pro – is specifically made for Apple MacBook Air and MacBook Pro with built-in SSD storage, HDMI 2.0 up to 4K @ 60 Hz, Thunderbolt 3 and USB 3.0 ports. But that’s all good since I don’t own any Apple hardware. 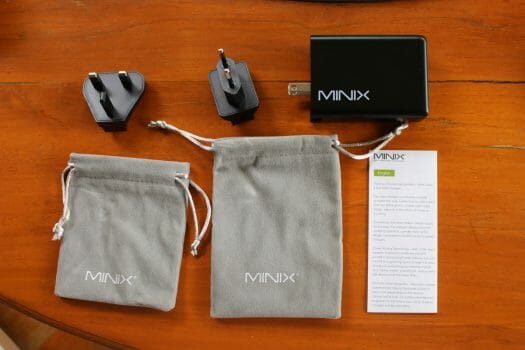 The USB charger comes with US plug with also ships with UK and EU plug adapter, and two pouch bags to transport everything.

I don’t have devices that draw a lot of power from a USB-C port, but a 100W charger would be able to charge a laptop, a few smartphones, and tablets comfortably. It should also be usable as a power supply for single board computers. In the meantime, I’ll use it as a USB extension to my power extension, as with phones, smartwatches, bicycle lights, and mosquito traps, the four USB ports get used pretty quickly.

Granted that’s over the top to use such a beefy charger with a smartwatch, but I’m sure that eventually, I’ll get products that can make use of the extra power.

If you’re interested MINIX NEO P2 charger sells for $59.99 on Aliexpress and Amazon. 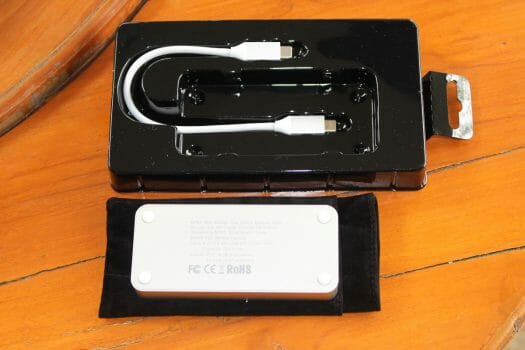 The multiport USB-C comes with a black pouch bag and a separate male to male USB-C cable. 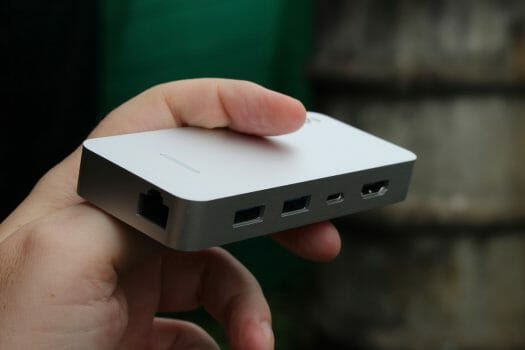 The company says the USB Hub supports macOS, iPadOS and Windows 10 OS. So I tried in Windows 10 in an AMD Ryzen Embedded SBC I have lying around… 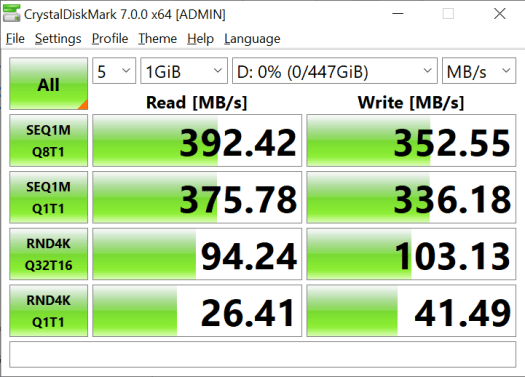 Close enough to 400MB/s. MINIX did not mention Linux support, so since I’m dual-booting Windows and Ubuntu on the SBC, I switched to Ubuntu 20.04.1 and could see the drive mounted with exFAT file system:

So I ran iozone to check the performance:

Around 379MB/s for sequential read speeds, but relatively slower 240+MB/s sequential write speeds. The random read/write numbers look a bit high though. Anyway, sequential performance is a bit slower than in Windows. Formatting the drive to EXT-4 might improve write performance. The USB Ethernet port was detected in Ubuntu as well. The board’s USB-C port does not support video output, so I did not try HDMI output.

The last accessory I received from the company is a more traditional multiport USB-C adapter with a built-in USB-C cable to connect to the host, two USB 3.0 ports, Micro SD and SD card sockets, Gigabit Ethernet, HDMI 2.0 up to 4K @ 60 Hz, and another USB-C port to connect an external USB-C power supply if more power is needed such as when connecting a USB hard drive.

MINIX NEO C-G USB-C is sold for $59.99 on Aliexpress including worldwide shipping.

Based on the specs, the MINIX NEO P2 appears to be a clone or rebrand of the HyperJuice GaN 100W charger. I don’t see any mention of PPS support so I assume that like the HyperJuice it’s not supported. The only difference seems to be some minor case design changes. One plus is that it’s one of (if not the only) 100W direct plug in PD chargers available with AU/NZ plugs.