We previously wrote about Ebyte E180-ZG120B-TB an inexpensive ($9.90) Zigbee 3.0 evaluation board based on Silabs EFR32MG1B Arm Cortex-M4 wireless MCU and the equally cheap ($7.78) WT32-ETH01 ESP32 Ethernet board. What do they have in common? Absolutely nothing!

But GitHub user tube0013 decided to connect both boards over UART to create a Zigbee to Ethernet DIY coordinator/bridge running open-source firmware. 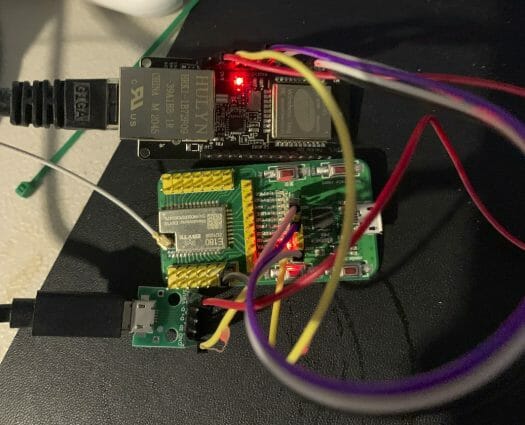 EZSP-Firmware is used for the Ebyte Zigbee 3.0 board, and ESPHome open-source home automation firmware for the ESP32 board. You’ll also need serial to IP code and ESPHome config. Note that flashing firmware to the Ebyte requires a programmer, and the developer used a J-link EDU Mini together with Silicon Labs’ Simplicity Commander. 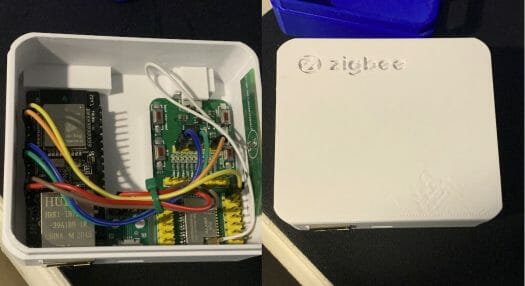 As mentioned above, a 3D printed case has also been designed, so everything is neatly packed together. The total cost assembled should be around $20.

The Zigbee to Ethernet bridge can then be added Home Assistant using socket://IP:6638. You can also change the port in the serial to IP source code. 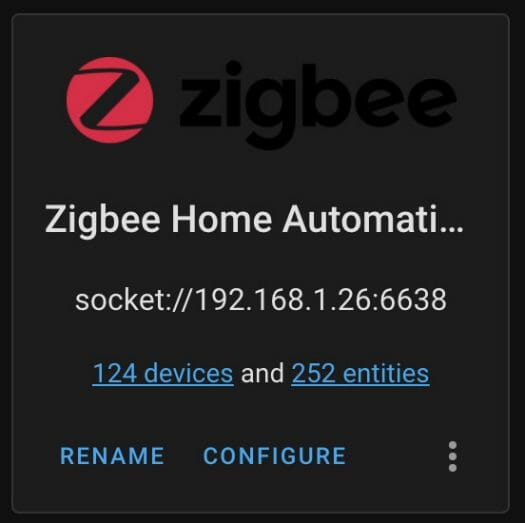 This type of solution can be more stable and reliable than WiFi to Zigbee bridges as both wireless protocols operate in the same 2.4GHz frequency and may interfere with each other. We’ve also been told most serial protocol; connections are not resilient enough to handle serial packet loss or loss of sync. The project could easily be adapted to other serial wireless modules as well.

The discussion also mentioned SM-011, a tiny EFR32MG21 Zigbee 3.0 module that could be integrated into a smaller gateway, or make the base for a compact, single board based on ESP32 for Ethernet and EFR32MG21 for Zigbee.

This is good but it isn’t an autonomous gateway : all the intelligence is in ZHA integration of Home Assistant.
There is an another project where the software interpreter of the zigbee chip is embedded in the ESP32 so it make a real autonomous gateway :
SLS Gateway.

So without home assistant, without ZHA, without zigbee2mqtt and without phoscon… you can transfert zigbee message to mqtt, a web api, execute a script…

The pairing with this SLS Gateway is the zigbee pairing experience that you can have (this is often a very frustrating step).

Also I forget to say that the web interface embedded in the ESP32 is awesome, it include the zigbee map, the pairing interface, graphics representation of you associated devices, scripting interface, easy backup/restore options…

A good place to start to discuss about SLS Gateway :
https://discord.gg/Ym9JZqfp7c

Zigbee2Tasmota (Z2T) including Tasmota ZBBridge project is also a fully integrated Zigbee gateway and MQTT bridge but it only supports ESP8266 yet and I do not know if they are working on ESP32 support?

SLS Gateway is not open source as far as I can tell?

Z2T is the worst zigbee experience that I ever try but yes this is open source.
SLS gateway has open source hardware but not the firmware. Conbee is not open source too.

Why do you want open source ? You often modify the tasmota firmware by your own or it just because you heard that something open source is better ? ? Joking but make a try on SLS , I tried many zigbee gateway and they have a lot of advantages compared to the others.

Ahah -3 points because I’ve made a critic for tasmota fanboys ?

Lol something like this we did ages ago for our thesis: CC2420, ATMEGA128, ARM7tdmi w/ UC Linux, Linksys WiFi AP, if my memory serves me right… Plus remote administrable sensor nodes, meant to last for years on 2 AA cells. Never materialised beyond our thesis AFAIK, seems we were more than a decade too early 😉 Oh almost forgot to mention, all sourced locally in Europe, as there was no Aliexpress, BG etc. sometimes it was hard getting things in from i.e. Germany, PCBs were made in the lab, no Arduino either, no Adafruit break-out-boards, just components, over priced eval… Read more »

Its nice and cool you did it, with so many feature & without “over priced eval kits”. I just want to say that the value for people like me is in the fact I can recreate what this guy has done thanks to his effort to document and share his work.

Other than “decade too early” please consider uploading your work on github, so the next person can use it, as nothing “materlises” on its own and not everyone has time and/or expertise to do everything.

I would love to but unfortunately my lab HDD is toast (Seagate) and honestly compared to the above solution I guess it’s so much outdated… Sorry all just excuses, but I have no more access to the data just nostalgia 🙁