We recently wrote about Devterm, a modular, retro-looking portable computer that looks like a typewriter with an extra-wide display, and takes Raspberry Pi CM3-series modules, or other compatible modules made by Clockwork based on Rockchip RK3399 or Allwinner H6.

If you’re into this kind of device, but would like to use your own Raspberry Pi,  another SBC,  an Intel NUC motherboard, a Nano/Pico-ITX board, or even your smartphone, Ready! Model 100 single board computer expansion system may be worth looking into. 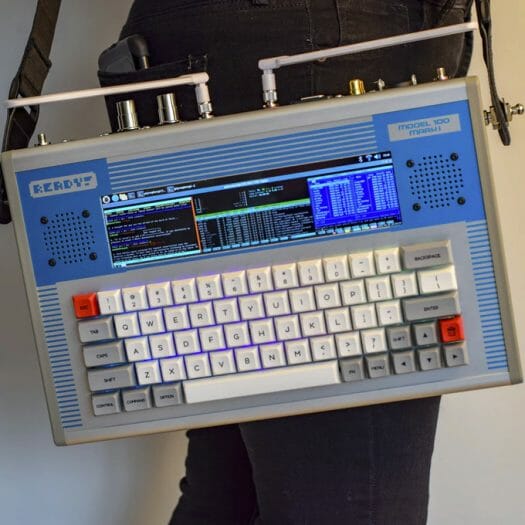 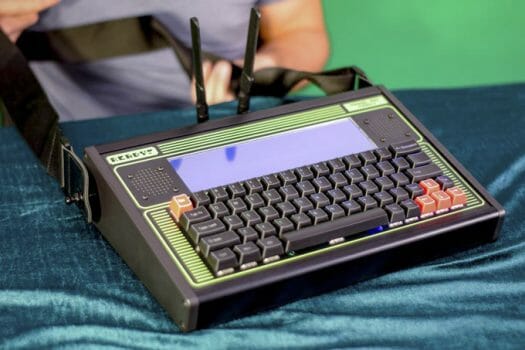 The Ready! Model 100 expansion system is said to be OS-agnostic, but it’s quite possible it does not work fully with all boards because of the unusual 1920×480 HDMI resolution that also happens to be found in Lisperati1000 Lisp portable programming workstation which we covered earlier this week. The company will also offer the open-source READY! OS based on Debian Linux, and said the device is ideal for technicians, hackers, systems admin, heavy typers, music makers, and radio operators.

Last December, Tom’s Hardware reported the Ready! Model 100 “Founders Edition” would have a quad-core x86 SBC fitted with 16GB RAM and a 1TB SSD for $899, while the bare kit without board was expected to sell for $400. But with the modular computer system now launched on Kickstarter, it turns out pricing is not quite as high as initially thought, as the READY! MODEL 100 Pro DIY Kit goes for around $236 US. But it takes the meaning of bare to a new level, as not only it does not include the single board computer, but you’d have to source or make your own switches and caps, port couplers, and power system. If you’d like an easier kit to assemble, the $353 US “NEO Kit” without SBC is the way to go as apart from the single board computer everything is there including keycaps and the power system. If instead, you’d just like a system that works out of the box the “NEO” DIY KIT – READY! MODEL 100 adds a Raspberry Pi 4 with 2GB RAM for about $392 US. Finally, a complete AMD Ryzen system with 16GB RAM, 512GB SSD is also offered for $1,099. Further information can be found on the official website.

[Updated. This article was initially published on December 10, 2020, and updated on February 10, 2021 with the launch on Kickstarter]

It looks like an expensive “cyberdeck” for peoples lacking DIY skills …

All projects need a case and this looks like a good one.

Or you could just buy a laptop. A Pinebook Pro is $199

I’m getting visions of those cool looking antennas getting ripped of 5 minutes after you walk around outside with these things to show off your geek.