Lilygo TTGO T-Watch-2020 is a thin, ESP32 smartwatch programmable with Arduino that was introduced last year. The WiFi and Bluetooth-connected watch is equipped with a 1.54-inch LCD capacitive touch screen, a Class-D amplifier, buzzer, accelerometer, RTC, and a battery.

The watch is one of the top-selling devices on Lilygo’s Aliexpress store, and they must have had requirements for voice control, so the company has now launched TTGO T-Watch-2020 V3 based on the same design but adding a PDM microphone. 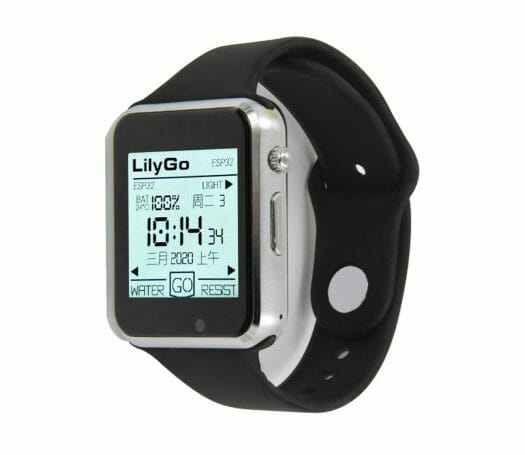 As far as I can TTGO T-Watch-2020 V3 specifications are the same as last year’s model, except for the microphone: 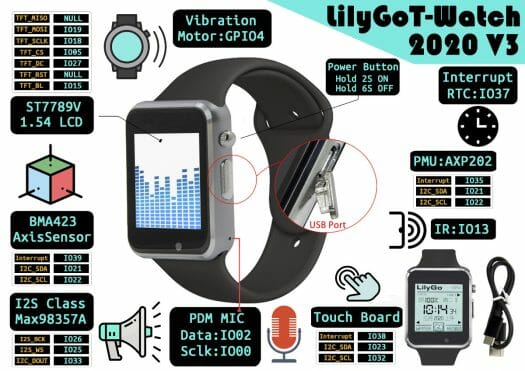 The watch can be used as an IoT terminal controller, a wearable device, for STEM education, DIY project, and thanks to the addition of the microphone, voice interaction is now possible.

The watch ships with a 30cm Micro USB cable for charging and programming. Documentation and software support should have improved since last year and you’ll find both respectively on Readthedocs and Github (Arduino). It’s also possible to program the watch with MicroPython or the ESP-IDF, but there may be less documentation, and most people should probably stick to Arduino programming on this watch.

An Arduino sketch for using the Microphone can be found here. It will show dynamic volume lines on the display.

How long will the watch run between charges and what kind of water resistance does it have?

ESP32 watches typically last one or two days on a charge.

I bought one of the early models, but it arrived with a broken glass on the touch display, which would have limited my usage. Nevertheless I’ve run a few tests on it and noticed that you should not expect much more than one day. That’s a very rough estimate because from time to time I would pass close to it and try to wake it up just out of curiosity, I didn’t make precise measurements. But it definitely did not last a full week-end.