Pine64 PinePhone is a popular Linux smartphone among the developers and Linux enthusiasts’ communities and some of the most popular Linux operating systems support by the phone include KDE Plasma Mobile, PostMarket OS, Manjaro, and UBports for an Ubuntu Touch like interface.

But soon, you’ll be able to use your PinePhone like a portable Linux computer, a 5.95-inch mini laptop of sorts, that’s similar to the 2-in-1 Cosmo Communicator device, but at a much lower price, albeit with lower performance, thanks to PinePhone Keyboard accessory. 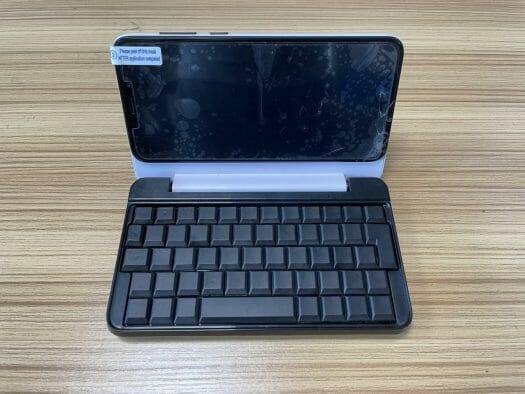 The PinePhone Keyboard is not quite ready yet, but Lukasz Erecinski  (aka Luke) has shared the progress of the latest version of the prototype, and almost looks like a finished product, albeit we’re told another revision will be made as the tolerances on the keycaps are not suitable.

Here are some of the main features we can expect from the keyboard:

The battery is the PinePhone is around 3,000 mAh, so you’ll triple the battery capacity to 9,000 mAh with the keyboard. Luke says this will allow the phone to run in standby mode for nearly a week with the modem active, and over two weeks without the modem. When I tried PinePhone with PostMarketOS in January, the battery would deplete fairly fast, but it could have been due to immature software. I suspect the keyboard should allow the PinePhone to last around 2 days on a charge for typical usage. 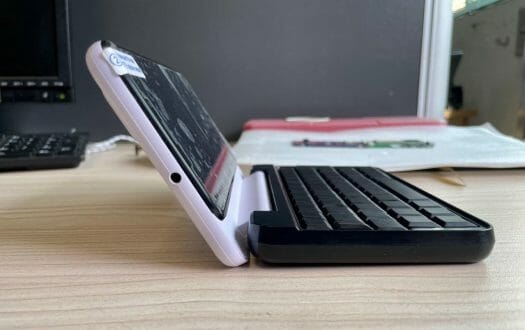 As noted by Linuxsmartphones, the phone fits into the top section of the case with cut-outs for the USB port, headphone jack, camera, and speaker. There’s also a USB port in the case itself for charging the battery. The USB-C port on the keyboard can only be used to charge the batteries, and an added benefit is that it frees up the USB-C port on the PinePhone so, for instance, you could connect a USB-C mouse to the PinePhone.

The default QWERTY keyboard layout, as shown above, will lack a CAPSLOCK key, but the microcontroller on the keyboard will be programmable through the I2C pogo pins at the back of PinePhone which will be connected to the keyboard as part of the design. 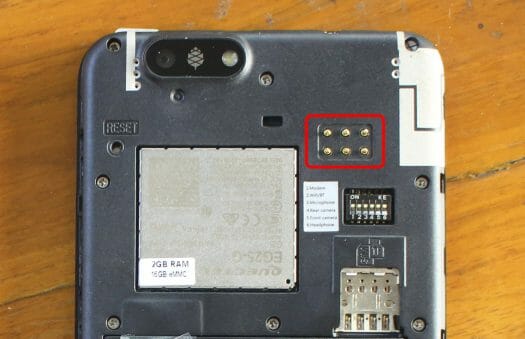 The photos above don’t really show how thick the system is, and the short video below makes the PinePhone Keyboard feel more like a power bank with a keyboard as it looks fairly thick.

Luke could not provide any ETA with regards to manufacturing or availability in the Pine64, but we should expect more details in the upcoming Pine64 May 2021 update.

Any review that mentions the lack of explicit key, if only neutrally (as opposed to sadly) is a good review 🙂