The low-cost Rock Pi 4 SBC was unveiled in 2018 with a Rockchip RK3399 processor, up to 4GB RAM, and Raspberry Pi 3 form factor. Rock Pi 4 Plus builds on the relatively popular single board computer with an upgrade to Rockchip OP1 processor, which is a higher performance RK3399 SoC typically used in Chromebooks and ASUS Tinker Board 2.

The new board also adds 16 to 128 GB eMMC flash, instead of relying on an optional eMMC module, and will come pre-loaded with Twister OS Armbian lightweight desktop OS based upon Armbian Focal 20.04.1 LTS (aarch64) for Rockchip RK3399-based SBCs. 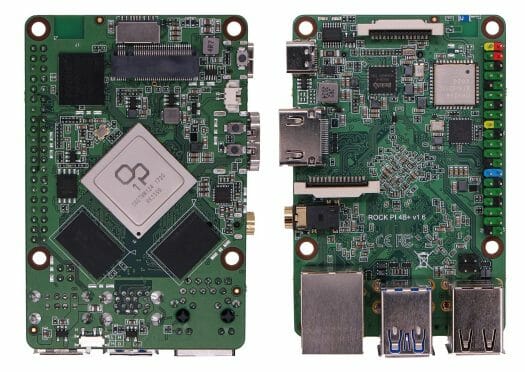 Four variants of Rock Pi 4 Plus share most of the same specifications: 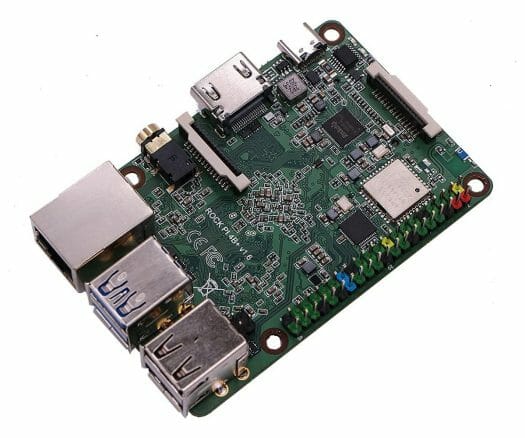 There’s some conflicting information about the specs, as the newsletters’ announcement lists four models, two model B as above, and two model A without WiFi:

But for example, Aliexpress lists four model B boards with up to 128GB eMMC flash, albeit the largest capacity is not available (yet). 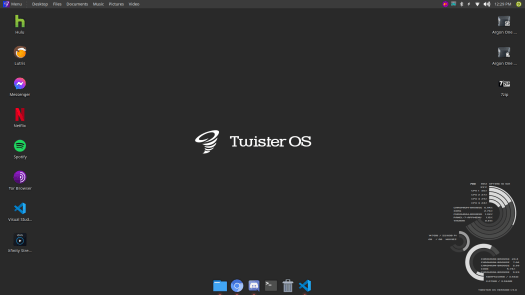 The original Rock Pi 4 would not ship with an operating system since internal storage did not include, but since Rock Pi 4 Plus does include at least 16GB of eMMC storage, Radxa decided to flash Twister OS Armbian to the board maintained by Pi Labs.

Twister OS Armbian version of Twister OS specific to Rockchip RK3399/OP1 board such as Rock Pi 4B, Rock Pi 4C, and RockPro64 boards. It should be noted that 4 GB of RAM is recommended, so the versions of the board with 2GB RAM may not work in an optimal manner. Twister OS Armbian relies on XFCE desktop, a recent Linux kernel, and supports hardware video decoding, as well as 2D/3D GPU acceleration. If you prefer another Linux distribution or Android, you can also download and install an alternative image found in the Wiki

Rock Pi 4 Plus (B4E32) with 4GB RAM, 32GB eMMC flash and WiFi/Bluetooth can be purchased for around $100 on Amazon or Aliexpress.

Very cool to see Twister OS getting some love.

If you can’t wait for RK3588 to exist and get supported, this seems like a good option.

“Raspberry Pi 4 Plus (B4E32) with 4GB RAM, 32GB eMMC flash and WiFi/Bluetooth can be purchased for around $100 on Amazon or Aliexpress.”

That ain’t it, chief. xD

Twister OS also gets in a conflict with people that creates value in open source. They provide images in binary form only. Without disclosing sources you are violating GPL licence or tl;dr; provide pirated software. All open source vendors should know that, but some doesn’t care probably because they don’t make much value in software support, contrary, they use open source to support hardware sales.

In the end we ended up with a raspberry pi 4 plus:

> Raspberry Pi 4 Plus (B4E32) with 4GB RAM, 32GB eMMC flash and WiFi/Bluetooth can be purchased for around $100 on Amazon or Aliexpress.

Why not use Chrome OS on this SBC, to bad a experience or not?

Can chromeos do something more/better than a “proper” linux?

Oh really? I thought that was android’s domain 😀 sorry having absolutely no clue when it comes to chromeos

There is libhybris in Linux. Jing OS say they will add support for android application in there GNU/Linux system (Ubuntu derivated), 1.0 release next month (in 2021 June).

I wish Radxa, HardKernel, etc would make SBC with reasonable size, have good default casing that we can put hdd/ssd and/or m.2. Something like intel nuc, maybe.

H2 case is not that good. Helios64 is superb. But the price is superb too. 🙂

Clearly you haven’t looked at what HK offers if you even post that question. They’ve been making such devices for years.

Buy 1 intel nuc. Choose i3 at minimum. You’ll know what I mean.

realized that the mighty nanopi neo4 and M4 is discontinued

Is this another sbc with power only USB-c? I would like to be able to use sbc with USB-c hub with power pass-trough 🙁

Yeah, I was there when you posted it. At the time it looked like it’s first sign of what will be standard soon but it never really materialized.

I don’t know if anyone from Radxa will see this, but your Taiwanese distributor doesn’t answer email inquiries. Seems there is no way to purchase your product from Taiwan (maybe this is intentional?)

errr, to clarify. This is from the Radxa website and the “ALLNET Taiwan” distributor’s contact details. Seems you can order through amazon – with a wonderful $25.30 shipping