Let’s finish giveaway week 2019 on a high with FriendlyELEC NanoPi M4V2 single board computer, and its metal case kit.

The board features a Rockchip RK3399 processor with 4GB LPDDR4 RAM, and the metal case kit allows the addition of an NVMe M.2 SSD as well. 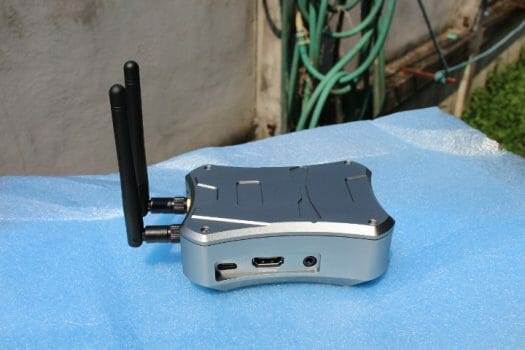 I tested the mini PC with FriendlyCore Desktop based on Ubuntu 18.04, since at the time, Armbian was still not working with the updated board equipped with LPDDR4 memory, and Android requires an eMMC flash module which was not part of the kits I received.

NanoPi M4V2 performed fairly well in the case, but the fan is quite noisy, and somehow the RAM bandwidth was almost half of the one in the earlier NanoPi M4 board with DDR3 memory, which is the opposite one would expect. Probably related to some software tweaks as explained in the comments section of the review.

I received two kits, so I’ll keep one for me in case I have to do further testing latter, and will select one winner for the two unopened boxes on the left that contains a full kit.

Good luck! That was a fun week.

The most popular item for this giveaway week by far with 282 entries. Let’s Mr. Random do its thing, and …. #115 is the winner of NanoPi M4V2 Kit.
Congratulations Thiago Tavares! I’ll contact you by email.

Hey, I do would love this!

nice and power full board but poor resources I think 😉

I’m in for the draw. Thanks!

This one is nice!

Count me in. This is good stuff!

It looks so cool.

Could really use this, new toy

Could be fun to play with.

Roll the Dice, and let Luck flow upon me :))

RK3399 is great. Would like to get one. Will cross the fingers.

Did you know that an average person normally blinks 20 times a minute, but when using a computer he/she blinks only 7 times a minute.

Count me in please. Would love to have one!?

Count me in please !

how nice if i get it

Would be perfect for the holidays!

Praying to the random.org God’s!

Would love to have this for smarthome hub

Hi, have a nice day!

So far so good

Count me in, good luck everyone.

I am also in

I really hope I get chosen.

Thanks for the draw!

This one is really a beast embedded device. The metal casing ??

Another year going to end. Sing something that includes sbc..

Oh, that’s nice! Lovely time if I get one…

Amazing,I was considering that sbc for a project.

I’ve wanted to get an RK3399 to test. Thanks for offering.

I hope I win this one!

Great Place. Thanks for the giveaway.

Here’s hoping I get this, our club could use a shared computer 😀

Because having enough SBCs isn’t really a thing, I’m in.

This time, I’m trying my luck!

So nice board, I’d be happy to win it!

I would love to have one

Would be happy to win this prize 😉

It would be nice to have one of these! it looks much neater with the case !!

Yes please! That is the best.

Would be nice to have it 🙂

I could replace my 12 year old desktop with this.

I wish everyone good luck, said no one ever.

I’m NOT in. I prefer to save my sweepstakes slot for the Bentley Flying Spur give away.

Awesome, I would love win this game

Greetings from Latvia,
Count me in for the draw!

This is strong SBC. I love it.

Thank you for the giveaway!

This is pretty awesome of you!

Count me in , Thanks

You saved the best for last

Thank you for be so gentle.

I want to win because I want to start my own homelab. Thank you very much!

Hey there!
I wouldn’t mind getting this. ?
Best of luck to all of you !
Thanks for this giveaway. ?

I’ve been wanting to check one of these out for a while. Count me in 🙂

Count me in, thank you!

Dang sexy device, I want one

Woud be fun to win

Please papi give it to me!!

Good luck for all! 🙂

Ye my raspberry 2 could use some upgrades

Nice evening, I am in play…

I would love to win this!

I would like to be in the draw too !
check out the buildroot system for the NanoPi M4 : https://github.com/flatmax/NanoPi.Neo4.buildroot.external

Can I get it still?

I would love this product to be hooked upto an extra display and act as a plex server in my home. Hope i will win..

Thank you for letting me in.

Hi, i really enjoy CNXSoftware and I want to win this NanoPi

Wow! What a treasure for anyone winning!

With 4G of memory, this looks good to use for compiling and daily using

Count me in. I love working with SBC’s.

I would love to install openmediavault on this NanoPi M4v2. Wish me luck : )

Ah, another doet of nanopi. Interesting!

i should be in

I would love to have one 🙂

i have a dream

Good review, I am in!

I will take my chance if it’s still possible, who knows

Count me , please too

I still have no board with Rockchip RK3399, I would like to have one…

Yes, please! I’ve been having my eye on one for a long time:)

That is a pretty cool board.

Good afternoon, I’m in . I really hope to win!

nice board for various projects

Would be a great price. Thank you.

Please count me in this think is super nice

I would love to recive one

Ooooo! Count me in!

I do would love this!

I can think of a few really good uses for this

As someone that has one of these boards, there is currently no decent support. FirendlyElec’s desktop based images use vmware drivers for video, i.e. no hardware support, so don’t expect good quality video, just yet. If you can live with this then more power to you. There are also not currently any distro’s of Linux that work on this board other than the FE images. Hopefully Armbian will be ready soon…

I currently have two of these boards and am looking forward to a working Armbian build!

Please, count me in 🙂