The launch of Raspberry Pi 4 SBC has generated lots of interest, especially with the extra performance and low $35 price tag that has made most alternatives suddenly less interesting. However, Raspberry Pi 4 benchmarks show it’s not quite the fastest board around, and for example, Rockchip RK3399 platforms are still quite faster, sometimes as much as twice as fast.

They do cost much more though, often more than twice, and so far one of the cheapest RK3399 boards was NanoPi M4 going for $65. FriendlyELEC has now decided, certainly in response to Raspberry Pi 4 offering, to lower the price to $50 for the 2GB RAM version which compares to $45 with Raspberry Pi 4 2GB, as well as $75 for the 4GB RAM version (was $95). 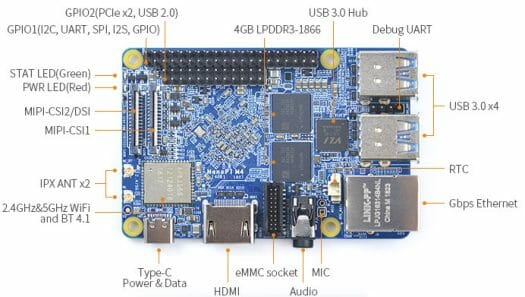 The specifications are so similar to Raspberry Pi 4 that is almost feel the latter copied NanoPi M4 :). 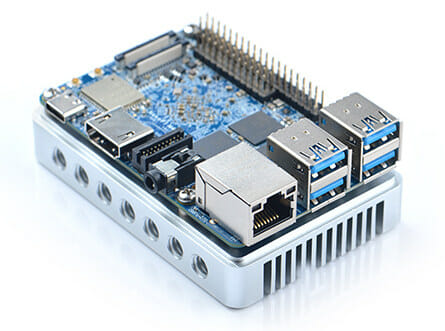 Beside the faster processor, some of the advantages of NanoPi M4 are support for 4K H.264 and VP9 hardware video decoding, four USB 3.0 ports instead of just two, an eMMC module socket for improved I/O performance and reliability, an extra 24-pin I/O header with PCIe and USB interfaces, a wider temperature range, and proper passive cooling solutions as shown above. It does lack however support for dual HDMI display, nor HDR video playback and Bluetooth is limited to version 4.1.

Software support for RK3399 platforms is now quite mature, and you’ll find documentation and development resources such as Android 8.1 and Ubuntu 18.04 images in the Wiki. Note that Android does not work from microSD card, so you’d have to buy an eMMC flash module as well. This brings another advantage of NanoPi M4: Android support. The Raspberry Pi foundation does not provide an Android image, and community Android images for RPi are often far from being optimized.

NanoPi M4 also has some interesting accessories not available for Raspberry Pi 4 such as a 4x SATA HAT that allows you to create a compact NAS with up to 4 drives.

That makes me wonder, if they squeeze the prices that much, then what do they make for each board now? It seems like they sell near their BOM cost. And probably these are already stock devices, which means probably higher BOM cost compared to new builds.

Its possible and it’s being done so by these small sbc manufacturers. There are some other sources of revenue (like chinese goverment grants) that make that possible.

there is also another thing to take into account : the evolution of DRAM chips prices
for example : 1GB of DDR4 2400 now cost around 3.2$ and one year ago it was close to 10$ (see dramexchange website)

And here you can mount HATs due to the SoC being on the appropriate side of the PCB. The RPi 4 is one big overheating mess. No idea how they think it would be possible to add any accessory on the RPi 4 other than their PoE HAT which includes a fan.

By the time you know : they don’t expect that anything is possible, they just expect to sell it. Only specs matter in the RPi world. With this said, I ordered one just to see how close to usable it really is. We’ll see.

Just curious, do you have graphics enabled ? It seems strange to me that a 28nm CPU running under only 0.85V is this hot doing nothing! The rk3399 is etched at 28nm as well, runs under comparable voltage and is not hot like this while idle.

I attached the one SSD that is powered externally back to the Pi. Consumption increases by 700mW (measured at the wall) but temps remained more or less the same at around 60°C.

I then added the 2nd SSD that is supposed to be powered by the Pi itself. Consumption increases by an additional 1.3W and temperatures are slowly rising again.

I guess that it’s the PMIC nearby SoC and SD card that’s the additional heat source now, see the thermal image here: https://miro.medium.com/max/1400/1*KedwLPE9eXoeuwdciZpE0Q.png

Two close hotspots on the same board with cold ones around definitely indicates a poor thermal design. It seems that just swapping the SoC and the RAM could have significantly improved things.

Mine was like higher than that. 62C with IR thermometer at idle. Did not check the temp with command line at idle. But I will test again with a heatsink to see how to performs.

The NanoPI M4 is an awesome machine, very well cooled (mine never throttles), extensible and quite powerful. In my opinion it’s one of the best designs you can find in this price range at the moment for a wide range of use cases. The only *really* annoying thing is that it’s still missing an enclosure. You can never recommend it to anyone who just needs a small versatile computer to display stuff on a screen or to perform some basic automation, and that’s really sad. Due to this, only developers like us or engineers planing on integrating it in complete… Read more »

Not that I’m short of RK3399, but I’m about to order an M4 on principle, just to show those guys support for not being the thermodynamic ignoramuses the Foundation are. I’m sure I’ll find some application of that little bugger.

What companies are already best known for eltronics recycling?

Just two case designs on thingiverse and one enclosed with fan claims 56°c for 100% 6 core load.

Indeed, thanks for pointing this. With this said, an aluminum case serving as a heat spreader at the same time would really be awesome.

You should checkout ROCK Pi 4.

At 75$ plus 11$+ shipping from only one unknown vendor? Plus then taxes 6.60 and postal fees 18 for import service. Sorry no good deal at all.

What about NanoPi NEO4 ? Are they not going to lower the price for that too?

The Neo4 is already extremely inexpensive for an RK3399, I hope they still manage to make a bit of revenue out of it. They could as well decide to kill the neo4 and only keep the M4. The neo4 being very small does have quite some benefits though.

I wonder if others will follow suit. Orange Pi, i’m looking at you.

Where can I buy it for this price?