Qualcomm’s Snapdragon 7c Gen 2 SoC for entry-level laptops and Chromebooks follows the steps of the Snapdragon 7c processor with a slightly higher frequency for the Kryo 468 cores, leading to a 6% performance improvements.

As we’ll see below, most of the specifications are exactly the same, except the built-in Snapdragon X15 LTE modem is now listed as supporting LTE Cat 14 up to 600 Mbps, instead of LTE Cat 15 up to 800 Mbps, and UFS downgraded to UFS 2.1 from UFS 3.0. 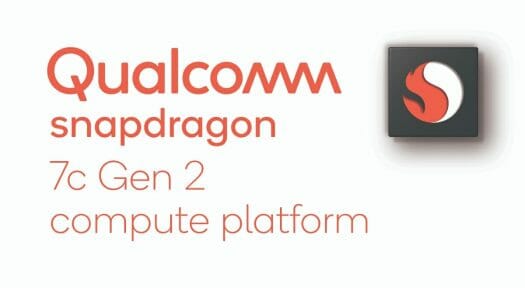 Snapdragon 7c Gen 2 supports both Windows 10 & ChromeOS. It feels more like a relaunch with potentially some cost-cutting measures rather an upgrade to Snapdragon 7c.

Qualcomm still says the Gen 2 compute platforms deliver up to 10% higher system performance than competitive platforms with up to 19+ hours of continuous use on a single charge is up to 2x the battery life of typical entry-tier laptops, compared to Intel-based laptops.

The first Windows 10 Arm laptops and Chromebooks are expected later this summer. More details may be found on the product page.

I see 4K video decoding, but I dont see 4K HDMI. That means that the laptop will always need upscaling when connected to a 4K TV/4K monitor.
RK3399 and RPi4 already support 4K HDMI.

That just tells you the specs were coppied over from a phone SoC where the display will not be 4K, but people want 4K cameras. The 4K playback is just so that you can review videos you have captured.

Don’t think of this in the context of desktops, but rather as a rebadged phone SoC.

One problem of the Windows ARM laptops was price, wan’t it? About 800 USD for a laptop, with as pro’s “longer battery” and “always online”. And one big elephant in the room.
Anwyay: has the price problem been solved? An ARM laptop for 350 USD would be more interesting. Otherwise I’ll stick to my i3.

I’m confused as well, unless it can help cut costs somehow. Another possibility is inaccuracies in the specs either for Gen2 or for the first Snapdragon 7c.