The Cortex Microcontroller Software Interface Standard (CMSIS) packs have been around for years providing a vendor-independent hardware abstraction layer for microcontrollers, mostly Cortex-M based, but others too, and currently support close to 9000 different microcontrollers.

I always assumed CMSIS was open-source as the source code is available in Github under an Apache 2.0 license. But apparently, not all components are, and Arm has now announced the Open-CMSIS-Pack project that will move part of CMSIS into the open project in collaboration with the Linaro IoT and Embedded Group.

Linaro, Arm, and other partners like STMicro and NXP will initially focus their work on command-line tools and CMake workflows, with the ultimate goal of making the CMSIS-Pack technology into a true open standard for MCU software component packaging.

Right now, everything feels a bit abstract, but eventually, more information will surface on the project’s website.

Everything is moving to the cloud, and even programming tools like integrated development environments (IDEs) are moving to the web browser as we’ve seen with Arduino Create which allows programming an Arduino board without having to install the Arduino IDE on your computer. 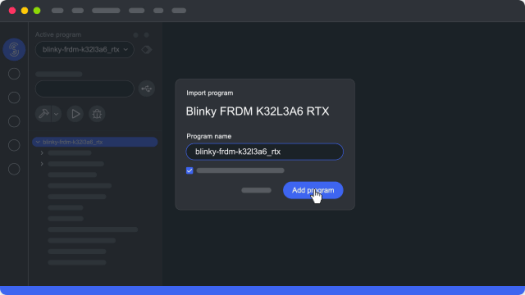 Arm is now doing something similar with Keil Studio Cloud that provides a cloud-hosted platform with “Git integration and CI workflows for rapid IoT device development”. Keil has been providing professional development tools for the embedded market for years before being acquired by Arm in 2005.

The Keil Studio Cloud is still at the beta stage with support for a limited set of supported boards and features, including NXP FRDM-K32L3A6, LPCXpresso55S69, and MIMXRT1064-EVK boards. You can try the beta on Arm Keil website.

Several software releases are planned over time with the goal of providing a web-based IDE with the following key features:

Some more feedback from Arm, when I asked the reasons for Open-CMSIS-Pack vs CMSIS since both are open-source: CMSIS, which includes CMSIS-Pack technology is an open source standard predominantly maintained and developed on GitHub by Arm. However, there is a demand in the industry to extend the CMSIS-Pack technology further, to support internal deployment processes and enable new tool innovations. There is also a requirement to classify existing API interfaces so that CMSIS-Pack can be effective for the entire software ecosystem. Moving CMSIS-Pack to an open project, which will be managed by Arm and partners is the best way to accelerate adoption while keeping consistency across the various implementations. The project will… Read more »