Radxa Zero SBC follows Raspberry Pi Zero W form factor, but thanks to an Amlogic S905Y2 quad-core Cortex-A53 processor clocked at up to 2.0 GHz offers much higher performance, which Radxa says corresponds to about 70% of Raspberry Pi 4 CPU performance.

The tiny Arm Linux board comes with up to 4GB RAM, 16GB eMMC flash, and either AP6212 or AP6256 wireless module. plus all interfaces from Raspberry Pi Zero W, but with a twist as the mini HDMI port is replaced by a micro HDMI port, and USB-C ports are used instead of micro USB ports. 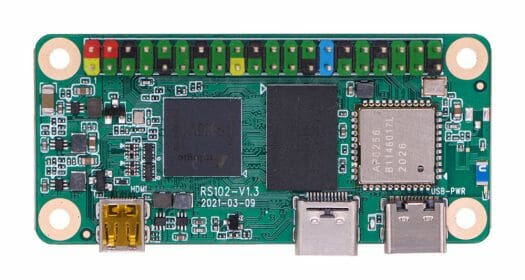 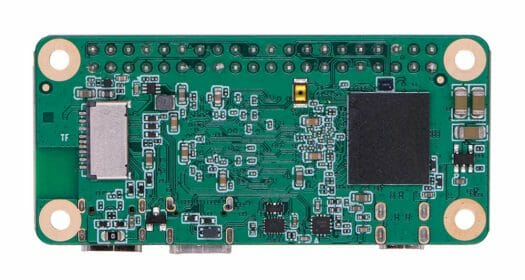 The only missing feature is the MIPI CSI camera, but for everything else, Radxa Zero offers much better specifications depending on the selected memory, storage, and wireless module compared to Raspberry Pi Zero W.

The board should run Android and works is being done on Armbian/Twister OS, and other operating systems. From a software perspective, it’s a “G12A” platform, a reference you’ll find in the Linux kernel for example, and compatible with Amlogic S905X2.

Four variants of Radxa Zero board will be offered:

Radxa has already manufactured 100 samples, some of which will be sent for free to developers to help with porting low-level software to the board.  That also means the board is not quite ready for the “general public” just yet, and we may have to wait for a few more months.

As a side note, It’s not the first quad-core providing an alternative to Raspberry Pi Zero W, as Banana Pi M2 Zero was introduced in 2017 with an Allwinner H2+ quad-core Cortex-A7 processor up to 1.0 GHz, but again Radxa Zero will be much more powerful here.

If only the $15 one had somewhere to put a SPI NOR or NAND.

Are you sure about the powering from micro USB? Isn’t it from USB-C port?
On the first picture, I think we can see the two USB-C port on the right side and on the left side it is the micro HDMI port.

Yes, it’s via one of the USB-C ports. I’ve changed it.

EDIT: nvm, I think @jeanrhum is right and it’s USB-C power (according the text on the board itself)

I remember the S905Y2 has some lower power mode. Would this be appropriate to run off a battery?

PS: I mentioned this in another post, but your Taiwanese distributor doesn’t respond to emails (if Radxa sees this..)

How does the GPU compare to Pi3/Pi4?

Anything is better than a videocore

how does this Mali GPU compare to the UHD 600 in the Celeron reviewed in the previous story?

(If the rumour of buying Si-Five is true, intel GPUs paired with risc-v might compete directly with Amlogic.)

No low-end A53 or A72 chipset can compete with a current Celeron. The UHD600 will easily crush the Mali.

Unless I’m mistaken, the board is using a ceramic antenna (the blue component on the right of the first photo).

The board has the T version, which use u.FL connector for external antenna. The default version is the on board antenna.

Do you think they might build a bigger format version with S922X and MIPI DSI ?

I think you are not familiar with Amlogic naming(it doesn’t make sense to me but):

D – with display(MiPi)
X – no display
Y – strip further on X, no ethernet

What you want is A311D, which is pin compatible with S922x with MiPi DSI. The questions is, would you like to pay 100$ for that?

Would cooling be an issue as well?

Thank you for replying. Yes I was just going off the block diagrams of the S922X that list a MIPI DSI output.
So that just leaves the Khadas Vim 3 or V3L ( S905D3 ) .

Looks nice, the thing i realy miss on the pi zero is emmc.

Guess what? It’s possible. The S905Y2 USB3 is actually muxed with PCIe, so we can make a hat with 2.5G ethernet.

Sorry to let you down, when I checked the details, I was wrong, we still requires the PCIe clock to route to the USB C, which is not in fact. If we could do that, that would somehow be thunderbolt/USB4.

Could you clarify a bit. I assume a hat will run through the 40 pin GPIO pins. And these pins can be configured to route USB?

The USB3 and PCIe on S906Y2 shares the same pins, software configure to set function. The 40P GPIO are mostly low speed pins.

Right, that was my understanding of the 40-pins. So just to clarify, when you say a “hat” it’d actually connect through the USB port?

Does S905Y2 support hardware crypto? If so, this board would be an interesting candidate for a battery-power travel access-point + pihole etc. Thanks for the info!

Yes, it does. Actually most 64-bit Cortex-A SoCs include Armv8 crypto extension. I’m still not sure why the extension was not included in Broadcom processors used in Raspberry Pi boards.

I hope raxda does a better job of mainlining the support for this board than SinoVIP did with the similar Banana Pi M2 Zero.

Will the board support i2s sound interface on the expansion header? Hopefully also on the same pin as the pi zero?

Ooo this is exciting! Hoping they will be available without crazy shipping prices.
If MJPEG decoding can be thrown through the AVE successfully then I think I’ve found my new Hyperion controller!

although a usb-c port could help a bit on the CSI side,but the pin will still becomes a tricky little thing if try doing a compact headless AI vision project…

There is one thing missing from this board that would have been a nice feature. The rPi Zero and Zero 2 have test pads for 5V, Ground, D+ and D- below the micro USB ports. These are used by a number of available boards via pogo pins to add a USB hub and various USB peripherals. See for example https://www.waveshare.com/wiki/PoE/ETH/USB_HUB_HAT. Perhaps a future revision of the board could add this feature?

Ameridroid have 1GB and higher in stock https://ameridroid.com/products/radxa-zero?variant=39437048872994