Last September, we wrote Banana Pi team was working on an Amlogic S905X3 SBC called BPI-M5 and very similar to Hardkernel ODROID-C4 board launched in April 2020. At the time, we noted the Banana Pi BPI-M5 did add a 16GB eMMC flash on-board by default, while ODROID-C4 requires booting from a MicroSD card or a separate eMMC flash module.

We also pointed out software and community support is usually much better for the ODROID board, and it was brought to our attention that BPI-M5 board uses 5V voltage only via USB-C, while the Hardkernel board support a wider 5.5V to 17V via a power barrel jack, and this could lead to potential power issue for customer connecting drives to USB 3.0 ports. The good news is that you can now buy Banana Pi BPI-M5 SBC on Aliexpress for $53 plus shipping. 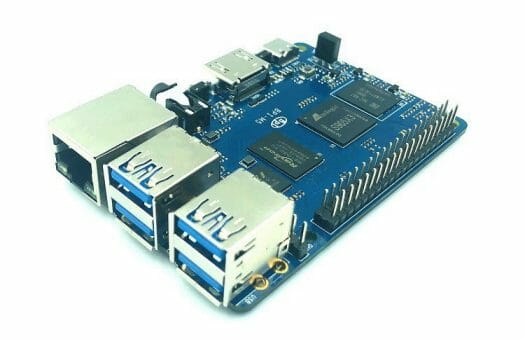 Banana Pi BPI-M5 specifications haven’t changed, and we can see the board compared to ODROID-C4 and Raspberry Pi 4 Model B in the table below. 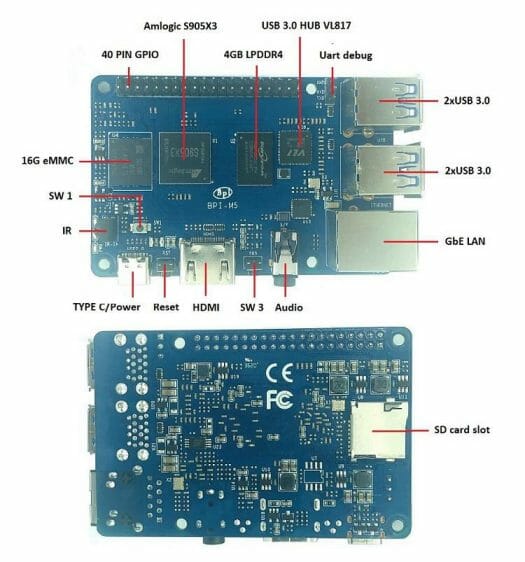 While all three boards support Linux and Android, software support will differ a lot. Raspberry Pi 4 Linux distribution of choice is Raspberry Pi OS (Debian based), and Hardkernel distributes and supports Ubuntu Mate for ODROID-C4. The latter is likely the best of the three SBC’s to run Android. Banana Pi also offers Android and Ubuntu Mate for BPI-M5 on the Wiki which could be because they “leveraged” the images made for ODROID-C4.

Banana Pi BPI-M5 is probably the best value considering it comes with 16GB flash, but you may expect some challenges with software, and as explained further above, power issues may occur when connecting multiple drives to the USB 3.0 ports due to the power circuitry implementation.

The Vontar X3 is better option

Sure, especially with Slimbox firmware. This SBC could be used for Linux, but Rock Pi 4 with NVMe seems much better option.

Wow great price, we can install linux on it ? Batocera distrib too ?

we can install linux on it ? Yes !

I haven’t tried Batocera yet but EmuELEC works

Because I made a rookie error, and I trusted Banana Pi data was correct… 🙂

At least you are honest 🙂

Compared to Android boxes with s905x3 and 4/16 or 4/32 and gigabit Ethernet the technically equal SBC’s (like this banana thing) are seeming overpriced. For around $35 you also get a case, power supply and remote with the android boxes.

… and the time it takes to hack them, and the lack of I/Os, and …
Been there done that. The only times I bought such devices was for an RK3288 then an RK3399 which were only available in this format by then. But what a mess to put linux on undocumented devices! Sometimes even the regular DDR training code doesn’t work on them, or you can’t find it online!

Same as Odroid-C4. No WIFI/BT Built-in. Apparently No SPI memory either?. Good luck getting software support from Banana Pi forums. C4 has a SPI-like u-boot solution running from uSD called Petiboot and a mature custom Ubuntu 20.04.1 LTS OS w/Gnome/Wayland(GPU HW w/blob GPU drivers) and mainline kernel. A 16Gb eMMC module built-in is a nice feature but may be a little small for a linux desktop SBC machine. Is the 16Gb eMMC module removable on the Banana Pi BPI-M5? It would be interesting to see if all OS’s available for C4 are gonna work on BPI-M5.

“A 16Gb eMMC module built-in is a nice feature but may be a little small for a linux desktop SBC machine.”
Yes, indeed: I checked my Ubuntu install (basic GUI): 21GB OS install.
Especially with docker, you need more than 16GB for the OS.

Sounds more like the recommended – not the minimum. A fresh Debian minimal install will be satisfied with less around 2 gigs for the root partition.

You just need to know what else you want to locally in the future!