AFAICT, while the documentation is dated January 2021 and TI announced the processor in February in a blog post with a cryptic title, it was only first picked up by Embedded Computing in early May. Besides the processor itself, TI also provides an AM64x starter kit and a full-featured AM64x evaluation kit, and several companies are already preparing development boards and modules as we’ll see further below. 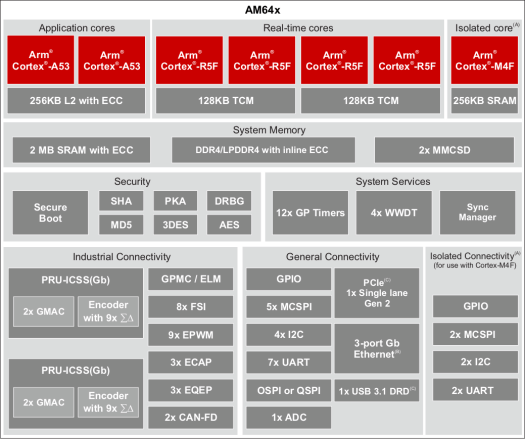 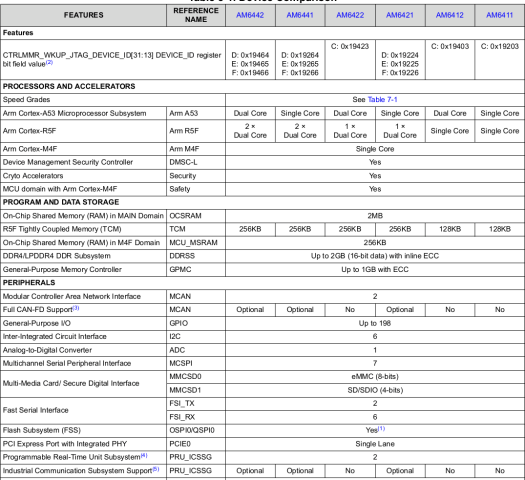 You’ll find more technical details in the 252-page datasheet, as well as links to the individual parts.

AM64x starter kit and evaluation board

As noted in the introduction, Texas Instruments offers two development platforms with a starter kit, and an evaluation board with more features and interfaces. Let’s have a quick look at both.

The evaluation kit has many of the same features but comes with a 16GB eMMC flash, three RJ45  100/1000M Ethernet ports, a 1-inch display, a 4-lane PCIe connector, an FSI interface to connect C2000 MCU, on-board measurement capabilities, and more. There’s no wireless module. 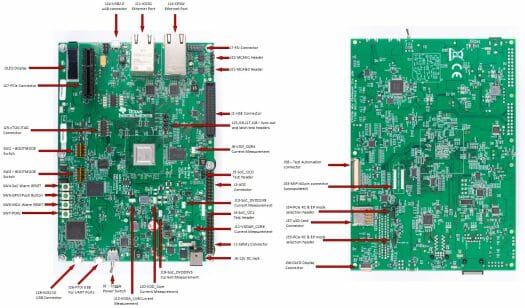 Both kits are supported by the TI Processor SDK with Linux/ RT Linux kernel, Yocto filesystem, and out-of-box demos.

AM64x starter kit is sold for $99, while the AM64x GP EVM development platform goes for $299. You’ll find more information on the product page for the starter kit and EVM.

There are at least three companies that have already announced, or at least set up a product page for their AM64x system-on-module, with SolidRun SoM that also includes a sub-GHz SimpleLink microcontroller for 6LoWPAN/MIOTY, PHYTEC phyCORE-AM64x module, and TQ Embedded’s TQMa64xxL with four real-time Ethernet interfaces.

The modules should really become broadly available in 2022 with TQ Embedded announcing availability in Q1 2022, and PHYTEC expecting ALPHA samples of the module in Q4 2021.

Someone went overboard. With all these cores it would be a nightmare to program this thing and avoid race conditions.

I don’t think this is for you.
There are really only two application cores, the R5 cores are for an RTOS, so that’s more like a special purpose part of the chip. The M4 core appears to be for some kind of security applications. All of the minor “cores” are also MCUs, not full on CPUs.

A candidate for a new beagle?

This looks like a nice chip, if you have use for its cores and peripherals and don’t need graphics. NXP’s closest competitor appears to be i.MX8M Plus, though with a different focus. Both are rather expensive chips, alas.