I started RasPad 3 review last week with an unboxing of the tablet shell for Raspberry Pi 4, together with assembly instructions, and a first boot after flashing Raspad OS to the system.

In the first part of the review, I mentioned that I’d probably focus the remainder of the review on Ezblock Studio visual programming IDE, as the rest of the software is almost the same as using a standard Raspberry Pi 4, the other difference being the touchscreen-friendly RasPad launcher.

But Sunfounder explained to me it would be hard to check out Ezblock as it’s designed to control robots and other hardware platforms, and requires an extra HAT (see Kickstarter campaign) to allow the Ezblock APP to connect through Bluetooth (it cannot be directly linked to Raspberry Pi through the built-in Bluetooth).  Here’s an example of a robot that is compatible with Ezblock Studio: Picar-X.

Finally, I was also told Ezblock is not necessarily related to RasPad 3 and Raspad OS, so I’ll mostly skip the IDE, and focus on other parts of the review. Notably, workarounds for some issues I encountered, benchmarks to check for eventual thermal throttling, and some use cases where Raspad 3 form factor and features may be suitable.

The first time I used RasPad 3, everything seemed fine, until I decided to put it on a tablet and would automatically switch to portrait mode, making the tablet unusable that way.

So I went to enable SSH in the settings as it is disabled by default (good for security), and accessed the terminal using username “pi” and password “raspad”. From here, I disabled the motion sensor (I2C) and forced the display to landscape in /boot/config.txt:

You can also set lcd_rotate to 1 to rotate 90 degrees, 2 (180 degrees), or 3 (270 degrees). While I was in the terminal, I also configured the system to remotely take screenshots over SSH, and I took the occasion to update the system with:

since the image is adapted from Raspberry Pi OS released last year.

I notified Sunfounder about the issue and asked if it was possible to calibrate the sensor, and indeed, they shortly replied with a solution. So I reverted my changes to config.txt and ran the command:

Press “s” to start calibration, rotate the device 360 degrees around 3-axis, and press Ctrl-C once done.

While RasPad OS is based on Raspberry Pi OS, the interface is quite different due to the customer launcher. 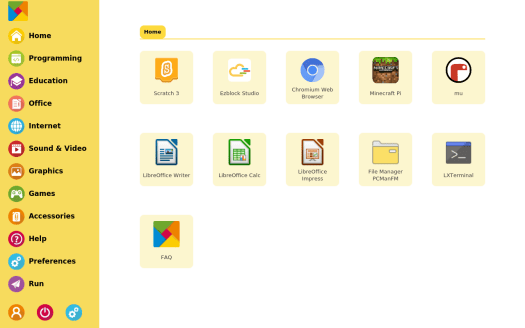 Everything is about the same as in Raspberry Pi OS, except it’s optimized for a touchscreen display. Another difference as previously noted is Ezblock Studio visual programming interface. 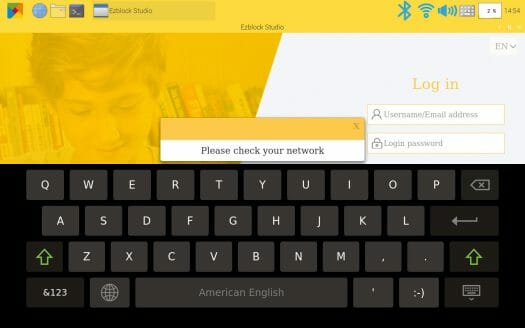 You’ll be able to log in or sign in, and with a black keyboard taking half the screen in landscape mode. Better switch to portrait mode! 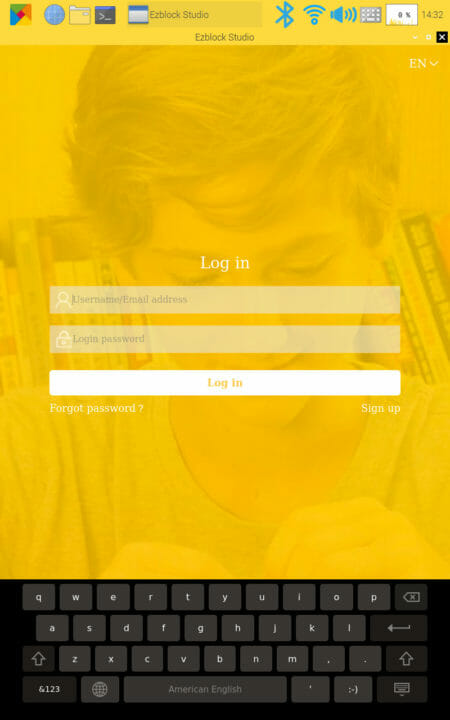 As a side note, that keyboard is only available in Ezblock Studio, and other programs rely on a top keyboard that can be shown from the top bar. The keyboard does not show automatically when selecting a field. 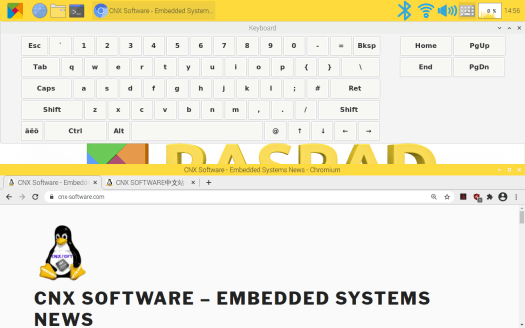 Back to Ezblock Studio. After logging in, we’ll get brought to the getting started guide, which tells us to tap on an icon to select a product that is either Ezblock HAT, some kits based on Ezblock HAT, or robots. 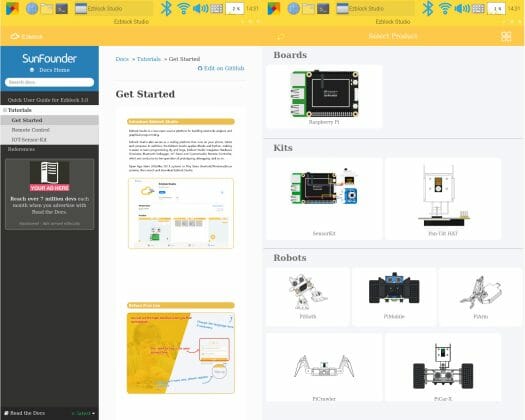 That explains why I’m not able to play with Ezblock Studio for this review.

AFAICT, settings are also the same as with any other Raspberry Pi SBC, but just presented in a different way. 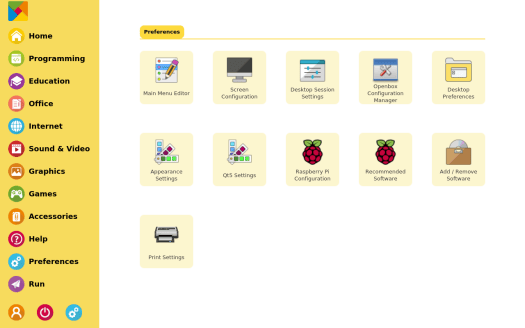 When I first put Raspad 3 tablet in the hands of my girlfriend, she said it was quite heavy (960 grams), and then asked why it was noisy (that’s the fan). But I noticed something interesting… The noise almost entirely goes away when the tablet is placed on a table, as the holes for air intake are blocked which could lead to overheating and then throttling.

So I decided to run benchmarks twice. Once on a stand with optimal airflow, and the second time on a table.

Let’s start with the former. I used sbc-bench.sh script for testing performance and thermal cooling.

But it would never start showing too high CPU usage. After looking at the CPU usage in htop I understood why. 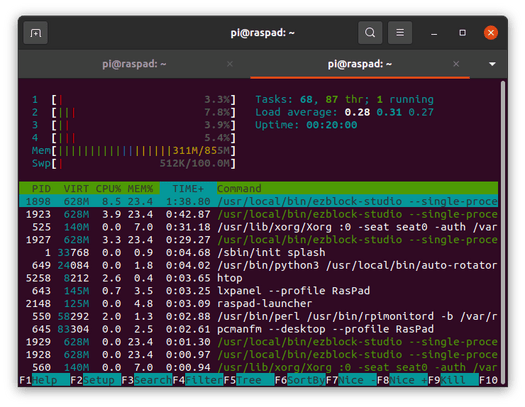 Ooops, Ezblock Studio is running in the background. I forgot to close it, and when we are in Raspad OS launcher we can’t see which apps are running. Tapping on the top left icon allowed me to access the desktop and close Ezblock Studio. So sbc-bench.sh could start and complete the benchmark: 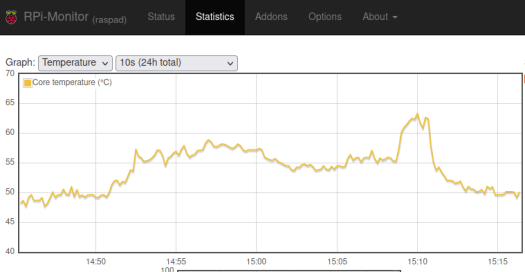 The machine sat idle at 49°C and never went above 63.4°C during the benchmark with an ambient temperature of around 33°C. That’s good as no throttling occurred. In terms of performance, that’s about the same Raspberry Pi 4 benchmark results I got in 2019 with a thick heatsink on the exact same board.

Let’s move the Raspad 3 tablet flat on a table, and wait for a few minutes to check if the idle temperature is higher. 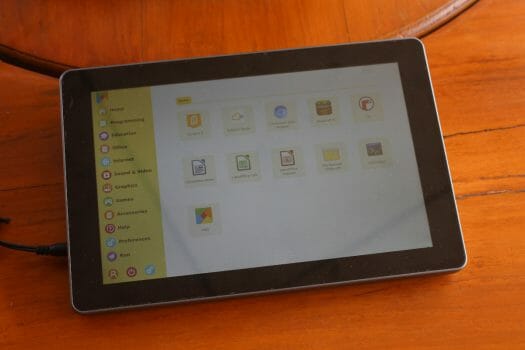 It is, but not that much more at around 53°C. I can imagine the result could be worse on a different desk/table, as my table here is not perfectly flat, but still reduces the airflow.

Let’s run sbc-bench.sh again and see what the results are:

Results are about the same, and throttling did not occur either. 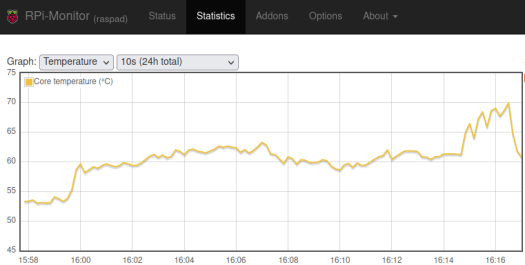 The temperature was significantly higher but always under 70°C, or about 6 to 7°C  more than when the ventilation holes were not blocked.

What can I use Raspad 3 for?

While Sunfounder calls the Raspad 3 a Raspberry Pi 4 tablet, people should not think they are getting a tablet when purchasing Raspad 3, unless they are fine with the thickness (49mm max), a close to one kilogram weight or about twice as heavy as a standard 10.1-inch tablet, noise due to the fan, and short battery life again due to the fan plus unoptimized apps like Ezblock Studio that uses about 15% of the CPU usage while idle. For reference, after a full charge, the battery was fully depleted after four hours not doing that much apart from updating the OS, and taking a few screenshots over SSH.

So instead, I’d rather see Raspad 3 as a mini PC with integrated display, a bit like GOLE 10 Windows 10 mini PC, but using a Raspberry Pi 4 and Linux.  I can think of two main use cases:

Note that if you want to use the GPIO, you’d need to separately purchase something like T-Cobbler to get easy access to the pin outside of the “tablet”. You’d also need to take apart the enclosure each time you insert or remove the GPIO ribbon, which may not be very convenient.

I’d like to thank Sunfounder for sending RasPad 3 for review. If you think think it’s for you, Sunfounder sells the mini PC on Amazon or directly on RasPad website for $219 and up. Note that does not include the Raspberry Pi 4 SBC nor a microSD card.

Can you please check with lsusb which USB3 hub is included into Raspbrick?