Kendryte K510 is a 64-bit tri-core RISC-V processor clocked at up to 800 MHz with AI accelerators that succeed the 400 MHz Kendryte K210 dual-core RISC-V AI processor released a few years ago first in Kendryte KD233 board, and then boards like Maxduino or Grove AI HAT conveniently programmable with Arduino or Micropython. 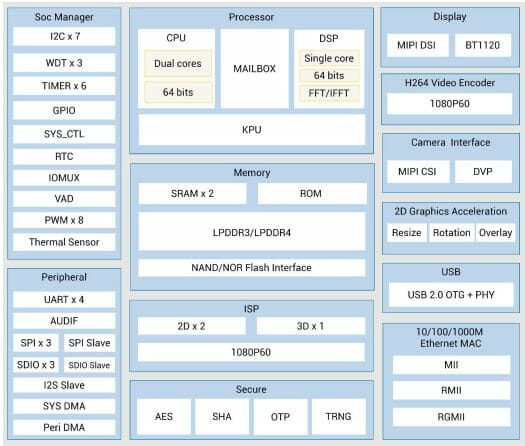 The press release did not have much information, but multiple sources provided additional details to CNX Software, so we have Kendryte K510 specifications:

The processor can boot from SPI NAND flash, eMMC flash, the SD card, or even from UART. Kendryte K210 was interesting to play with but the performance is limited, and for instance, I got 15 to 18 fps in a face detection/tracking demo, and this type of lag is not suitable for robotics applications. Going from 1 TOPS to 3 TOPS in Kendryte K510 will certainly help with applications demanding faster response times. . [Update: the company published some power consumption numbers: Typical power 2W; Standby Current < 2mA. ]

We’ve been told the SDK was still under development, and that stock would be limited to a few K samples this year due to the current lack of 28nm chip product capacity.  So it’s more likely to become broadly available in 2022. That means manufacturers of low-cost AI camera boards will have to switch to other solutions such as Rockchip RV1109 processor this year. 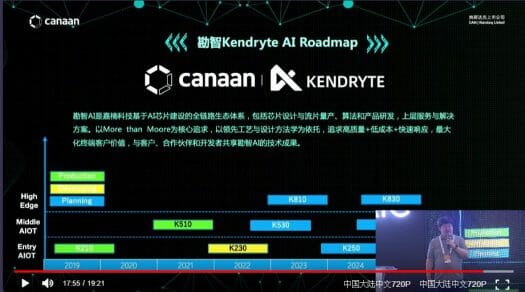 I hope they fixed the MMU in this thing so you can actually boot proper Linux.

What is the issue here?

Nothing is broken in K210, but it does not come with an MMU, so it’s more difficult to run Linux without randomly crashing.

That’s not correct. The K210 has an MMU and a perfectly functional one at that. The CPU core, cache, MMU complex is I believe basically straight Berkeley “Rocket” RISC-V as at the time Kendryte designed the SoC. The problem is that was the pre-ratification Privileged Architecture version 1.9.1, not the ratified 1.10, and they are incompatible.

The bigger problem with running Linux on a K210 is simply that 8 MB is not enough to run a modern Linux kernel.

OK. I stand corrected. I’ve always thought K210 only got Linux NOMMU support because there was no MMU.

For instance, I think many microcontrollers are still manufactured with 55nm to 90nm processes.

I think 28nm/22nm is currently the ideal point for power consumption and cost per transistor, it’s an obvious choice for this type of entry-level SoC. Rockchip RV1109 is in a similar market with a 14nm implementation, but that’s still the exception. As they seem to have their own NPU design, they probably went with the same process as before to save development cost, but scaled it up from 0.5 TOPS in K210 to 3 TOPS, which is an impressive upgrade. I guess they freed up a lot of area by replacing the on-chip 8MB SRAM with the LP-DDR4 controller. It’s… Read more »

If it does what you need it to do within the price, power etc criteria you have why does something you can’t see without millions of dollars of specialist equipment matter?

Half asleep when you wrote this? “Most low-cost AI camera boards will likely be based on Allwinner chips like RV1109 or R329 this year.”

I went out on a limb based on feedback from one vendor. I’ve now rephrased that.

I know where the R329 is coming from. Somebody is working on making an AI camera board with R329 plus a USB camera. Not sure why just yet.

Hopefully they release the full reference manual (datasheet with all the register details, etc) to the public. They were hostile to anyone requesting access to the reference manual on K210 which is why I never ended up using it. Its a shame because 64bit dual/triple core RISC-V looks very cool.

Sidenote: If know where I can find the K210 full reference manual, that would be super cool.

@Yofie
Kendryte K210 TRM is acctually not very useful. It is just a set of .md files with only a little bit more information than can be found in SDK .h files. You can use DesignWare manuals as most perpherals are compatible.
Hopefully, there will be the full Techincal Refference Manual available for K510.

Is it just me, or are you ready to start seeing Star Wars amounts of robots roaming everywhere?

Well, the force is all in on RISC-V. Well, as long as Darth Jensen, General Gelsinger, and Count Segars don’t spoil the party along with an army of clones from Emperor Pooh.