SmartBug is a smart switch based on ESP32 wireless SoC, equipped with several sensors to measure temperature, humidity, power usage, and listen to sounds. It is designed to fit neatly into most in-wall sockets found around the world.

Each SmartBug relies on mesh networking to communicate with each other and extend the range, WiFi for Internet connection, and Bluetooth low energy (BLE) to control additional devices without the need for any additional hub. 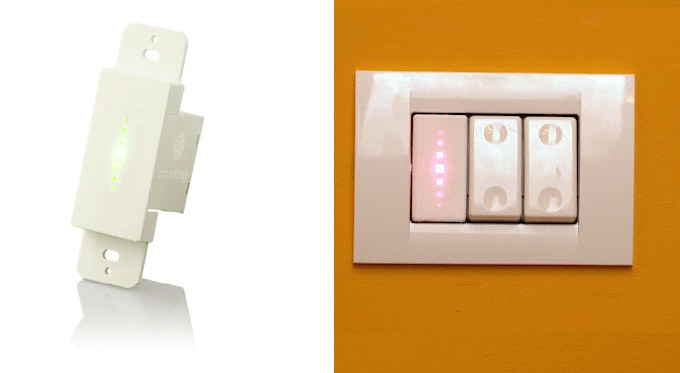 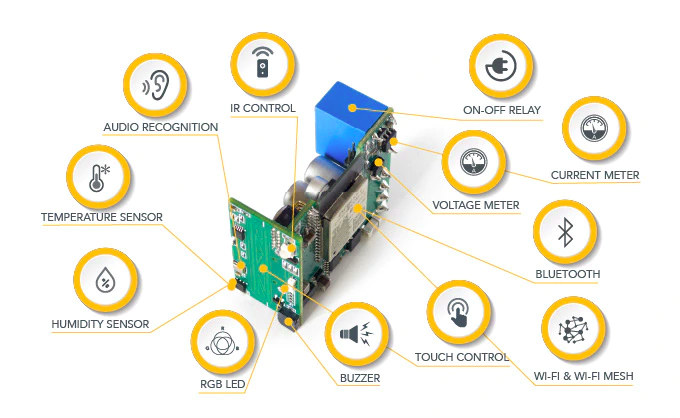 SmartBug did not mention which exact processor is used in the switch, but based on the specs it should be ESP32, as this was further confirmed by Espressif Systems.

The company shows how to install the switch into your in-wall socket in the video below, and it looks straightforward enough.

Once installation is complete, you’ll need to configure the SmartBug with the mobile app from the same name. It’s not available yet, but you’ll be able to install plugins (e.g. thermostat, TV, washing machine remote controls, child monitoring…), as well as dashlets for example to show the temperature and humidity from the sensor in the app. The platform will be open so additional plugins and dashlets can be added by developers.

After that, you’ll be able to control appliances connected to the relay, or wirelessly over Bluetooth, WiFi, or even infrared signals. You may not even need the app anymore, as the touch panel can recognize various gestures to allow you to turn on/off appliances, adjust the temperature of a thermostat up or down, and so on.

SmartBug smart switch has been on Kickstarter for a few weeks and with 8 days to go the company has raised over $25,000 so far, well over twice their funding goal. Rewards start at $47 for the SmartBug with the app and 12 plugins. Shipping adds from about $6 US to Hong Kong and up to $42 depending on the destination countries. Perks should start to ship in October 2021.

I like it very much. Hoping it’s free to integrate onto some domotic controller such as Domoticz, Openhab and others, with API REST as a nice to have. 47 dollars is too expensive, however, but we have to consider the (only?) other element that fits inside a wall switch are the SonOff TX and the Shelly, and they only are switch (+button), without sensors or Power meters.

This dimmer is ESP32 based and hackable. Includes power monitoring and a touchscreen LCD! $59
https://www.iotgizmo.com/product_display.php?prod=VDVPVjJnUXE5eFdyeWhYaWppWmp6QT09

Shelly 1PM can fit in an outlet box, has power monitoring, and is UL listed (IIRC, UL listed might cost more, but it’s available – just checked my 1PM box). My cost was around $30 I think.

At 1:09 in the video — “Replace the old wall switch with your new SmartBug and connect the wires” and that’s the technical explanation out of the way. Great! They’ve solved the neutral wire issue then? No, unfortunately they haven’t. You must have a neutral wire to the switch box for this to work. It’s a nice looking product and I’m glad they’re using the ESP32, but they’re going to have a world of grief with returns and refunds unless they start mentioning somewhere in the campaign (not just in answer to specific questions) that it won’t work without that… Read more »

Where I live there are live (L) and neutral (N) wires, but usually no ground. I’m not sure how this is supposed to work without a neutral wire. We are probably talking about different neutral wires.

UK here, it’s not that uncommon to have a light bulb socket wired with live and neutral but only the live goes to the light switch. Break the circuit, no light. Change a light bulb while you’re grounded? Get a zap. Fun! Also means smart switches don’t have a way to draw power.

You can buy 2-wire dimmers. They work by always leaving a trickle of current flowing through the bulb. That always-on trickle allows the switch electronics to be powered. Downside is that 2-wire dimmers work fine with incandescent bulbs they don’t work very well or even all at with common LED bulbs. Incandescent bulbs are just big resistors and don’t have a problem with passing a few milliwatts of power continuously. Internal LED bulb power supplies are not so cooperative. Any 50+ year old house in the USA getting a big remodel will upgrade the 2-wire circuits to 3-wire. 3-wire is… Read more »

Technically not legal in most jurisdictions to permanently attach this or most other home automation thingies to mains power in the USA if they have not been tested by a NRTL (nationally recognized testing laboratory). Doing so is a violation of the National Electrical Code.

Of course, this won’t be a problem until you start to sell your home or file an insurance claim for an electrical fire.