Google has just announced the release of Android 12 Beta. We already covered the first Android 12 developer preview with changes including support for AVIF image format, trust and safety improvement, and enhanced media transcoding.

But with the release of Android 12 Beta, Google also introduced significant changes to the user interface created with a design language called Material You, plus some new features that we’ll explore in this post. 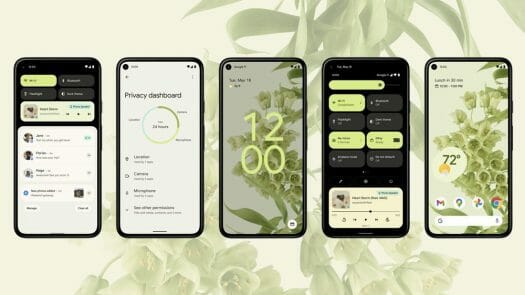 The most notable user-facing changes include:

Apart from UI changes some other interesting developments that were not specifically addressed at the time of the Android 12 developer preview include:

Android 12 Beta was released on schedule, and we should have three more beta releases, one per month, while the final release of Android 12 slated for the fall.

You can try Android 12 Beta today on Google Pixel phones and other compatible devices from ASUS, Oppo, Xiaomi, OnePlus, RealMe, Sharp, Tecno, TCL, Vivo, and ZTE. Alternatively, it’s possible to try GSI images, or if you don’t have any compatible devices simply run Android 12 in the emulator in Android Studio.

More information may be found on Android developers’ announcement.

May someone explain how is allowing applications to scan devices around you without your consent a “privacy improvement” ? I’d call this yet-another-privacy-regression instead, allowing applications (hence online services) to constantly locate you or possibly even to enumerate your devices. Let’s have fun seeing ads that propose you to replace some of your detected devices that are known to be old based on their MAC address range… I’m really wondering when all this totally useless crap will end. At least not as long as the OS is developed by a company making revenue by selling ad space.

If an app asked the user to scan devices near the smartphone, then they would need to give the app permission to get the location. So a app would ask the permission for one thing and get permission for other thing.

The app doesnt need to know your location to scan for devices.

Now they will probably only need to ask for permission to scan devices.

If it does ask for this (and only this) it’s then an improvement. If it doesn’t need to ask for anything it’s a regression.

Android 12 Beta 3 released with final APIs: https://android-developers.googleblog.com/2021/07/android-12-beta-3.html Some new features include Scrolling screenshots – When users capture a screenshot of content that’s scrollable, they’ll now see a “Capture more” button to extend the screenshot to the full content and they can then adjust the crop. On-device search – Platform support for AppSearch, a new high-performance on-device search engine. Privacy indicator APIs in WindowInsets Camera and microphone toggles configurable for enterprises (i.e. for managed devices) and not only consumer devices Better, faster auto-rotate – Android’s auto-rotate feature has been enhanced with face detection, using the front-facing camera to more… Read more »