While Windows 11 may have some problems running some x86 machines, I previously saw Windows 11 Arm on Raspberry Pi 4 with instructions telling you to download the images from UUP Dump and flash the ISO with Windows on Raspberry Pi Imager.

At the time, I did not look into details, and it seemed was some hack involved, but I’ve just been told Windows 11 could also run without modification on some SolidRun’s single board computers, namely MacchiatoBin and CN913x CEx7 evaluation board.

Marcin Wojtas explains Windows 11 Pro (version 22000.168) could be installed unmodified on an Arm computer based on MacchiatoBin mini-ITX board equipped with an NVIDIA Geforce GT630 GPU (using EFI Frame Buffer), a SATA SSD, connected through Ethernet (via USB2ETH), plus a mouse and keyboard.

So what’s the trick, and what do Raspberry Pi 4 and a board like MacchiatoBin have in common? Answer: Arm SystemReady ES certification which mandates compliance with UEFI, ACPI, and other packages in order to boot off-the-shelf images like Linux distributions, or, in this case, Windows 11.  You’ll find the full list of compliant systems on Arm’s website. 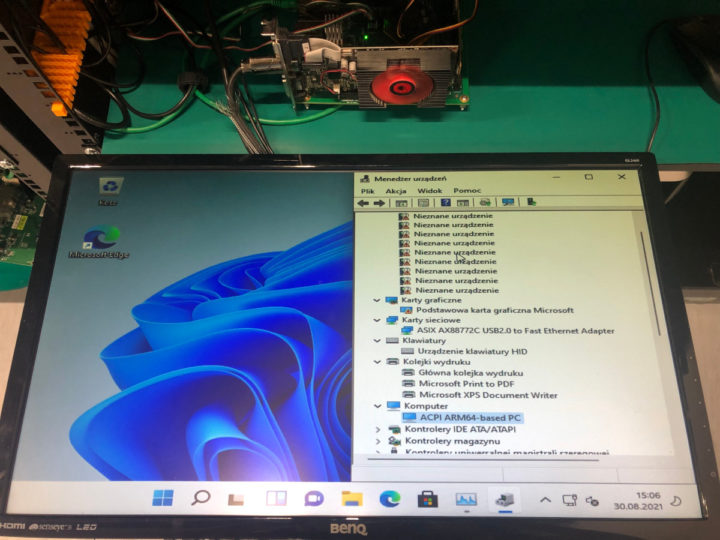 The photo above shows a generic “ACPI ARM64-based PC”, and you’ll also notice the graphics card driver is missing, relying on graphics support from the EFI binary, and Ethernet is not working out of the box which is why a USB 2.0 to Ethernet adapter was used instead. WiFi and NVMe do not work at this time either.

That’s still pretty neat. You’ll find the source code of the EDK2 open-source firmware need for this to work on Marvell Armada7k8k & CN913x hardware on Github. As a side note, Marcin previously managed to run Windows 11 on top of ESXI ARM hypervisor.

Does this change anything wrt Windows on ARM GPU support? Does Microsoft support anything other than the Adreno GPUs inside Snapdragon/SQ SoCs?

Not only the gpu, also the vpu. Without vpu even linux arm suffers a lot to offer a decent experience. So there its the worst of both worlds.

Join the armbian discord Tkaiser.
We are waiting for your rpi love there hahaha

“Arm SystemReady ES certification which mandates compliance with UEFI, ACPI, and other packages in order to boot off-the-shelf images”

… that is good news. More standardization in the ARM world.

Interesting how Microsoft / Windows 11 will handle the underlying CPU is something else than x86, and a user trying to install x86 software (download from some website).

Is that what Microsoft tried to solve a few years ago via a Microsoft app portal?

I think there’s already x86 to Arm binary translation.
And with Windows 11 it’s even possible to create binaries that mix Arm and x86 code.
https://www.cnx-software.com/2021/06/30/arm64ec-nattive-arm-x64-emulated-code-windows-11-higher-performance/

x86 binary translation (32-bit) exists for quite some time but last Dec Microsoft announced also x64 binary translation (64-bit) ready to be tested by end users. The latter obviously made it into Win 11 now and the beauty of this approach is that kernel, libs and GPU/VPU acceleration all run natively while just few parts of the x64 application need to be translated.

With a desktop experience in mind all of this is useless on ARM systems lacking an Adreno GPU/VPU.

The question here is why you want it to run windows? and even worse, windows 11? The question is pretty much retorical, nobody does, but it is someway interesting to check over how much effort is putting into this. Anyways, a Raspberry Pi 4 can’t give a full desktop experience regardless of the OS nevertheless, we will have to wait until Raspberry Pi 5 with a big bump in CPU+GPU and M2 port for SSD, otherwise we are stuck with a struggling experience, specially when loading websites. It can load them? sure, but we need it to do it lighting… Read more »

> The question here is why you want it to run windows? From what I’ve observed on kids switching from linux to windows, they experience the same amount of trouble with unexplainable errors in both cases when launching games or downloaded stuff. However when they ask for help on forums very few people respond about linux and a lot respond crap about windows. So they feel more helped even if in the end they try 40 different stupid advices that do not work instead of trying to figure the problem by themselves. So that’s mostly a community approach, like RPi… Read more »

It could be because it’s really on graphics support from the UEFI binary, and Windows 11 GPU drivers are not available yet.

it seems that tkaiser is correct – Adreno is the only platform Microsoft supports.

Nvidia did release arm32 drivers for Surface 2 but they’d need to recompile for 64 bit Windows 11.

Is Linux usable as a desktop OS? yes. But is it desirable, no. There is pretty much your answer, Linux needs a lot of polish to be a viable desktop OS, only systems running KDE GUI come close to Windows in terms of functionality but often lacks the detail of windows UI in many areas (want to turn off stupid RGB lights on your mouse under Linux, good luck with that). Windows has filed off the rough edges of computer OS making it more accessible but also lowered the technical bar, these people look at Linux and go no thanks.… Read more »

Windows 11 has quite firm system requirements, among which TPM 2.0.
So … does a Raspi4 fulfill those requirements, or is Microsoft requiring less on ARM, or is this a hacked install on ARM?

Well arm trustzone etc. can be made to behave as a tpm. Kind off…

People on Internet have other views

”
How to easily install Windows 11 on any computer that supports Windows 10, no TPM 2.0 Required. “