SolidRun HoneyComb LX2K is part of our list of the 5 most powerful Arm SBC’s in 2021. The mini-ITX board features an NXP LX2160A 16-core Arm Cortex-A72 processor, supports up to 64GB RAM, offers high-speed networking thanks to up to 4x SFP+ 10GbE cages and a Gigabit Ethernet port, as well as four SATA ports, a PCIe x8 slot, M.2 SSD slot and more.

The board is ideal for networking applications and can be also be integrated into an Arm workstation for native application development. But just last month, we noted that while SolidRun talked about SBSA compliance a while ago, the status was unclear. The good news is that HoneyComb LX2K has just now become a certified Arm SystemReady ES (Embedded Server) compliant platform. 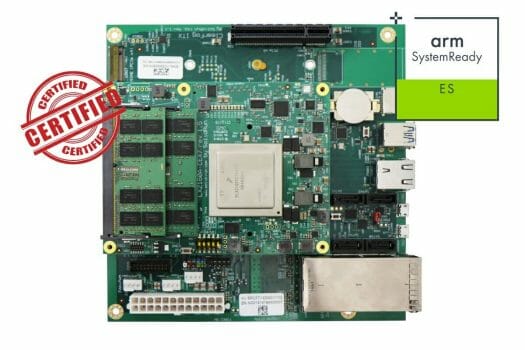 Arm SystemReady is a set of standards and a compliance certification program that ensures systems just work with generic, off-the-shelf operating systems straight out of the box like you would install a Linux distribution on a x86 desktop PC.

Arm SystemReady builds on the Arm ServerReady program, but targets a broader set of devices in four different categories:

HoneyComb LX2K joins two other “Level 1” SystemReady ES compliant platforms with NXP Layerscape LX2160A Reference Design Board (RDB) and Raspberry Pi 4 SBC, and so far has been tested to work with the following operating systems:

But what does “Level 1” mean exactly? There are three levels of compliance:

The table below provides more details about the potential waivers for each level for both ES and IR hardware. 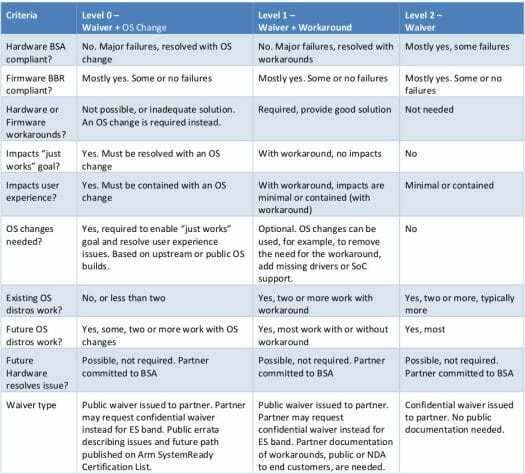 If you’ve been waiting for certification before getting the board, it’s now compatible with most distributions, and you can purchase it directly on SolidRun store for $750.

Since the board is based on COM Express Type 7 module with NXP’s LX2160A 16-core processor, custom hardware based on the CEX7 module should be able to achieve Arm SystemReady ES certification much more easily.

Some certainty that OSes will work out of the box certainly helps though I’d like to know what the failures and workarounds were that stopped it being level 2. Personally I’d want to run Manjaro on it so I’ll wait until someone shows that working first.

The information provided is essentially useless unless they actually identify the “hardware or firmware workarounds” necessary for “the user experience of software “just works” can still be mostly achieved”.

The waivers required are for the PCIe subsystem. The Root Port config region is not part of the device ECAM region. We have worked around this in firmware so it “just works” by only exposing the device PCIe config space and not the root port. We are however adding configuration options so this behaviour can be switch for OS’s like ESXi, and possibly Linux due to a policy change that would allow the full PCIe tree to be exposed by means of a quirk.