This follows last year’s ODROID-N2+ based Home Assistant Blue which was a limited edition and has now been discontinued, albeit still supported. The carrier board for Home Assistant Amber is designed from scratch and notably includes Silicon Labs MGM210P Mighty Gecko Module with support for Zigbee 3.0, OpenThread, and Matter (Soon), as well as M.2 socket that can take an NVMe SSD, or an AI accelerator card. 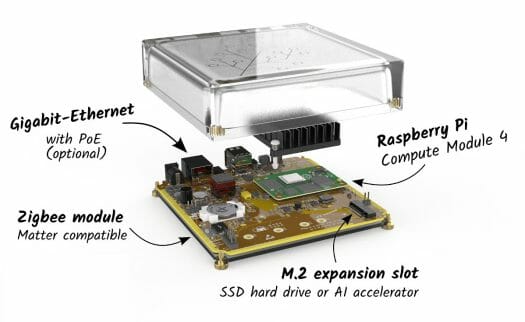 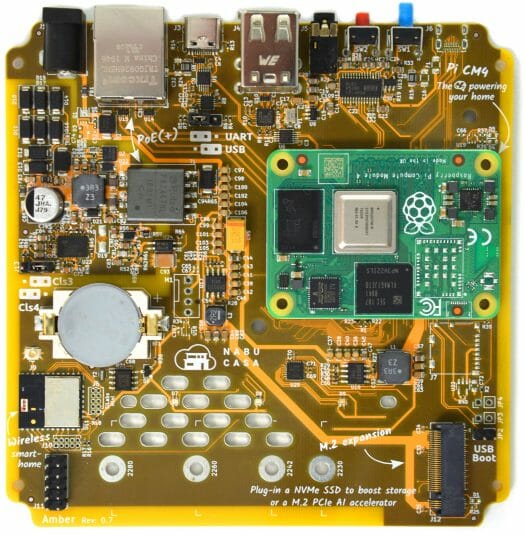 Home Assistant Amber will run the latest version of Home Assistant, and at this time supports Zigbee and OpenThread, with Matter support coming later once the Silicon Labs Matter SDK is released.

The device can be your Smart Home gateway controlling your lights, thermostat, TV, music, and more with over 1,000 different devices and services supported including Philips Hue devices, as well as online services to get information about your commute, air quality, currency exchange rates, and so on. You’ll find the list of supported devices and services on the Home Assitant website.

Home Assistant Amber has just launched on Crowd Supply with a $140,000 funding goal. Rewards start at $99 for a kit with the board, enclosure, and either PoE or a power adapter, but without a Raspberry Pi CM4 module. But you can also get a complete system for $149 equipped with a Raspberry Pi CM4 with 2GB RAM and 16GB storage using a power adapter (no PoE). Shipping adds $8 to the US, $18 to the rest of the world, and backers should expect to get their perks shipped from May to July 2022.

It does not look to be designed for voice control, but Home Assistant can work with Amazon Alexa and Google Home smart speakers.

No integrated mic but you can of course connect your own microphone array via USB, like example the ReSpeaker USB Mic Array, or the used Sony PlayStation Eye which has an decent built-in microphone array if on a DIY budget.

Pretty sure that MGM210P/EFR32MG21 can not support Zigbee and Thread/Matter at the same time.

Pretty sure that MGM210P/EFR32MG21 can not support Zigbee and Thread/Matter at the same time?

I think that you have to choose to flash/run either a Zigbee stack or a Thread stack firmware?

Multiprotocol support is an interesting topic, and Silicon Labs has a user guide about it: UG103.16.

I guess what would be interesting is Concurrent Multiprotocol with Zigbee/Thread (on the same channel):

Zigbee and Thread are one example of suitable protocols for a concurrent multiprotocol implementation (not yet implemented in Silicon Labs stacks).”

“yet”… so we have our fingers crossed!

It’s better to forget to run a coral device with CM4 through PCIe.
https://github.com/google-coral/edgetpu/issues/280
Maybe it’s possible through USB3 connection and VL805 adapter at the cost of reducing by an half the performance.

Home Assistant Amber is however lacking a USB 3.0 port as the only PCIe lane is used for that M.2/NVMe slot

Mine was a general reasoning.
In particular you could use an external VL805 adapter board and try to attach the Coral to one of the USB external port with a great loss in perfs