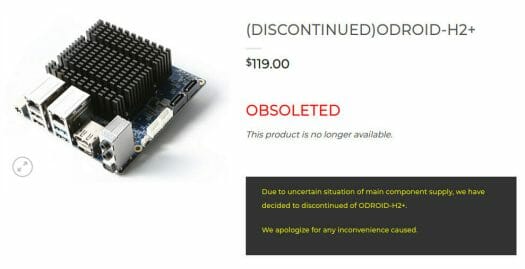 Hardkernel has just discontinued ODROID-H2+ single board computer based on the Intel Celeron J4115 Gemini Lake Refresh processor, which followed ODROID-H2 SBC itself being discontinued shortly after Intel decided to phase out Intel J4105 and other Gemini Lake processors.

The reason given is the “uncertain situation of main component supply”, which could mean Celeron J4115 processor is hard to get (or expensive), or the Realtek RTL8125B chipset provides 2.5GbE networking. That means Hardkernel does not offer any x86 SBC at this time. That’s a shame before ODROID-H2+ was a well-supported SBC running Linux or Windows, and great value for money at $119, especially for people interested in the two 2.5 Gbps Ethernet ports found on the board (and upgradeable to six), not to mention support for SO-DIMM memory and M.2 NVMe SSD.

Update: There were multiple components with very long lead times that must have contributed to the situation as mentioned on Ameridroid, but the list did not include the Celeron processor itself:

Some key components (PMIC, 2.5GbE NIC and audio codec chips) need over 35 weeks lead time even we placed order last October though.
….
We’ve recently received additional information that the lead time on some key components for the H2+ is now over 60 weeks….

There aren’t really any direct alternatives on the market with a similar budget and feature set. You could go with Arm-based 2.5GbE networking boards but they come with much less memory, Windows is not an option, and they don’t usually come with video output. Other options are mini PCs such as the ASRock NUC 1100 BOX Series mini PC also with two 2.5GbE ports, and a choice of Tiger Lake processor, which means it will also be more expensive, and as an industrial solution may be more challenging to purchase. AAEON PICO-TGU4 Pico-ITX SBC may be the closest to what ODROID-H2+ had to offer with pricing starting at $614 with 4GB DDR4 and a Core-i3 Tiger Lake processor, but to the surprise of no one, it’s also out of stock…

Via FanlessTech who also reports that Jasper Lake motherboards and mini PCs are either canceled or available in very limited quantities.

The form factor, ports, SO-DIMM, and price are… were very attractive.

Hopefully we see a successor with a better chip on board.

I have been using the Odroid H2+ as a server for over a year. One disadvantage is that ECC-Ram is missing. I knew that and accepted it.
But Realtek RTL8125B is bad. So I would have better bought a low-power normal x86_System with Intel_NIC. Will exchange the system for one sooner or later.

This. When you honestly calculate the cost and the pros and cons, you end up with a standard Mini/Micro-ITX board most of the time.

Another option that works really well is the RockPro64 with a dual port Intel NIC however you’re limited to 4Gb of RAM.

I doubt you will find any Mini/Micro ITX board with the same power footprint as H2 or H2+ and a comparable price. I looked them up in my country (Romania) or on Amazon/eBay and I am better off using H2 (anything remotely close in specs is extremely expensive). Using a NUC like system is not a solution for me because I cannot use native SATA ports. I am a little sad that I did not get H2+. I told them in the forums to work on a successor, even if it would have AMD x86 SoC with at least 2… Read more »

> I doubt you will find any Mini/Micro ITX board with the same power footprint as H2 or H2+ and a comparable price.

I did not move from USB 3.0 HDD so I can go back to using USB 3.0 for my NAS. It is already very expensive. For that money I can get a decent second hand desktop with decent wattage and use it instead. Or I can go the high route and use my current desktop if I can get it to use less power than it does when playing IF I can get a decent GPU these days. But until then fingers crossed for my H2 to keep functioning.

I still cannot get this device work reliably. It crashes my whole home network after getting some load. I already tried different RAM module and USB-Ethernet adapter instead of using built-in 2.5G Ethernet. Out of ideas now.

Did you try a fan? One of my H2s would lock up every few days. A low rpm fan blowing some air over the heat sink fixed that.

“Crashes my whole home network” reminds me of articles I read about some Ethernet adapters sending PAUSE frames, and switches (unfortunately) forwarding them. Might be worth opening up Wireshark and checking for this. http://jeffq.com/blog/the-ethernet-pause-frame/

Shortages and long lead times, as I have said before will get worse. World shortage of drivers, shipping containers stuck on ships and ships off shore unable to dock. Enjoy.

Thank you, just ordered the slightly slower N5100 variant for less than 190€.

You will get RTL8125B. 🙁
Poor performance and strange effects. But it also depends on the driver and the system.
Take a look at the corresponding threads in the Odroid forum.

On a 10 GBe Zyxel switches I got errors in the log that I have not seen before. I then installed a different OS, a different driver and sent the Zyxel back.

A strange feeling remains. Better Intel NIC. Even if that is significantly more expensive.

> Take a look at the corresponding threads in the Odroid forum.

Or is there something specific happening with recent kernels? If so I would appreciate a direct link to a helpful thread over there.

I am fully occupied with work right now. I have nevertheless looked in the forum but not directly found the various threads on the subject.
I remember that the current Realtek driver is supposed to be better than the Linux kernel driver, at least in terms of performance.

I currently use my Odroid with TrueNAS. Have included the Realtek driver by hand. Meanwhile, there is also a Tunable for TrueNAS (see their forum => but seems slower). Will probably soon switch to TrueNAS Scale = Linux.

Presumably the Windows drivers are best under Realtek?