A new official Raspberry Pi expansion board is introduced today. The Built HAT provides four connectors for LEGO Technic motors and sensors from the SPIKE Portfolio, as well as an 8V DC jack to power both the Raspberry Pi and LEGO motors, sensors, LED matrix, and more. 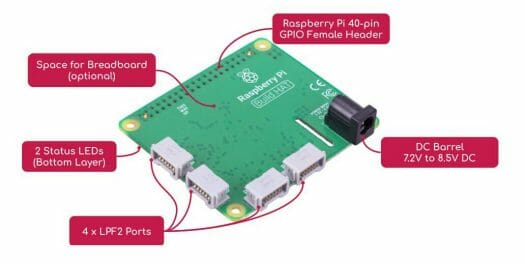 To get started with the Build HAT, you’ll need one of the supported Raspberry Pi boards, a microSD card with Raspberry Pi OS, a 48W (8V/6A) power supply, and compatible LEGO parts, for instance, the LEGO Education SPIKE Prime Set (PN: 45678) and SPIKE Prime Expansion Set v2 (PN: 45681). You could also use your own existing LEGO parts that are compatible with the LPF2 (LEGO Power
Functions version 2) connector.

You can obtain the Build Hat Python Library by upgrading your Raspberry Pi OS to the latest version or installing it from Github. You’ll also need to enable serial in rpi-config for the communication between the Raspberry Pi board and the Build Hat.

Programming looks quite straightforward with a “Hello Motor” sample in Python looking like:

The Raspberry Pi Build HAT can be purchased for $25 and up on the usual resellers such as Sparkfun (US),  Cytron (South East Asia), PiHut (UK), and others, while the 48W power supply is sold separately for $15. Additional information may also be found on the official product page.

The indentation on that python example is iffy – lines 2+3 shouldn’t be indented at all. /python pedant