The Goofoo Cube is a $99 3D printer that aims to be as easy to assemble as a LEGO kit, and designed for beginners who can print directly from their phone from a library of over 1000 pieces.

The compact 3D printer ships in a package barely larger than a shoebox, meaning it does not take much space on your desk but the build volume is rather small (80x80x80mm), supports PLA and PCL filaments, and can print small parts in about 30 minutes with a 0.7mm nozzle. 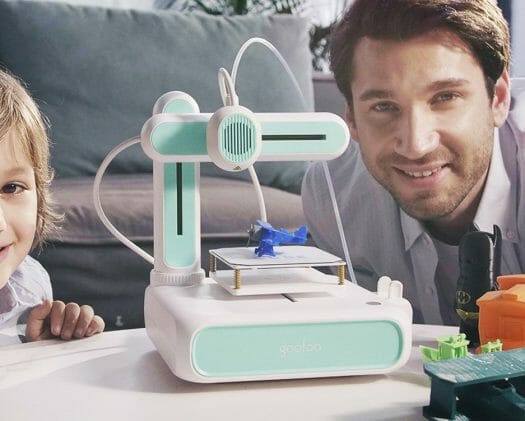 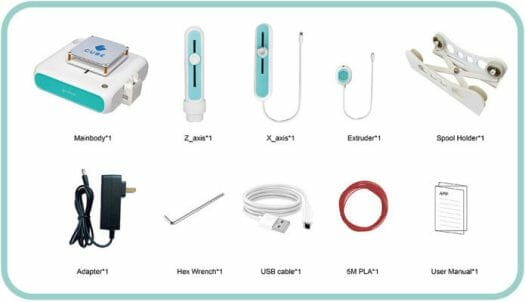 The 3D printer is comprised of five parts with the main body, Z and X-axis, an extruder, and a spool holder. The package also includes a power adapter, an Allen wrench, a USB cable, 5 meters of PLA filament, and a user manual. The CUBE app is one of the highlights of the 3D printer since it’s supposed to make printing really easy, at least for existing mode, since you can just browse the gallery before printing. The app is not available at this time, but the video below shows how to use the app in more detail.

The GooFoo Cube is available now for $99 and up on Indiegogo. There’s also a $105 pledge with 5 more filaments with different colors. Shipping adds $20 to the total, and deliveries are expected to start in December 2021, but I don’t expect to get it for Christmas. As a warning note, the failure rate of 3D printer crowdfunding campaigns is very high, and I’ve written about other $99 3D printers before with the OLO 3D printer (2016) and the BuildOne auto-leveling printer (2017), both on Kickstarter, getting angry comments from backers asking for refunds.

GooFoo is promising deliveries in December, meaning it’s already at the production stage, and the company manufactured several other 3D printers in the past, so maybe it’s different, but it’s still odd the app is not available yet being so close to deliveries. You may also be interested in the 3D Printing Professor’s take on the GooFoo Cube, as he recommends waiting until reviews are out unless you don’t mind risking $100.  If you’re in need of a cheap 3D printer by Christmas, he recommends the Easythreed K7 going for $79 on Aliexpress (be aware of shipping times) or $103 on Amazon, since he’s tested it and it works, albeit it won’t be as easy to use as the advertiser features of the Goofoo Cube.

I thought the date was 1 April when I read this.

Quite frankly, the idea might not be bad, but it’s ruined by this unwatchable video presentation, which uses selfie lovers’ stupid vertical orientation that is contrary to human sight which is horizontal. I couldn’t watch it more than 20s. Some people really need to learn the very basics of UI/UX.

Waste of money i think, better to spend a bite for to get somthing descent, 80x80x80 is realy to small, and it just looks like a toy