There are already plenty of NVIDIA Jetson-based camera solutions from carrier boards to IP67 rugged cameras, but Teledyne FLIR has decided to launch its own with the Quartet carrier board for the Jetson TX2 module.

The Quarter board is not designed to work with the thermal cameras the company is known for, but instead FLIR Blackfly S USB3 cameras designed for machine vision. Besides four TF38 USB 3.0 connectors, the carrier board also offers a SATA storage interface, HDMI video output, and extra USB Type-A ports for other peripherals. 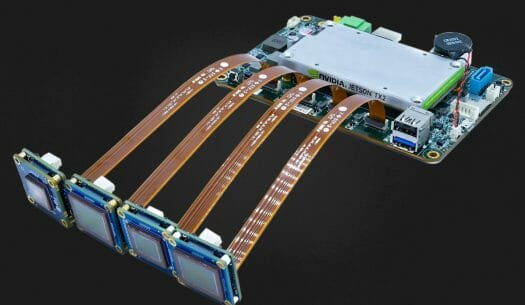 I’m not 100% sure what the Hirose TF38 connector brings over the typical USB Type-A connector, but considering the mention of a “robust lock design” I’d suspect much better resistance to shock and vibration. Anyway, that’s what FLIR uses for its BlackFly S USB3 cameras, and if you were to use those with a board equipped with typical USB Type-A ports, a USB 3.1 to TF38 USB hub is offered.

Teledyne FLIR sells the carrier board either barebone without module, or fitted with a Jetson TX2 module equipped with either 4GB or 8GB RAM, but do not provide pricing publicly, and instead, you’re being asked to “Request Info” after model selection.