We previously wrote about adding CAN Bus to Raspberry Pi Pico with CANpico expansion board. CANBed is a single board with a Raspberry Pi RP2040 microcontroller and a Microchip MCP2551 CAN receiver plus some extra I/Os that offers an alternative.

CANBed supports the CAN 2.0 and OBD-II protocols via either a DB9 connector or a 4-pin terminal block, offers two 4-pin Grove headers and an extra I/O header for expansion, as well as 9-28V power input. 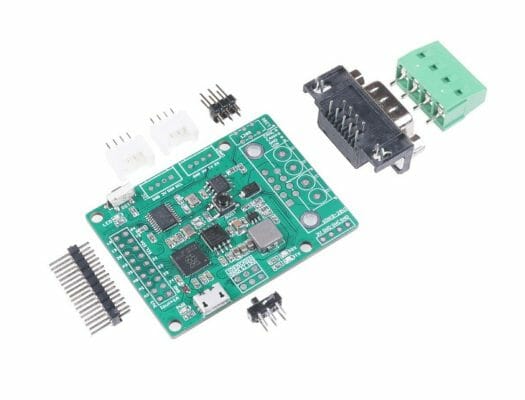 The board is programmable via the Arduino IDE using https://raw.githubusercontent.com/Longan-Labs/Longan-RP2040/main/package_rp2040_index.json Boards Manager URL as well as Longan Labs CAN Bus Library as explained in the Wiki for the board. The Wiki also says the board can be programmed with MicroPython but provides no samples, so it’s probably better to get started with Arduino.

The board appears to be sold as a kit with a DB9 connector, a 4-pin terminal block, two Grove connectors, some 2.54mm headers, and a switch for the 120Ω terminal resistor that the user can solder as he/she sees fit. I first found CANbed board on Seeed Studio where it is up for pre-order for $15.90, but you’ll also find it on Longan Store together with other CANbed boards equipped with Atmega32U4, SAMD21G18, or SAME51G19A microcontrollers, and even an upcoming CANBed Dual board with Raspberry Pi RP2040 supporting both CAN 2.0 and CAN FD that will be sold for $24.90.