I’m starting to better understand what Wi-Fi HaLow (aka 802.11ah) is for, after seeing a kit with two WiFI HaLow gateways used to wirelessly extend the range of Ethernet connected nodes on the LAN, including IP cameras, to several hundred meters, far more than your typical WiFi repeater, but at the cost of a lower bitrate.

Yesterday, I wrote about Halo TD-XPAH, the first easily procurable 802.11ah WiFi HaLow development board I had seen, since the introduction of the new standard in 2014. But I was told another lower-cost HaLow board had been available for a few months on Alibaba, and while I failed to find it on Aliexpress, I discovered a pack with two WiFi HaLow to Ethernet gateway that could easily help extend the range of WiFi nodes like security cameras and selling for about $65 shipped. 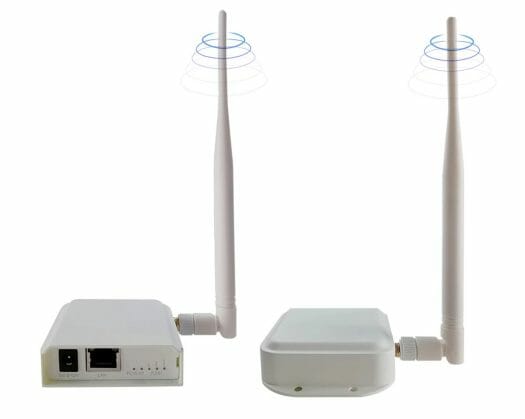 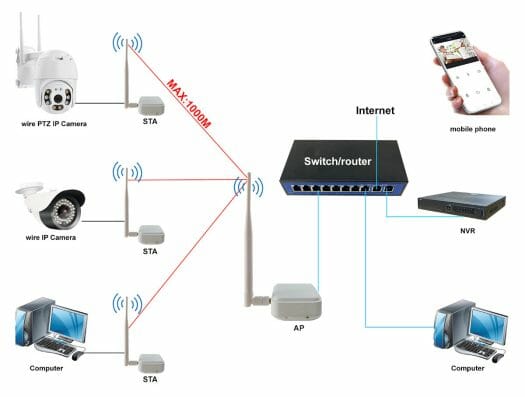 Unlike most WiFi routers running Linux distributions like OpenWrt, the HaLow gateway is likely based on a Newracom chip meaning Arm Cortex-M0/M3 microcontroller with firmware written in C language. The manufacturer, which should be Zhuhai Huge-ic Co.,Ltd according to FCC filings, also calls this type of system “Air Ethernet” since it adds wireless connectivity to Ethernet hosts like IP cameras, computers, or laptops. Note there’s no support for 2.4 GHz 802.11b/g/n WiFi at all, so this gateway only works with Ethernet. I understand each gateway can be configured as either an access point or a client (STA), and one access point can handle up to four clients.

The 900 MHz frequency band used by the 802.11ah enables both longer range and penetration through obstacles like walls. I’d assume there must be a web configuration interface to select the 760-790MHz (e.g. China) or 902-930MHz (e.g. US, South East Asia) band to comply with local regulation. While it’s possible to get a connection of over 1km, the bandwidth may not be sufficient to transmit video. Another way to look at the range is a video from Newracom with another device equipped with their NRC7292 chip showing low-bitrate video transmission of up to 500-600 meters, and still getting a ping up to nearly 1.5 km away, all without large obstacles such as buildings.

760-790 MHz is not for Europe but for China. Europe uses the (very tiny and limited) 868 MHz band. Also only countries in the Americas (not all of them) allow full use of the 902-928 MHz band. Japan, Malaysia, Singapore, Brunei, Cambodia, Hong Kong, Indonesia, Laos, Taiwan, Thailand, Vietnam only allow a small subset (not the same one, of course!). “Bandwidth allocation – 1Mbps, 2Mbps, 4Mbps, or 8Mbps” is most probably channel bandwidth in MHz rather than Mbps. 1 MHz at MCS 10 is the one providing the longest range (but slowest data rate: 170 kbps at best, definitely not… Read more »

Thank you. I’ve updated the post based on your comment.
It looks like support for Europe is being worked on with the 863 – 868 MHz ISM band.
https://www.emcc.de/services/standards/ieee-80211ah/
Silex is preparing a module for it: https://www.silextechnology.com/unwired/802.11ah-faq

I’ve just been informed that 802.11ah may be extended to 400 MHz with slightly lower speed, and much higher range.

I still can’t find any information on power consumption or packet latency.

There’s a long and detailed analysis of performance of 802.11ah here: https://www.ncbi.nlm.nih.gov/pmc/articles/PMC5854999/ Haven’t seen much about power consumption but I doubt it’s in any way comparable to LoRaWAN and the like so it’s unlikely to be useful for long-life battery-powered applications.

Power consumption is generally better than LoRaWAN due to much faster data rate – allowing devices to sleep longer. This lets you move more bits of data per Joule of energy. Target wake time (TWT) means the device has no need wake up for beacons like traditional Wi-Fi. Sleep current and transmit current are the two main sources of power draws. 5 to 10year battery life can be expected: https://www.ncbi.nlm.nih.gov/pmc/articles/PMC6603570/

Cheaper on Amazon, weirdly enough. Note that the Aliexpress listing says you have to ask the seller to configure them, like if you want to get 4 units and have 3 clients talk to one base; by default each pair just talks to each other. Maybe there’s a way to do that config yourself but they don’t advertise it. I’ve asked and will try to remember to post back if they respond.

I have a different model purchased from AliExpress, a very outdoor looking package. When you open them up you can switch between AP and STN mode with a small switch.

I am using it to connect two houses over about 600m in a mountainous area. I get about 9-14Mbps but it’s been a struggle, I am using a cheap UHF TV antenna on one end to make it more stable. It’s doing far better than any of the more traditional WiFi systems I have tried (including Ubiquiti!).

Hi Thanks for your info, do you have its Link, i need to buy Halow like yours , Thanks so much

Weird that they are trying to spin running their own custom firmware instead of OpenWrt as a positive, rather than the negative that it is.

What happens if the company goes out of business or no longer wants to support the firmware on the “old” models from n years ago? with no security updates does that mean these just become e-waste?

Companies that use OpenWrt (or other open source systems) are saying that even if we go out of business our product will remain useful and secure, and you won’t have wasted your money.

These things are terrible. I found a pair on Amazon and wrote a fairly detailed review: https://www.amazon.com/gp/customer-reviews/R2OY2YYNJ3WW4H/ There’s no config interface at all that I’ve found, certainly no web interface; the units don’t even get IP addresses, they’re just transparent bridges, preconfigured to pair to each other by MAC. No security that I’ve found, so as other 802.11ah devices proliferate, I expect these to be gaping holes into the networks of whoever’s installed them. There’s a console port on the PCB which produces some bootup scroll, but doesn’t appear to present a config interface. There’s a “Pair” button on the… Read more »