Pine64’s PinePhone Pro “Explorer Edition”, the successor of the PinePhone Linux smartphone with a much more powerful Rockchip RK3399S processor, is now available for pre-order for $399 on Pine64 store, but mostly for Linux developers since there’s still a lot of work to do before the phone becomes usable.

Based on Allwinner A64 processor, the original PinePhone was the cheapest Linux smartphone you could get, but as a user, I can also say it’s sluggish and suspect only a few people have made it their main mobile device. The story should be a different story with PinePhone Pro with much better specs include on hexa-core Cortex-A72/A55 processor tweaked to consume less power than RK3399, 4GB RAM, 128 GB eMMC flash, and a 6-inch display that makes it more like a typical entry-level/mid-range smartphone. 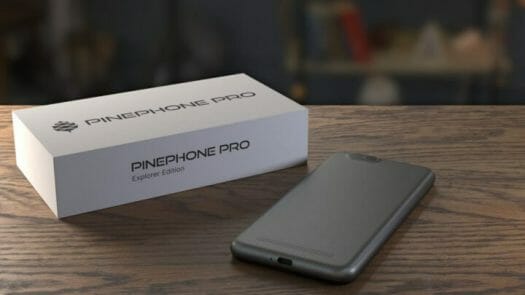 The phone will ship with a pre-beta build of Manjaro with Plasma Mobile, a USB-A to USB-C charging cable, and a Quick Start User Manual. More technical details can be found in the Wiki. Besides Manjaro Linux, other operating systems being worked on are Arch Linux Arm, LuneOS, Mobian, and NixOS whose early images you can find in another section of the wiki. Convergence mode should work more smoothly as well, so it could be a mobile Linux PC as well by connecting the USB-C port to a USB-C dock.

The specs are not that far from the Huawei Y9 Prime 2019 that I bought for around $200 two years ago. That’s quite a difference in price, and probably the cost of small volume production (Pine64 says it’s a large production run, but I don’t expect it to be in the millions), a selection of components with open-source software, extra features like removable battery and privacy switches, as well as possibly the extra cost of components due to the current supply issues.

Developers who pre-order the phone before January 18th should get it shipped before the end of the month, while after that date shipments are expected at the end of February 2022, or after Chinese New Year festivities.

If I had known this was coming I would have bought this instead of my pinephone regular. That thing is pretty slow when docked and running a Web browser.