We’ve seen a fair amount of Jasper Lake mini PCs, and even reviewed one with Beelink U59. MOREFINE M6 stands out due to its size and thickness, being about the size of two smartphones stacked together.

The features are also promising with an Intel Celeron N5105 quad-core processor coupled with up to 16 GB RAM, up to 1TB M.2 NVMe SSD, as well as dual 4K video output through HDMI and USB-C ports, a 2.5GbE ports WiFi 6 & Bluetooth 5.2 connectivity, and three USB 3.1 ports. 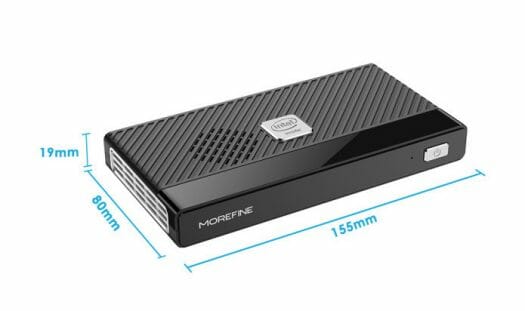 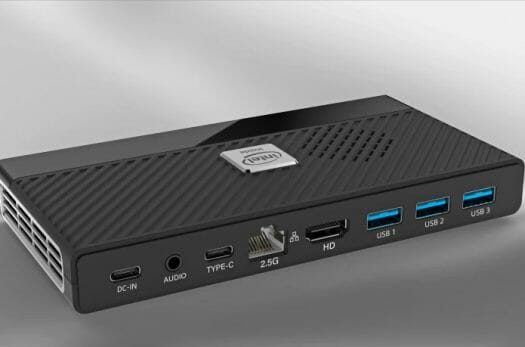 The M6 mini PC ships with an HDMI cable, a 12V/2A USB Type-C charger, a VESA mount with 8 screws, and a user’s manual. Note that while the specifications read (USB PD: 30W), it’s probably using one of those non-compliant 12V power adapters with a USB-C plug. I understand Windows 11 is pre-loaded on the machine, but Linux distributions like Ubuntu 20.04 are also supported.

The specifications are quite similar, although slightly better, than the ZX01 palm-sized mini PC which packs the features in a 72x72x45mm enclosure. So you have the choice whether you value thickness or area on the desk. ZX01 comes with two HDMI ports which may be convenient, but MOREFINE M6 offers better networking options with 2.5GbE and WiFi 6, and also supports the more common M.2 2280 SSDs.

MOREFINE says those pledges are all 30% cheaper than the retail price after the crowdfunding campaign. Worldwide shipping appears to be included in the price, and deliveries are scheduled to start in April 2022.

Active cooling fan inside: not noiseless.

According to a short review on YT: ‘fan a little noisy’ (‘fortunately’ noise being one of the most subjective impressions 😉 )

This review points out the brick being able to be powered by QC compliant power banks (12V) so ‘laptop without a display’ is amongst possible use cases. And it contradicts some info here (versions without 2.5GbE seem to exist and the M.2 2280 slot being empty at least when choosing the 256GB variant).

Depends on your use case, and if second hand goods is no problem for you; you can get much more performance with used mini-pc from dell (optiplex), hp (prodesk, elitedesk), lenovo (thinkcentre) albeit with much higher TDP (~35W). But just undervolt and underclock it. NUC 11i3 is about < $300 barebone BTW.

Ding, ding, ding — we have a winner in at least on respect, the ports layout.

The mini cube layouts offer an illusion of compactness. But with ports on the sides and front, these create an ugly “hydra” cable mess that consumes about as much overall space as this one does with all the ports on the back. But apparently, people don’t think about this until after the purchase.

Bingo….these guys got it right.

I watched part of that review yesterday, but when I saw he tested networking with speedtest,.. I stopped. He also mentions the 12V power adapter with USB-C is a good idea because we can use other adapters with USB-C…

Good spec but still way overpriced for what it is.

An ultra-thin ? You think people are crazy in noisy thin technology?I am not interest in any fan cooled devices for any money. Even if I could get it for free. No, thanks.