The processor supports LPDDR4x memory, UFS and eMMC storage, up to three displays, for example, the main display plus two external HDMI displays, WiFI 6/6E, and offers high-performance interfaces such as PCIe Gen 3 and USB 3.2 Gen 1. 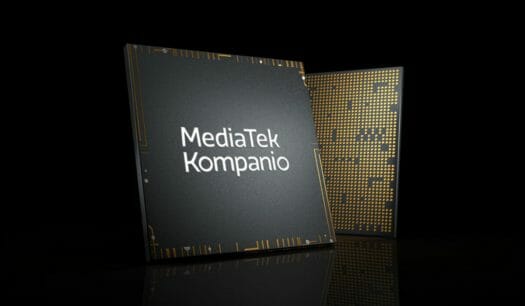 The Kompanio 1380 looks somewhat similar to the Kompanio 1300T processor announced last July for tablets, but without a 5G cellular modem, a mid-range Arm Mali GPU instead of a higher-end Mali-G77 MC9,  support for slightly low-resolution camera, and no mention of MediaTek HyperEngine 3.0 for gaming. Since it will support ChromeOS, running Linux might not be too difficult, but I would not expect a single board computer based on this processor, although it would be fun.

More details may be found in the press release and on the product page.

That’s about all the performance you would need in a Chromebook SoC. Faster than RK3588, hitting up to 3 GHz.

Display capabilities appear to be massively improved over previous SoCs. For example, the MT8183 only supported 2400×1080 according to Notebookcheck.

MT8192 will be the cheaper version with Cortex-A76 and other cutbacks. MediaTek claims that both chips support AV1 decode in one of its press releases, but the actual page for it doesn’t list AV1 decode.

That’s about all the performance you would need in a Chromebook SoC. Faster than RK3588, hitting up to 3 GHz.

Display capabilities appear to be massively improved over previous SoCs. For example, the MT8183 only supported 2400×1080 according to Notebookcheck.

MT8192 will be the cheaper version with Cortex-A76 and other cutbacks. MediaTek claims that both chips support AV1 decode in one of its press releases, but the actual page for it doesn’t list AV1 decode…

PCIe Gen 3: how many lanes?

Product page does not say 🙁

x4 for an NVMe drive, maybe?

Maybe looking at the Acer Chromebook Spin 513 (CP513–2H) can yield a clue, but I don’t see anything too illuminating in the Jan. 3 press release.

With PCIe it could make a nice general purpose SoC (assuming it would get mainline adoption, of course).

Oh wait. It won’t have enough RAM to do a final link of the chromium binary. Oops.

﻿<sarcasm>Oh well… I guess that self-hosted OS development just isn’t important. After all, no successful OS was developed self-hosted…</sarcasm>

Because they are the low-power cores. They’re quite efficient, and trying to push their frequency further would bring little benefit for a significant consumption. Better make sure they work fine without taking on the A78’s power envelope.

A SBC would be such a dream for many people but the industry isn’t going to make the things that easy. There will be always 2 sides for SBC, the ones that are super cheap low-to-reasonable performance and the ones super expensive high-performance, and with super expensive I mean 50-100% more expensive than a phone with that SoC, hilarious.

In some cases you could use a phone itself and a dock to make it do the job of an SBC.

In fact high-power Arm has difficulties to spread because high-power SBCs are much more expensive than the equivalent x86 ones, which also have the benefit of working out of the box instead of waiting 8 years for them to start showing a console.

Big-name manufacturer usually unable to have a rational thinking related to high performance Arm SoC (brain malfunctioning?). Surface with Arm for example, < $100 SoC with a whooping $1499 price when launch! It’s as if they want their product to fail. With these pricing, we can get business class x86 laptop with more perf (although, less battery endurance).