KrakenRF KrakenSDR is a software-defined radio (SDR) with five coherently-operated receive channels that’s basically the equivalent of five cheap RTL-SDR USB dongles based on the R820T2 chip with a single board housed in a metal enclosure equipped with five custom antennas.

KrakenSDR operates in the usual 24 MHz to 1766 MHz tuning range and connects over USB to the host system, preferably a Raspberry Pi4 as the open-source Core DAQ and DSP software is designed for the popular single board computer. There’s also an Android for location finding that is free to use for non-commercial applications. 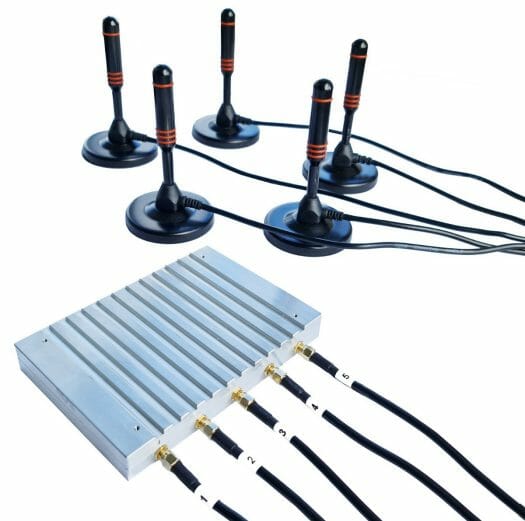 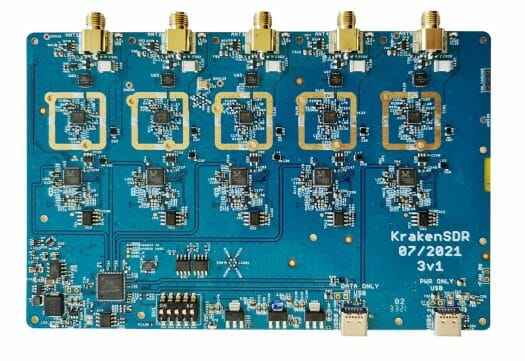 You’ll send need an antenna set, a USB Type-C cable, a Raspberry Pi 4 or another host for data acquisition and signal processing, and a 5V/2.4A+ power adapter to complete the setup. The processed data is then typically transmitted over Ethernet or WiFi to another computer or Android smartphone for visualization.

The DAQ software is used to ingest RF data from all five antenna inputs, automatically calibrate and achieve phase coherence via the switches and noise source, and provide coherent samples for the DSP code which supports direction finding and passive radar. Both can run on a Raspberry Pi 4 or a PC, but the passive radar is more computationally intensive and may benefit from running on a more powerful machine.

The KrakenSDR software also comes with a web interface for setting up a direction-finding system, notably adjusting the frequency, gains, and other advanced settings related to the DAQ code. The interface also features a live-spectrum view and graphs of output from the direction-finding algorithm.

Some of KrakenSDR use cases include:

Here’s a demo of the system in action with a car fitted with five antennas driving around to locate a transmitter while providing navigation instructions.

KrakenRF says a typical direction-finding system can be really expensive taking Rhode & Schwarz DDF007 / PR200 as an example with the price claimed to be around $150,000.

The DAQ firmware and direction-finding DSP code can be found on GitHub, while the Android app will be offered for $50 on Google Play, but backers from Crowd Supply will get a free license.

The crowdfunding campaign ended last November, but KrakenSDR is still available for pre-order on Crowd Supply for $299, while the five magnet-mounted antennas add another $99. Shipping costs $8 to the US, and $18 to the rest of the world. The antenna set should ship by Mar 31, 2022, while the KrakenSDR is expected by the end of September 2022.