Avnet has just released a survey of global engineers asking them how they were coping with the global chip shortage, longer lead times, and the impact on product design. Note that most of the 530 respondents are from EMEA (56%), and the US (31%), while only 10% are in Asia, and 2% are in Japan (I understand Asia means ex-Japan here), so it may not perfectly reflect the global situation, but the results are interesting nonetheless.

If times have been challenging for your company/project, know that you are not alone, and 98% percent of respondents have had troubles accessing parts, 93% has experienced longer lead times, 73% of the survey respondents say the chip shortage presents a significant challenge, and 64% are now selecting parts based on availability rather than preference. 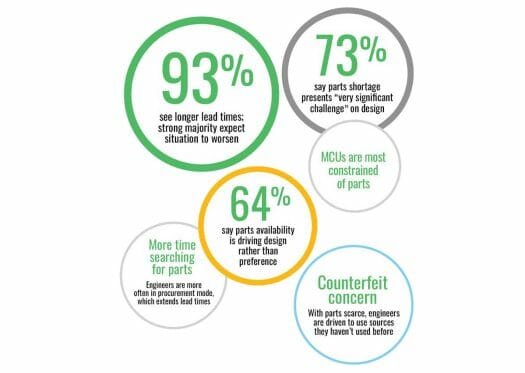 Microcontrollers are the most challenging part to get hold of (think STM32), which has led to an increase in counterfeits since more components are purchased from alternative sources, and additional time is being spent searching for parts. The situation has not only impacted procurement engineers and manufacturing, with 55% of hardware engineers having to redesign their boards, while 53% were lucky enough to find pin-to-pin replacements either fully compatible or with betters or lower specs. Changing hardware often means firmware engineers and software engineers are getting involved and 35% of respondents say firmware had to be changed, while 24% had to modify the software. So engineers are just not sitting idly because of the shortage of components… 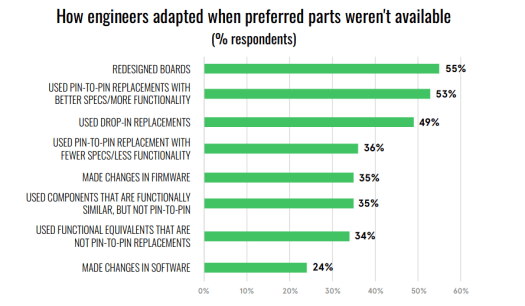 A plurality of projects (49%) had delays of three to six months due to the chip shortage, but only some (5%) were delayed by over a year. Most respondents expect things to get worse with 85% thinking that lead times will continue to increase, and 81% expecting higher prices over the next 18 months. So the future is looking pretty bleak unless recency bias plays a role here.

You’ll find more details in the 12-page survey available on the Avnet website. Free registration is required, but if you don’t want to be contacted by the company later on, you can use an invalid email to access the download.