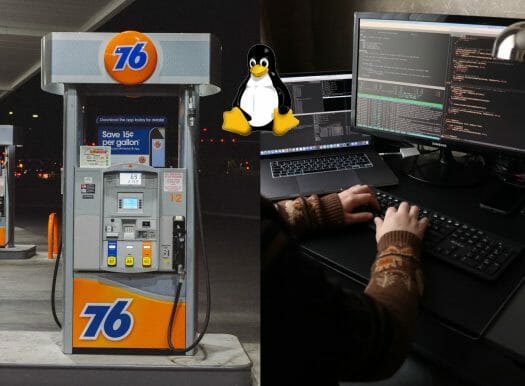 Around 400 gallons of gas were stolen from a gas station a few days ago by using a special remote to put it in “dispense mode” and get the gasoline for free. It is not an isolated incident and over the years gas pumps have been hacked using different methods, with some running embedded Linux and connected to the Internet just like a router.

Gas pumps have a lot more in common with routers than I initially thought, as reported by FOX 8, many models come with a default passcode that may not always be changed by the gas station’s manager, and using a special remote it’s possible to change the price and other parameters. Some gas stations are also part of the Internet of Things with all gas pumps connected to the Cloud through gateways (called “embedded box” below) to enable remote monitoring, but that also introduces security vulnerabilities as noted in a Kaspersky study in 2018. 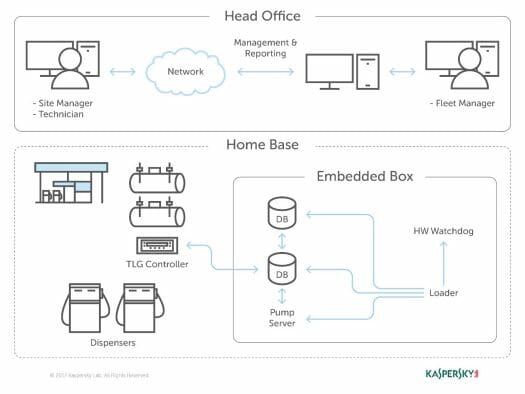 They noticed an embedded box running a Linux with a tiny httpd server, and responsible for managing every component of the station, including dispensers, payment terminals, and more. That embedded box was connected to the Internet, and searching for a specific string on service like Shodan would locate over 1,000 embedded boxes installed over the world. At the time of the study, Kaspersky said around 29% of gas stations in India, and 27% in the US were connected to the Internet.

The user manuals from the manufacturer of the embedded box included screenshots, default credentials, different commands, and a step-by-step guide on how to access and manage each of the interfaces, and it did not require a skilled hacker to access the dashboard. Kaspersky “understood how obsolete the device was when we realized it was operative and accessible remotely using services you don’t expect to see in modern devices”, so I’d assume the HTTP (80) and telnet (23) ports were opened… 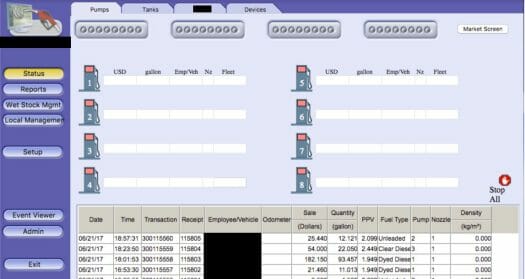 Once you have access to the dashboard you could potentially do some “fun things”:

Further investigation of the firmware also revealed hardcoded username and password, as well as insecure code allowing remote code execution. Those vulnerabilities were fixed four years ago, but it remains to be seen if all affected embedded boxes (gateways) were updated.

Just an interesting and harmless experiment. Looking for “gas station” on Shodan, reveals some gas stations with a monitoring system from Veeder. It’s quite easy to check the tank inventory using telnet. and sending “Ctrl A + I20100” command.

There’s a 6-year old article on the subject here, which shows that basically nothing changed since and nothing will change in the foreseeable future: https://www.rapid7.com/blog/post/2015/11/18/the-internet-of-gas-station-tank-gauges-take-2/

It would be nice if at least the station’s manager could lock such devices down to prevent unauthorized access. But sadly the internet has become a commodity like air, and some consider that they’re free to use it and pollute it.

Personally, IANAL, I wouldn’t upload screenshots of me accessing a system that I didn’t have permission to access even if it isn’t secured properly. Pretty sure that’s no go in a lot of places.

It could be. But that data is also available from Shodan. That website is regularly probing and accessing millions of devices like in that screenshot. I’ll delete it any way.

“fun things” = Cause fuel leakage and risk of casualties? 🙁

To make it clear, the ones involving affecting other people aren’t funny at all, the rest, yeah.

Pretty clear from the context that the term was used sarcastically.

I don’t think he literally meant that was fun but was more using it as a combination of sarcasm and hyperbole to give us the impression that we can do just about anything to these pumps. Definitely agree it’s not “fun”, but it’s very very interesting that just about anyone could have the ability 🤷‍♂️

Fuel prices are going up – but not for cnx software readers…

“Insecure”?…..they feel bad about themselves? Socially awkward? I think it should be “unsecure”.

Interesting to see things like an “odometer” field on that dashboard.