Soon after writing about RoenDi rotary encoder with a built-in color display, readers pointed me to SmartKnob View, a similar-looking project but featuring an ESP32 module for WiFi and Bluetooth connectivity, plus software-configurable end-stops and virtual detents.

The latter is enabled through a brushless gimbal motor paired with a magnetic encoder to provide closed-loop torque feedback control. Just like RoenDi, SmartKnob View comes with a 240×240 round color display but adds tactile feedback so you can change the menu when pressing the display. 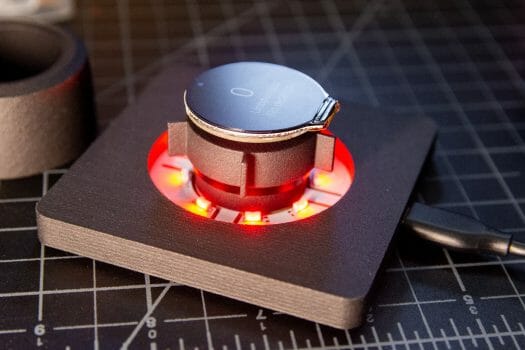 Note it’s currently a work-in-progress project, and not recommended for general use with mechanical and electrical revisions planned. Yet the initial prototype appears to be working pretty well, and the demo is rather cool.

The project is open-source hardware with the design files, Arduino firmware, and instructions available on Github. You’d think this type of niche hardware would only attract a small community of users, but the YouTube video above got over 300k views, plus at least 100k more on Twitter. The popularity of the project may have even caused the recommended motors to go out of stock, and there may not even be further production. There’s currently an open issue on Github to look for replacements, and the PCB design and 3D printed part may change as a result.