Rockchip RK3588S processor, a cost-down version of Rockchip RK3588 SoC with fewer interfaces, has made its way into Firefly ROC-RK3588S-PC SBC (single board computer) about the size of a credit card and equipped with up to 32GB RAM. 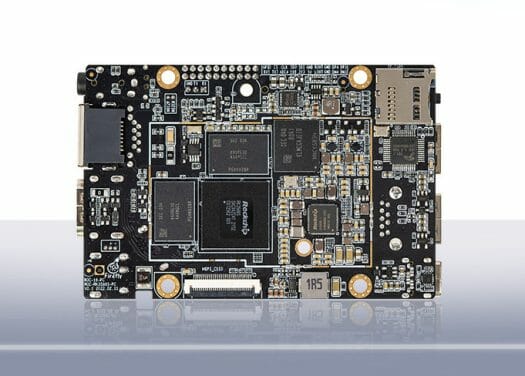 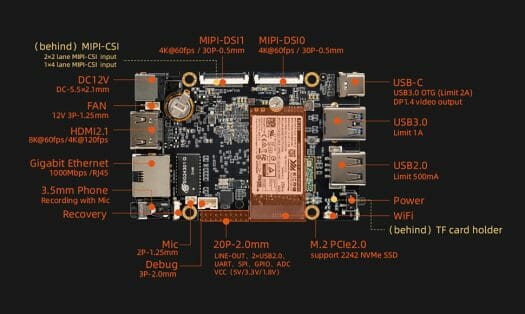 Software support is the same as for its more expensive big brother, the ITX3358J mini-ITX motherboard, with Android 12.0, Ubuntu Desktop, Ubuntu Server, Debian 11, Buildroot, RTLinux, Kylin Linux, UOS, and others, thanks in part to UEFI boot support.

ROC-RK3588S-PC board should be particularly interesting to people wanting to leverage the higher performance of the Cortex-A76/A55 processor, Arm Mali-G610 GPU, and/or 6 TOPS AI accelerator without paying the premium asked for full-featured Rockchip RK3588 boards. It may not meet the requirements of people wanting high-speed NVMe storage since the RK3588S processor does without the 4-lane PCIe 3.0 found on RK3588, and instead, the board has to fall back to a PCIe 2.0/2.1 interface up to 5 Gbps.

Nice board layout. Hope the price is sane. And easy way to obtain case.

OOT: Heard that Tom Cubie will send the Rock5 to TKaiser. Curious about that too and when Rock5 launch date.

There are already real life tests, reviews of RK3588 online. Some people expect a lot.

for over 10 days now. So not sure what you’re expecting special.

I like the idea of putting USB2 on headers. They take a lot less board area, can be placed anywhere, and the jacks to go with them have been around as a standard, cheap PC accessory for decades. The USB3 header is too big to use for the same purpose, so I don’ t miss not seeing that. But putting USB2.0 on headers is a direction I’d like to see SBCs head. That along with better power input (4.5V to 20V input with a barrel jack of standard dimentions of 5.5×2.5mm) are things that would make SBCs a lot more… Read more »

when I try to buy there isn’t option to choose quantity and type of ram.

Welcome to ‘technical documentation’ in the Android e-waste world. The term ‘LPDDR4/LPDDR4x/LPDDR5’ is still just copy&paste from the SoC’s docs but based on actual pricing maybe they add an ‘I’m extra stupid’ checkbox and then you can acquire that board with 8GB LPDDR5 for 600 bucks?

If actually only $99 then that’s nice…

Wait for ROCK 5A then.

When thinking of I/O RK3588S is already such a joke. But then exposing the only Gen2 PCIe lane in a M.2 slot limited to 42 mm length is even more amusing. Good luck finding a 2242 NVMe SSD 🙂

And of course at least two USB Hi-Speed ports are behind an internal USB hub.

Really wondering about potential use cases… some Android thingy dedicated to surveillance?

I needed a 2242 NVMe SSD recently. It appears only 5 models have been made. The only one you can actually buy is here: https://fave.co/3uVZ7hC

How does the joke go?

The castrated I/O capabilities of RK3588S are one good joke since what remains after removing all of this? ‘CPU horsepower’? The SoC’s surveillance capabilities?

And speaking of SBC it’s really amusing how Firefly struggles with M.2 since half a decade. On their RK3399 board they advertised SATA capabilities while the M.2 slot carried only PCIe lanes and had the wrong keying (B instead of M). And now this premium priced thingy here ensuring only crappy SSDs can be inserted.

Looks like Sabrent has some in 1T and 2T for a little bit of a premium. They’re a legit company.

Sabrent has three M.2 2242 NVMe SSDs but at least in my country only the 512GB model can be purchased through a reputable local source (with a ‘no questions asked’ return/refund policy). The larger models you only get by ‘importing’ them through supporting Jeff Bezos.

Do you have NewEgg there? That’s where I saw them listed.

I think that this nice form factor will allow it to adopt the same enclosure as the Station-M2 one, which is excellent for a bring-everywhere device as well as one you can stick under a shelf or against another machine. And it doesn’t have the SPI NOR so it should hopefully not present the same issues with rockchip’s broken flashing tools that love to brick your device whenever they can. I like it, but I’ll probably like it better when it really starts to support mainline.

Indeed, the kernel and software support in general is pretty awful in these RPi pirate boards. Sure 32 GB RAM and 128GB Flash sounds like a lot, but expect similar specs from RPi 5. The M.2 compatibility in RPi allows installing even 8 TB SSD drives.

RPi 5? Is that some vaporware or dreamware?

Ah you didn’t know Jerry ? He’s our mascot here, always bringing the marketing words from RPi Trading here for our greatest pleasure. We’re always impatient to read his expert analysis whenever the word “Pi” appears on a product. There’s often some confusion of course because the subject is vast and extremely complex, and that gives us memorable laughs 🙂

Is USB boot finally working out of the box?

Don’t act like Raspberry foundation is somehow an examplar of support.

> but expect similar specs from RPi 5

I suspect that this is what we will see in TV boxes and handheld gaming consoles.

Whilst 2242 NVME might not be in every dealers stock, basic 2242 SSD’s are readily available and the option to add some form of mass storage to the board might be enough for many because the raw power of the SOC is one of the key selling points.

So I would guess that under $100 would be the likely price point.

‘Basic’ as in ‘SATA’? When ignoring this Kingspec/Kingdian crap you’ll get almost 30 SATA 2242 SSDs. When looking for NMVe there’s only a few 2242 from Sabrent, WD and Samsung (only OEM so good luck with warranty) and based on availability all of them seem to be discontinued.

Maybe SATA SSDs could work since the M.2 slot is behind a Combo PIPE PHY capable of both PCIe and SATA but no idea whether Firefly implemented a simple switch in software or not.

I’ve edited the post to add the pricing information, I was quite off with my $99 target.

Ouch! Finally the RK3568 is nice, and for performance x86 is way cheaper.

Ouch indeed. I don’t know how they would hope to compete with Radxa and yes, X86 would likely be a more desirable option at the price.

Hah, the price has been edited.

So I’ll say it again: Not competitive with Jasper Lake based mini-PCs.

If you can tolerate intel backdoor inside, feel free to get into the ‘free candy’ van.

Do you prefer Chinese backdoors?

As long as you don’t know how to exploit these backdoors, I will probably not care. Others could be concerned to have a lower-level OS running inside the various chips used in RPi, to regulate I/Os and possibly access your data as well. And what about all these SoCs with cortex M0/M4 inside ? When your OS is not running on it, do you know what runs there, what it does, and if you have your say on its actions ? All of this is pretty similar just presented differently depending on whether you’re a chip vendor or a buyer… Read more »

> And what about all these SoCs with cortex M0/M4 inside?

Or in other words: (almost) all SoCs since at least one such MCU or special core that usually sets up the hardware is present (almost) everywhere…

The only ‘great’ exception I’m aware of are older Allwinner SoCs where everything is open sourced. And while there is an OpenRISC core usually running a firmware BLOB this thing is not needed but now can be used with an open source firmware as well.

> If you can tolerate intel backdoor

You’re only able to tolerate something you are aware of. Do you believe RPi users willingly tolerate the ‘BroadCom backdoor’ inside every SoC slapped on these Raspberries? An RTOS called ThreadX having full control over the hardware running on the VideoCore while a guest OS like Linux has not even a clue at which clockspeed the ARM cores run?

Fun fact: prior to Intel switching to Minix for their ‘backdoor’ they also used ThreadX.

Any device that by design you only know the instructions they tell you about, owns you.

Companies are usually going for the manufacturing process node that matches best the cores used or target applications. RK3566/RK3568 processor is using low-cost, power-efficient Cortex-A55 cores, and switching to 8nm may not yield that much power saving, but ramp up the cost exceedingly.

When I was a student (25 years ago), there were huge constraints on power delivery, clock propagation, and fan-out, all of which were directly affected by the target process and were forcing to make some compromises. For example, you might be forced to arrange your register bank as a square around some ALU parts, and that arrangement might not be optimal for other units, forcing some delays that directly cap the maximum frequency. Similarly, certain processes limiting the fan-out could require to chain an extra buffer here and there and thus add some delays on already long paths. And I… Read more »

Indeed. I’m not surprised to see a push for ML being applied to layout. It’s a very complex problem. You provide a good example of why going to a more advanced process may not improve clock speeds. Sometimes you can’t get things off the critical popogation path. Speeding up the transistors doesn’t increase the speed of light. That’s an architecture problem, not an implementation one. I remember when the first Alpha chip came out, DEC set a record for the current pulses clock transitions used. The clock tree wasn’t a tree, but one huge (really wide) transistos that snaked throughout… Read more »

ok but 22 is almost 3 times bigger! I’d like some benchmarks about the efficency…

These are just numbers. And the times the ‘process node’ had something to do with the transistor’s ‘gate size’ are long gone.

Try to educate yourself: https://en.wikichip.org/wiki/technology_node and searching for ‘process node marketing bs’ should already be sufficient to get the idea.