When Sipeed first introduced the Lichee RV module with Allwinner D1 RISC-V SoC last November, they also teased the Lichee RV-86, an “86 Box” with a 4-inch 480×480 touchscreen display, an XR829 WiFi and Bluetooth module, Ethernet (via USB), two microphones, a GPIO header, and support for WAFT (WebAssembly Framework for Things).

I’ve just noticed the Lichee RV-86 has been for sale for several months, so it may be interesting to have a closer look, and now there’s also an option to get a 720×720 touchscreen display. 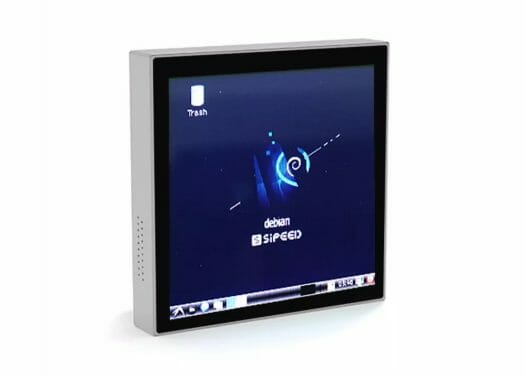 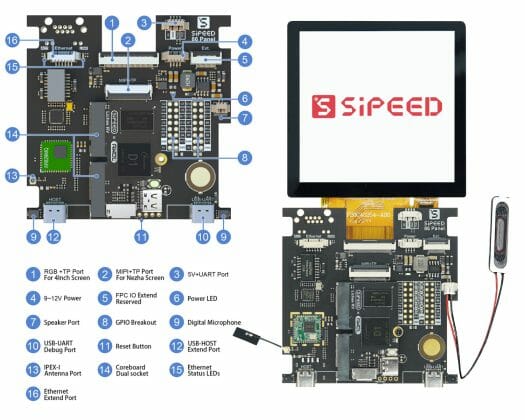 The Lichee RV-86 panel supports Tina Linux (based on OpenWrt 14.4) and Debian, and Sipeed offers a docker development image with an “original SDK”. Documentation is a bit all over the place with the documentation website, OS and tools downloads on MEGA, and datasheets, 3D files, schematics, and other documents in a separate location on Sipeed website. The system would typically be used as a Smart Home control unit, but it can also be used for Alibaba’s WAFT (WebAssembly Framework For Things) evaluation.

eth connector is in the cable (the cable usully used in IPC board, include power and eth lines)

Oh! I see now. I missed there was a cable similar to the one used in IP cameras.

Would have been nice if it supported PoE. Now it seems to be one connector for rj45 and one USB for power in the same cable.

I’d buy a few of these if they had POE!

It’s the same with doorbells, yet to see any reasonably priced doorbell with POE. It’s all WIFI which never works well with doorbells.

Maybe the next version!

Does anyone know a source for such LCD screens, no need for the electronics/SBC neither touchscreen

Buydisplay have IPS LCDs around that size, though not square.

Thanks not exactly what I was looking for but nevertheless a good source for many types of displays!

Is the XR829 wifi chipset related to the horrendously buggy XR819 found in Orange Pi et al.? Just seeing the name gave me unpleasant flashbacks of trying to get it to work. I hope it’s not nearly as bad…

2 microphone?
is possible run on this mycroft assistent? open source?