In another case of “Arm or RISC-V? Why not both“, ARIES Embedded has introduced “MSRZG2UL” and “MSRZFive” OSM compliant system-in-packages (SIPs) based on respectively Renesas RZ/G2UL Arm Cortex-A55/Cortex-M33 and RZ/Five AX45MP RISC-V microprocessors and designed for industrial controllers, IoT devices, and embedded systems with a basic GUI.

Both solder-on modules come in the OSM Size S form factor (30x30mm), 512MB to 4GB of DDR4 RAM, a 4GB eMMC NAND flash, various interfaces including Gigabit Ethernet and CAN-FD, and are available in either commercial (-0°C to +70°C) or industrial (-40°C to +85°C) temperature ranges. 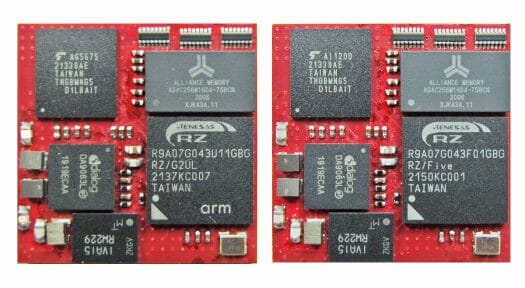 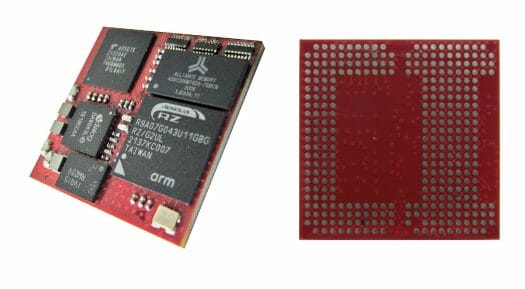 Renesas RZ/G2UL and RZ/Five microprocessors are pin-to-pin compatible, so the PCB should be the same for both modules. An important difference is that the RISC-V microprocessor lacks display/camera interfaces. ARIES Embedded did not mention anything about software, but we know that both Renesas Arm and RISC-V microprocessors support the Civil Infrastructure Platform (CIP) Linux designed for industrial applications with over 10 years of support. The company has also been incorporated into Renesas’ Preferred Partner Program, so they work in close collaboration with the Japanese silicon vendor.

The MSRZG2UL and MSRZFive SiPs will be available as samples from Q3 2022, while mass production will start in Q4 2022. ARIES Embedded will also present the new system-in-packages publicly for the first time at Embedded World 2022, stand 108 in hall 5 in Nuremberg, Germany, from June 21 to 23. More information may be found in the product pages for the Arm and RISC-V modules.

man @cnx – I really hate your banners ! I see you change your functions as soon as community (easylist) catches up 🙁 I have my own list that I maintain now

Yes, you can manually add the banner to your adblocker (usually a right-click) and maintain your own list.
If it gets on a public list, I will make sure the block does not work, as if that happens advertisers start to ask questions like “why has the traffic gone down?”, and in some cases cancel.

I’m trying to imagine how you thought you’d get any other response than “if you don’t like the ads you are free to go elsewhere”.

The long list of failed companies that decided they had a great business, if only they could get rid of, the annoying customers.