Amlogic processors are mostly found in TVs and TV boxes, but the company is now apparently entering a new market with A111, A112, and A113 audio processors. I was first made aware of those new processors through Buildroot OpenLinux Release Notes V20170831.pdf document posted on their Open Linux website, where two boards with Amlogic A113D and A113X are shown.

First, S400 board with the following key features/specifications: 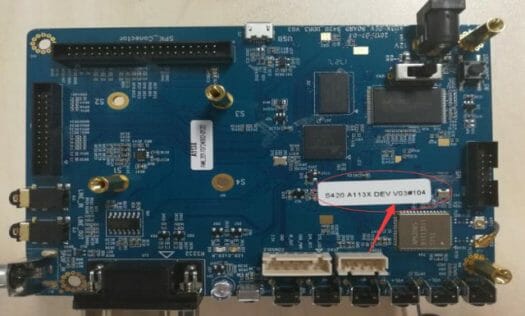 The second S420 board is based on A113X SoC, and comes with less features (no display, no Ethernet, no PCIe…), less memory:

The document also explains how to build Linux built with buildroot (you’ll need an Amlogic account), and use audio via applications or frameworks such as aplay, gstreamer, alsaplayer, shairport (Airplay), VLC, DLNA, etc…

Information about Amlogic A113X/A113D processor is lacking on the web, but I eventually found that Amlogic had a YouTube account with now a whopping two subscribers (including yours truly), and one of the two videos was an Alexa voice services demo on Amlogic A113 with what looks like a microphone array inserted on the top of the board.

Further research led me to a page in Chinese discussing Amlogic A111, A112, A113 audio processors, and revealing that Xiaomi AI smart speaker is based on Amlogic A112 quad core Cortex A53 processor, that also shows up in GeekBench running Android 6.0. They also report that A113 features the same four Cortex 53 cores, but has better audio capabilities with 8x PDM interfaces, and 16x I2S interfaces. I also found a page about a microphone array designed for Amlogic S905/S912/A112, and based on Knowles SPH0645LM4H-B miniature microphones .

Finally, I decided to go directly to Amlogic website, and they do have pages for A111 and A112 SoCs, strangely not indexed by search engines so far.

If you are interested in evaluating / playing with those processors, and cannot get hold of Amlogic boards (since they only deal with companies), one solution is to get Xiaomi AI smart speaker available for pre-order/arrival notice on sites likes GearBest or GeekBuying, and expected to ship on October 1st.

Thanks to vertycall for the tip.

They will receive mainline support too.

@Stane1983
Do you know the source code’s “nicknames” for new family/processors like MesonA or AXXBaby, or something?

If i remember correctly it’s AX(G)

Happy to see chip vendors start to include pcie in their soc. Making high performance storage and network possible on affordable products.

@Jean-Luc Aufranc (CNXSoft)
Thanks for the detailed review.

Just curious: what is the benefit of pcie on this device and why do they use it on such “crippled” platform instead of their premium S912 for instance, which would make it a nearly perfect linux box?

@vertycall
There will be… next year. Don’t have any details or specs except that it will have PCIe.

Hi,
where to find the Source Code ?