I would not usually ask myself “is there a GPU?” in a Bluetooth LE SoC, but that’s exactly what Renesas SmartBond DA1470x Bluetooth 5.2 LE microcontroller offers with a 2D GPU used to accelerate the rendering of user interfaces in wearables, healthcare devices, home appliances with displays, industrial automation and security systems, as well as consoles in e-bikes and gaming equipment.

The DA1470x also comes with a Cortex-M33 application core, a Cortex-M0+ sensor node controller, 1.5MB SRAM, and an ultra-low-power hardware VAD for always-on audio processing, as well as various peripherals. 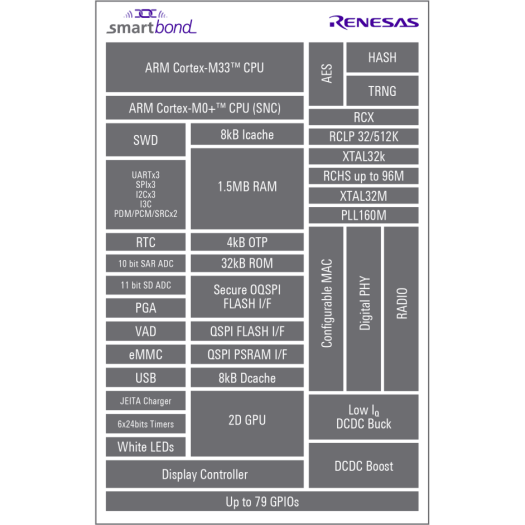 The microcontroller is programmable through the SmartSnippets Studio IDE, and Renesas also provides code samples on Github together with an accompanying Android app called Renesas SmartBond. As you’ll notice from the documentation, the chips were initially developed by Dialog Semiconductor before Renesas acquired the company last year.

… and an “Instrument Panel for Light Electric Vehicles“.

Renesas SmartBond DA1470x Bluetooth 5.2 LE microcontrollers are in mass production now, and even found in commercial products. More information can be found on the product page.