There are already several serial terminal programs such as Putty and minicom, and in recent times, I’ve been using Bootterm myself. But that does not mean there isn’t room for more and Martin Lund has developed tio serial device I/O tool for Linux.

Martin found out many of the existing tools are very modem focused or a bit cumbersome to use, so he developed tio as the simpler alternative which puts less focus on classic terminal/modem features and more focus on the needs of embedded developers and hackers. 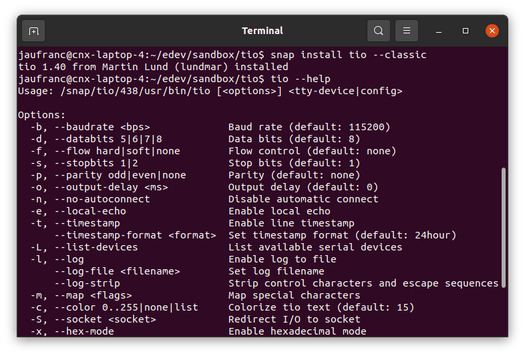 While it’s possible to build tio from source…

it’s much easier to install as a snap (and you should get updates automatically):

Let’s see the options offered with the “help” parameter:

I’ve connected a USB to TTL board to check it out:

It’s detected properly, but not exactly in the usual way since the board is attached to /dev/ttyUSB0:

Anyway, I was still able to use it with Khadas VIM4 board after setting the baud rate to 921600:

I could launch the program before booting the board to get the full log. It’s actually fairly similar to bootterm, including the options for timestamps:

tio does however offer redirection of I/O to sockets for scripting or TTY sharing, hex mode, and changing the text color. 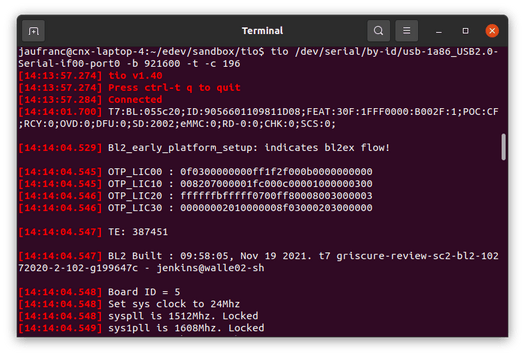 You’ll find all details about tio serial device I/O tool on the project page on Github. As a side note, it’s not the first time we’ve written about Martin’s open-source tools, as we previously covered LXI Tools made for “LAN eXtensions for Instrumentation” compliant test instruments.

Interesting, thanks for sharing! I have not yet implemented the config file management for macros and mapping of serial ports to configs into bootterm, so I think tio could possibly be a nice complement for certain use cases. It’s always great to have a variety of tools at hand.

Honestly, if it just works and is able to understand color codes etc. that would be a huge win. There are certain scenarios other implementations struggle with.

Usually you have only two choices, either you do not interfer with what you receive and it works fine, or you start to interfer then you need to completely manage the terminal and deal with everything otherwise the tiniest miss causes noticeable glitches such as copy-paste breaking on end of line and such things. That’s also when you notice you can’t scroll up typically (e.g. minicom). bootterm chooses the first approach and keeps colors and scrolling history working fine; that’s also why you can’t have pop-up menus. Tio seems to have chosen the same approach. Quite frankly, I think anyone… Read more »