Cheap ELM327 compatible OBD-II Bluetooth adapters that connect to your car for diagnostics and retrieve engine and other data are available all over the Internet. But today, we were reminded that many are fake with a partial implementation or not working at all.

ELM32 was originally created by Elm Electronics – which recently decided to close shop – and based on Microchip PIC18F2480 microcontroller to provide the data through a UART interface, but copies have been around for years, and I myself bought a cheap ELM327 compatible ODB-II Bluetooth adapter back in 2013, but I never managed to make it work.

Those were brought back to my attention today, as Jasbir bought two such fake ELM327 adapters on Aliexpress for under $3 each. The device reports itself as ELM V2.1 with firmware version “TDA99 V0.34.0628C”, it’s extremely buggy and certainly not feature-complete for an ELM V2.1 device.

When he opened the device it was mostly empty with just a tiny board. 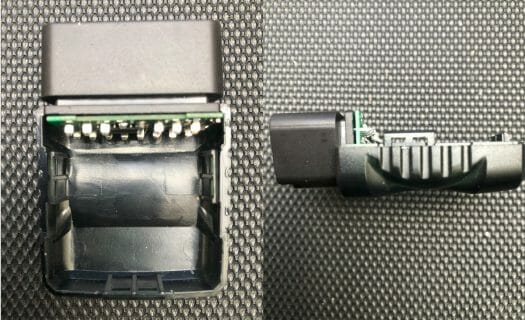 But he was expecting a board with a microcontroller (the round chip covered with epoxy), a Bluetooth chip, a CAN transceiver, and other chips as shown in the photo below.

Let’s have a closer look at the tiny board in the fake ELM327 adapter. 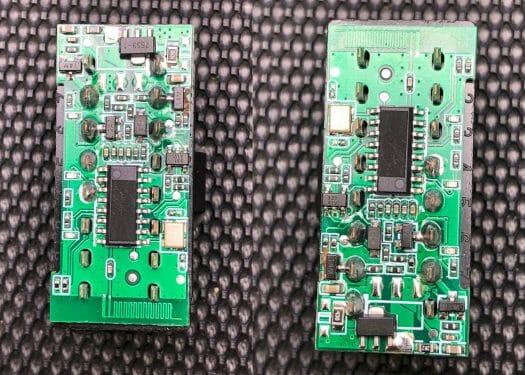 There’s apparently a single 16-pin SOP chip connected to a 24MHz crystal that handles everything…, and that probably means a software CAN bus implementation prone to errors and limited data rates.

Since the microcontroller is unmarked, Jasbir spent some time trying to find out what it is exactly, and it appears to be the same “QBD255” MCU as found in the Thinmi C OBD2 ELM327 adapter whose PCB is appropriately named “ELM327-Cheap”. QBD255-based ELM327 adapters do show on a web search on Amazon and other shops, but when clicking on the link, they’ve all been taken down.

However, it’s unclear whether QBD255 is an actual MCU part, as there’s a dearth of information about it. There is another SOP-16 Bluetooth microcontroller that looks similar: Chenbing AC6939B used by ElectroBoy on Hackaday.io with information in English, but I can’t find any reference to AC6939B in ELM327 devices.

It’s close to impossible to spot fake ELM32 OBD-II Bluetooth adapters from the description or photos from an online shop (unless the internal photos are shown and/or the chip is listed), but if a device just costs a couple of dollars it might not work as expected, and if unsure, it’s best to purchase from a shop where you can return the items easily.

Simply buy ELM327 V1.5 adaper version if you want it for an old car. It’s based on a cloned original ELM firmware modified to run on a cheaper microcontroller.

2.1 versions on ali are a 100% chinese product with chips from the bottom of the trash can and some broken in-house developed firmware.

Update, I suspect the chip may be the Jieli AC6329F.

Jean-Luc, good that you spend an article on fake stuff. Please more.

Just buy the cheap fake ODB-II dongle for the case and connector and replace the bad PCB with something like this:

* ESP32 CAN board fits into OBD-II dongle, supports auto shutdown

Since I have a few of these, I’ve found the “ELM327 Identifier” app on the Google Play Store helpful for determining these devices capabilities / limitations. Some are simply broken e-waste though as you rightly point out. 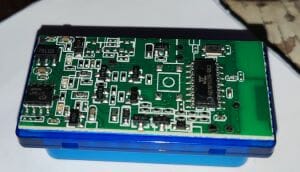