New Cosmos’ DeNova Detect is a wireless natural gas alarm that works with the Amazon Sidewalk network designed for low-power, low-bandwidth IoT devices in and around the house, benefiting from free connectivity thanks to the installation base of Amazon devices such as the Echo Show acting as gateways.

DeNova Detect does not require wiring to mains, and the device is expected to achieve an extended battery life of seven years, so customers can choose the optimal location for a gas alarm in their homes without needing to be close to an electrical outlet. There’s no need to have an additional gateway such as with LoRaWAN solutions as well as the customer owns one or more Sidewalk-compatible device. 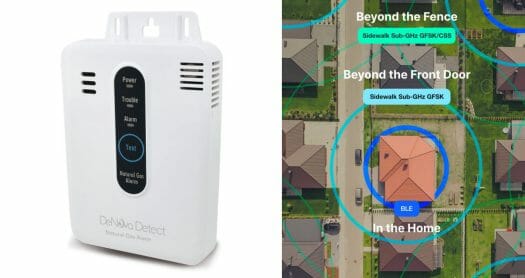 Note that Amazon Sidewalk is currently deployed in the US only with global expansion planned for later. Amazon Sidewalk relies on Bluetooth LE inside the home, Sub-GHz GFSK on the sidewalk/around the house, and Sub-GHz CSS (Chirp Spread Spectrum) for a longer range beyond the fence of a typical house. 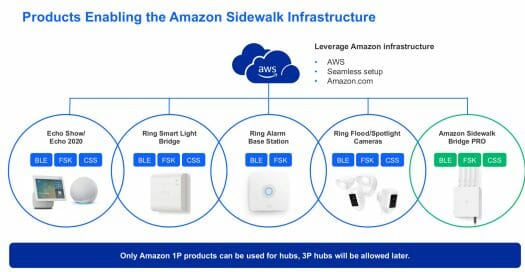 The alarm can be installed to a pipe using a cable tie or to the wall mount with hardware and must be close to the ceiling and at least 1.5 meters away from cooking appliances or cooktop hoods, at least 3 meters away from other gas appliances.  You’ll also need a Sidewalk hub that can be the Echo Show/Echo 2020, Ring Smart Light bridge, Ring Alarm base station, Ring cameras, or an Amazon Sidewalk Bridge Pro gateway.

The Silicon Labs Pro Kit for Amazon Sidewalk is sampling now, but general availability is only planned for the second half of 2023. As noted earlier, while any company can develop an Amazon Sidewalk device, Amazon Sidewalk connectivity is currently only available to end consumers and endpoint devices in the US. More details about the devkit, Amazon/Silicon Labs partnership, and how to get started can be found in a blog post on Silicon Labs website, while additional information about the upcoming DeNova Detect natural gas alarm is available on the product page.

Sidewalk will be available through the Quectel KG100S module, or BG21/BG24 chips directly in combination with Semtech RF chips. 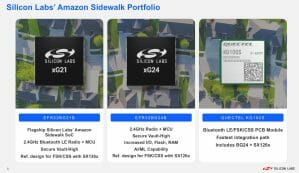