We’ve seen two announcements of high-end RISC-V cores this week with the SiFive P670 and Andes AX65 processors each with a 4-way out-of-order pipeline, but Alibaba’s T-Head Semiconductor Xuantie C908 is a little different with a dual-issued, 9-stage in-order pipeline and support for the RISC-V Vector extension acceleration targeting mid-range AIoT applications.

The C908 64-bit RISC-V core adopts the RV64GCB[V] instruction and complies with the RVA22 profile for better compatibility with Android and other “rich” operating systems. The company says its performance is between the C906 and C910 cores introduced in 2020 and 2019 respectively. 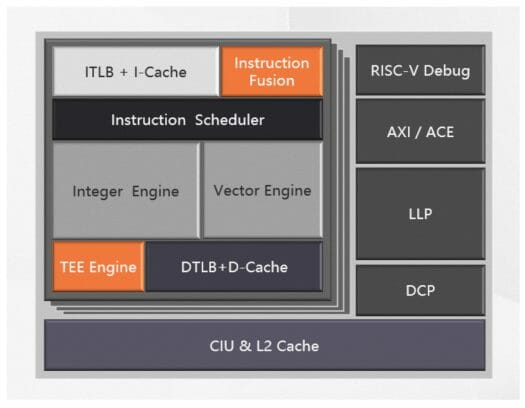 The company also provides a performance comparison against the T-Head C906 single-issue in-order processor, albeit no data is provided showing how it compared to the higher end C910. 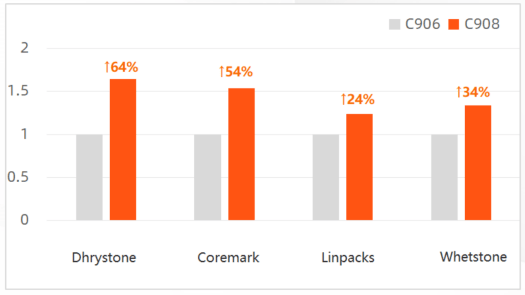 The C908 offers 24 to 64% performance improvement against C906 with synthetic benchmarks such as Linkpacks, Coremark, Whetstone, and Dhrystone. But we are not told anything about the manufacturing process and frequency of the cores under test, so the results may be meaningless, unless both cores used the same node and frequency.

Having said that, the XuanTie C908 can run at a frequency of up to 2 GHz and offers a dynamic power consumption as low as 52.8 mW/GHz per core using TSMC’s 12nm process. The energy efficiency of XuanTie C908 has been improved by more than 20% compared to that of XuanTie C906 in (undefined) typical scenarios under the same frequency and process constraints.

The new C908 core should eventually be listed on the T-Head website, but at this time, the only public information I could find was on the RISC-V blog.

Not quite sure how that pipeline became people! LoL