rbaron’s b-parasite is an open-source hardware Bluetooth LE plant watering sensor that can measure soil moisture and ambient temperature/humidity/light and works with ESPHome, Home Assistant, or any macOS or Linux platforms including the Raspberry Pi boards.

It is based nRF52840 multi-protocol wireless microcontroller, so stanvn decided to add Zigbee support to the b-parasite through the “Zigbee Plant Sensor” firmware based on the Nordic Semi nRF5 SDK for nRF52 series of SoCs and working with Zigbee2MQTT. 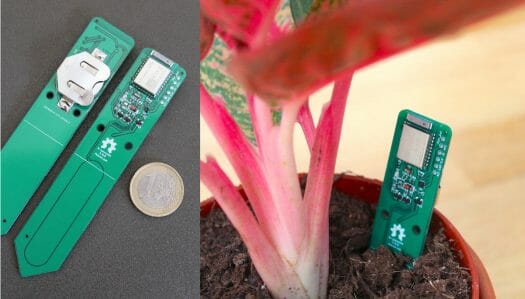 Let’s have a look at b-parasite hardware specifications first:

The GitHub repository for the board contains the KiCad schematic, layout and fabrication files, the firmware code based on the nRF5 SDK, data for testing and sensor calibration, an ESPHome-based BLE to MQTT bridge, and a 3D printable case, as well as instructions.

With the default firmware the b-parasite plant sensor will periodically measure the soil moisture, light intensity, air temperature & humidity and transmit those values via Bluetoooth LE to a BLE to MQTT gateway such as the GL.INet GL-S10 we tested earlier this year, and the data would then be forwarded to the cloud for processing there. Once the data has been transmitted to the BLE to MQTT bridge, the device goes into deep sleep until the next measurement. 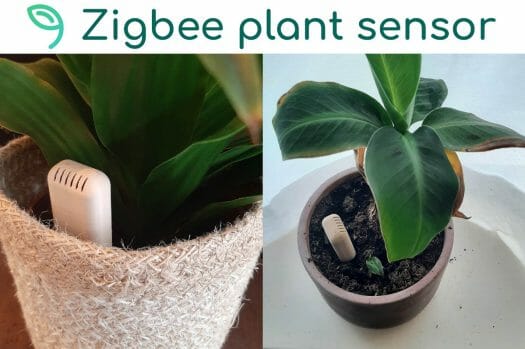 But as noted in the introduction, it’s now possible to convert the b-parasite Bluetooth LE device into a Zigbee plant sensor with stanvn’s open-source firmware. It is shown above housed in a 3D printed case. The Zigbee plant sensor firmware supports all sensors in the hardware and works with Zigbee2MQTT meaning integration with Home Assistant and other home automation frameworks should be fairly easy. Battery life was estimated to be around 600 days with measurements and transmission every 2 minutes.

One downside of the current hardware is the lack of a factory reset button, so stanvn is also working on his own hardware. There are no details at this time, but he asks interested people to fill out a form to register their interest and be contacted once the hardware becomes available, but it looks like he might also launch it on Crowd Supply. If you are interested in battery-powered plant sensors in general, you may want to check out a long discussion about this topic on Home Assistant forums.

The BLE version is also compatible with Theengs gateway, OpenMQTTGateway, and the future new version of the Theengs App

Not sure how linear these products will holdup with BLE, wifi and/or 802.15.4. 802.15.4 does have legacy support in some regards, where commonplace functionality (moisture readings, light intensity, temp and humidity) will be useful for decades, with some trinket devices obsoleting themselves (bluetooth 1.0/1.2, 802.11b, etc) when 10baseT (for example) to replaceable com module(s) keeps 1998,2022 or 2050 commodity functionality going strong well beyond a few spec versions (usually full of security vulns and never updated again). Love the site and all of the gadgets, gizmos and innovation though, but just a casual observation of new buzzwords like thinwire 10baseT… Read more »

FYI, the BLE Monitor custom component for Home Assistant will soon be replaced/migrated to Home Assistant’s own native Bluetooth integration that as Home Assistant 2022.8 and later has (improved) support for passive BLE devices directly in Home Assistant. For each brand, a core BLE integration will be developed, such that maintanance can be divided over more people, using the latest Bluetooth packages (bleak). See —> https://www.home-assistant.io/blog/2022/08/03/release-20228/#first-class-bluetooth-support and https://github.com/custom-components/ble_monitor#important-announcement-about-the-future-of-ble-monitor